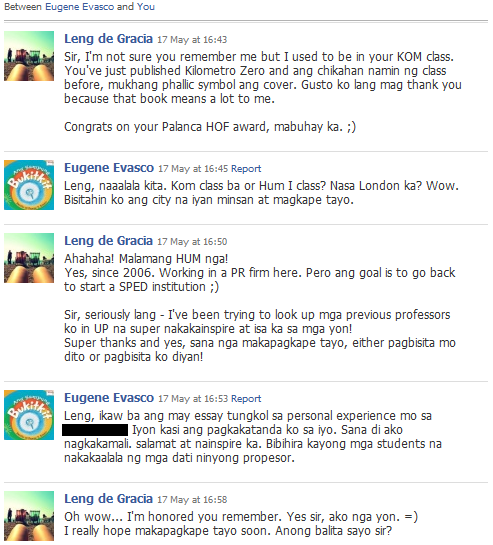 When I attended college, I still wasn’t sure whether I chose the right course. Because of this, I had my eye on attending Humanities 1 (Literature, Society & the Individual) to immerse myself in lectures that actually interested me and not my parents/ mates. However, when UP introduced the Revitalised General Education Program, I realised I couldn’t take the course because our block was assigned KOM 1 (KOMUNIKASYON) as opposed to other BA blocks who got COMM 1 which was a pre-requisite of another pre-requisite of the elective.

So unless I waited another year to take the pre-requisites or exerted more effort and give up training time with the UP Street Dance Club, there’s just no way. During those days, dancing was such a huge part of my life (read: sanity) and despite the long hours of training after classes I was not willing to let it go. So I weighed my options and realised I can actually take Humanidades 1, the Filipino version. The only thing about this was that… I read the syllabus and got a pretty good mindfuck. Pucha naman and all that.

Don’t get me wrong. Proud ako to be Pinoy at marunong akong magsalita sa Filipino. But we’re talking academics here and as much as I wanted to have a really good education, I wanted to have decent grades as well. And if I relied on my Filipino to give my GPA a boost then I’d’ve been in trouble because UP has such high standards and I’m ashamed to admit – and I’m really not proud of this – that my grasp of the language was just normal. Conversational. Not in depth at all. However when you push to learn, you learn a lot and during that time I thought I was ready for an intellectual challenge. Game face on.

I’m glad I took the class because my professor, Sir Eugene Evasco has made a huge impact on the choices I’ve made since then. Sir Euge was an awesome teacher. He was approachable yet firm, friendly yet respectable, immensely intelligent yet so down to earth and relatable. He made the class so interesting and the lectures so engaging that despite the highfalluting words in Filipino, naiintindihan namin siya. Better yet, I felt the significance of the pieces we studied. Sir Euge made me feel that it’s okay to talk/write the way I do (hindi naman konyo like tusoktusokthefishballsohmygoshwhuuut) and that doesn’t make me less Pinoy at all. And because of that I made sure I exerted heaps of effort in class.

Sir is a Palanca Award Hall of Famer. One of my favourite Filipino books is his collection of poems, Kilometro Zero. Ganda ganda ng poems niya. They exude a sense of longing, a feel of sensuality and a beautiful kind of raw honesty. Sir’s loud and proud to be gay and his work was so purely written na kahit sometimes I was struggling with his  words (malalim kasi talaga sometimes) you could still understand the context and feel the emotions. Galing!

I’ve managed to track him down on Facebook and I was absolutely stunned that he still remembers me. I never really saw him since 2002 and I can’t believe he remembered me through my work! I only know three other professors from my ‘younger uni days’ through my work (Sir Gerry L + Sir Siao C), and this was tracking back to 9 years ago, guys. Amazing. It’s good to be remembered, I suppose… but I guess even if he didn’t remember me, I would’ve still sent him a message of thanks. Because he really inspired me as a professor and most of our professors deserve to be remembered and also deserve to know that they really had an impact in our lives because of the lessons we’ve learned from them – in and out of class.