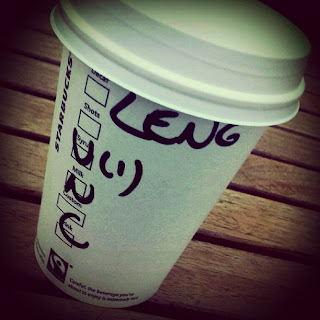 I first had coffee when I was 8. Day after Christmas, my mother was making a pot of fresh brew (a gift from a family friend). She added some powdered cream and three teaspoons of sugar and the aroma was insanely delicious. She took a sip whilst reading the papers looking all chic, cool and grown up. I want to look like that, I thought, so I asked for a cup and she said I was too young, that I should have some cocoa instead. I begged. And begged. And begged until she said I was allowed to have a sip from her cup. I finished half of its contents. And fell ill for the rest of the week until New Year’s Eve. I stayed clear of coffee since then.
I started drinking again when I went to UP. At first it was seriously to keep me up whilst studying. Long group study/planning sessions would then be arranged at cafés near uni. And then it became more of a networking/social thing – ‘Hey, let’s catch up over coffee!‘ or ‘Let’s go out on a date… over coffee!‘ or ‘Let’s do coffee to discuss business… and sports.’ I don’t think I’ve ever gone a day without coffee since I was 17. I really don’t.
I became dependent on the stuff when I went to Bournemouth and my taste buds evolved from three teaspoons of sugar to syrupy pretentious sounding coffee to just plain black fresh brew. Preferably Italian or Colombian, dark roast. Strong and bitter, please. I used to drink a big cup in the morning and a big cup in the afternoon. That eventually changed to 3 cups in the morning, 2 cups in the arvo and a cup after dinner. I’d eventually go on days without much sleep, semi-crashing in the morning only to depend on coffee again for a boost. Long story short, I was consuming way too much than I should and I wasn’t really drinking enough water (at times I wasn’t even drinking any) to kind of dilute it at all. I needed to stop before I ODed on caffeine.
30 days ago I decided to go cold turkey. It was surprisingly easier than I thought. And the benefits have been amazing:
Do I miss coffee? I miss the taste, and the smell of freshly brewed coffee with a hint of cinnamon bread is still one of my favourite scents. I miss the buzz and the boost I get from it. However, there are a lot of alternatives that give me better benefits. I’m sure I’ll have coffee again eventually but I’d like to see how far I can go without. And when I do, I’m pretty sure I can drink it, finally, moderately. Everything in moderation, even moderation.