Wedding planning has been quite an interesting exercise. I didn’t realise our married friends were serious when they said we’ll argue and fight about silly little things like flowers and feathers and tie colour. Plaid Boy and I are miles and time zones apart so it doesn’t help discussing all these bits and bobs at a mutually convenient time: odd hours when we’re either starting or ending a long day at work. So yes, rows are inevitable, but who would want to squabble about fluff?!I do, however, like that we’re working on this project together and by doing so we’re learning to communicate and to compromise better. Case in point: we’ve finally agreed on colour schemes we like. This is a milestone given the primary depth of our colouring skills and the amount of time we’ve spent discussing the issue of who decides on what. At least now we can park our ladles and let our planners stir the broth a bit while we switch focus to the more important project: planning a married lifetime together. Surely that’s more important than a silly little gala, aye?

So… Plaid Boy and I discussed our culinary itinerary for my visit. After weeks of deliberation and way too many choices we agreed on a few key places but I also requested for a three-course sit-down at home because there seriously is nothing like a love letter on a plate. Here’s what we had… 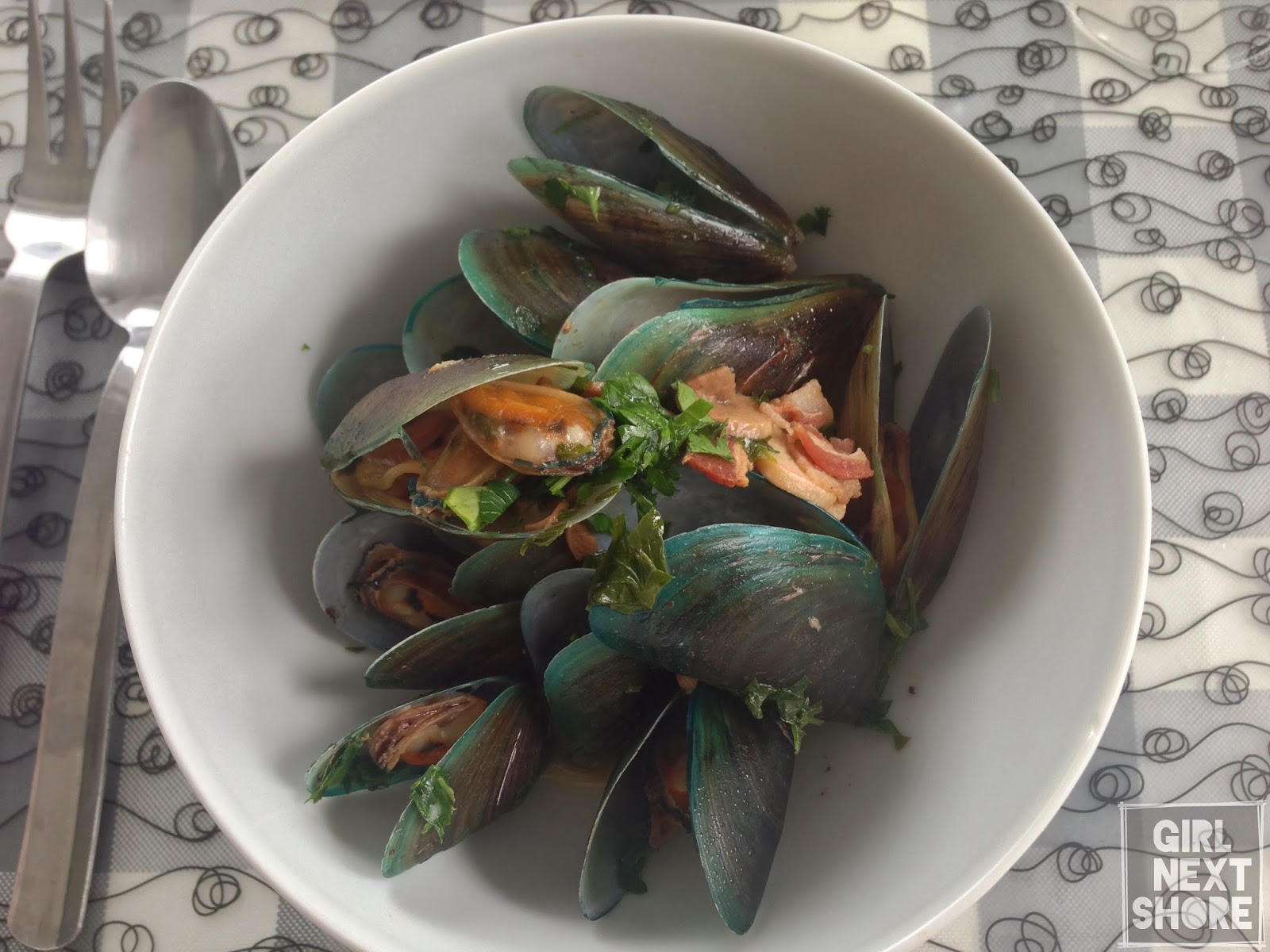 First course: moules in riesling reduction
Given that the mussels were just a teeeeeeensy bit over these were pretty good. The broth was super delicious, I had to stop myself from drinking it from the bowl. It had a nice salty (he added bacon bits!) and ever so slightly tangy taste, which lifted the flavour a lot (and gave him 100 extra pogi points to play with). Who cares about the butter content? This was amazing broth, people. Such a good way to start a meal!HOW TO: Grill up some bacon until crispy. Set aside. In a large pot, combine 1 1/4 cups of Riesling, 1 1/4 cups of water, two cloves of chopped garlic, a diced medium onion, parsley and bring to a boil. Add 2 kilos of mussels, cover and cook until the shells open. Transfer the mussels to a bowl. Strain the broth and return it to the pot. reducing it down to about two cups. Add some butter and simmer until the broth thickens. Add the mussels back, leave for a few seconds and serve in bowls. Garnish with bacon bits and chopped parsley. 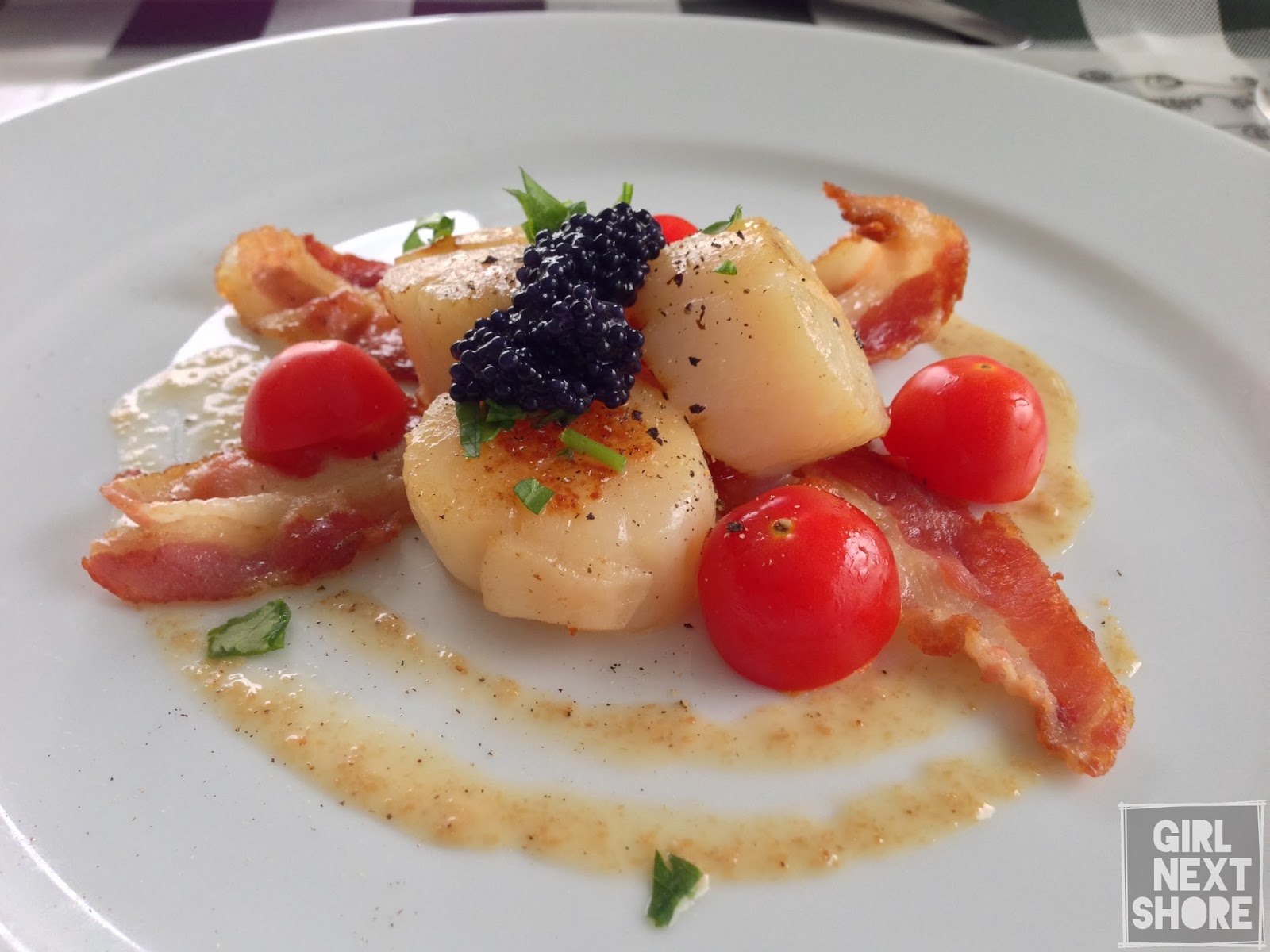 Second course: bacon ‘unwrapped’ seared scallops topped with caviar, cherry tomatoes, sesame dressing
I liked this dish a lot. Plaid Boy seared the scallops whilst they were wrapped in bacon so there was slight smoky, salty flavour infused with the sweetness of the seafood. The sesame dressing gave the dish a fuller, creamier texture and I thought it was going to be a one-note wonder but he was smart enough to add tomatoes. The acidity from these little yummies balanced it all out. Good job!HOW TO: Wrap scallops with bacon strips using some toothpicks to hold. Set aside whilst you fry up some more bacon until brown and crisp. Remove bacon and transfer to a paper-towel-lined plate. Add scallops to the pan and season with salt and pepper. Cook until bacon is crispy and the scallops are browned. Unwrap the scallops and transfer to a dish on top of the first set of bacon you cooked. Garnish with some roasted cherry tomatoes and sesame dressing. Top with a bit of caviar. 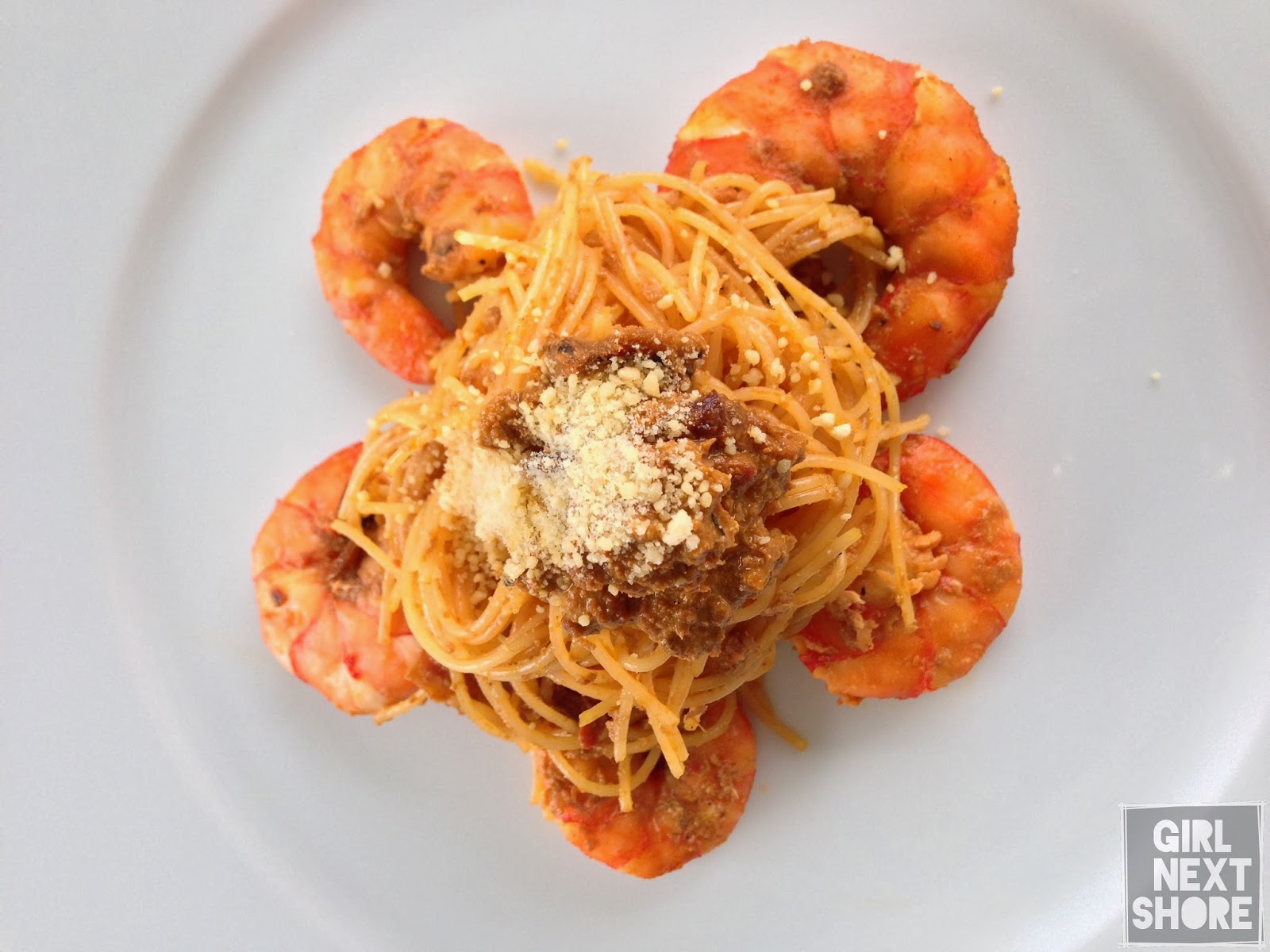 Third course: Plaid Boy’s famous angel hair aligue pasta with tiger prawns
I can never get enough of Plaid Boy’s aligue pasta. Aligue, or crab fat, is that orange bit you find inside a crab’s shell. I realised that he cooks this for me each time I see him. He also made a massive serving at the barbecue I hosted after our engagement day and my friends LOVED it. I do too, but not as much as I love the chef.
HOW TO: Cook some angel hair pasta until al dente. Whilst you’re doing that, sauté some garlic and onions in a bit of butter. Add the prawns (ideally shell-on, but if you prefer it without the shell, you can do so too) Stir in two table spoons of crab fat (you can buy tinned ones in Asian shops), adding half a tin of chopped tomatoes (or three dollops of tomato puree). Add a tablespoon of butter and cook until the prawns are red. Stir in the pasta. Serve with grated parmesan. Sprinkle with some lemon juice to balance the richness of the sauce!
As much as I’d like to take credit, he single-handedly cooked everything. Admittedly my skills in the kitchen are rather limited (I almost gave him a heart attack when he saw me chop onions) but I am inspired to do more just by watching him prep and cook. He’s put so much thought, care and finesse (operative word: plating) into this meal so my belly and I were happy, appreciative guests.
We washed it with some more good Riesling and as I emptied my glass I felt really content, really blessed. It wasn’t exactly perfect, but it was so full of love and so full of greatness that I knew then the best of our home-cooked dinners is yet to come.
Thank you, Plaid Boy. If this meal is an indication of what married life is with you, then I’m glad and super excited that you are my executive chef (and I, your sous).