Hello buddies! Excuse the slight hiatus, I’ve been on an Asian holiday where the weather was constantly warm (save for Hong Kong!), food was offered in abundance and salt is known to mankind! (Sorry, Londoners… but I really think our restaurants still need a bit of education on spice.)

Anyway. My first stop was Singapore. Plaid Boy took me out for brunch at Wild Honey at the Mandarin Gallery (not to be confused with Wild Honey in Mayfair despite the similar font type) during the first leg. I’m a massive fan of brekky/brunch food despite my egg abhorrence gene so WH was a great choice for noms as they serve breakfast all day. 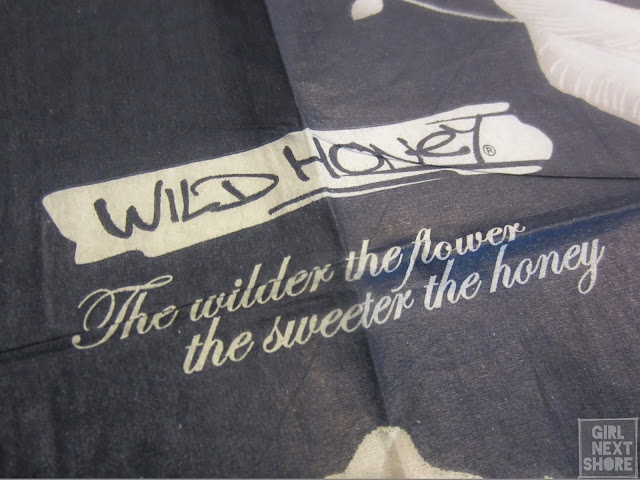 Who knew a simple serviette can elicit such profoundness?
The place has a cosy feel, similar to the new restaurants popping around Soho (LDN). Part industrial with the exposed ceiling, part quirky with the unmatched furniture, all in all homey. 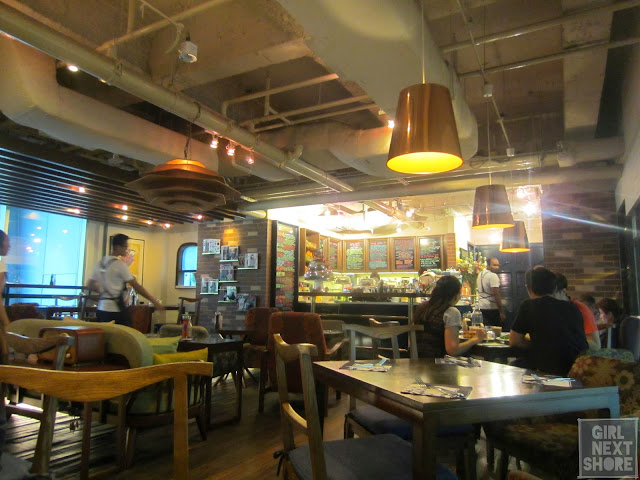 We went for proper brunch service. The menu’s all up by the counter, on chalkboards and on touchscreen pads you can have a play with to decide what you want. If you’re a bit indecisive (ie someone who takes forever to pick his food like me) I suggest you look at the menu online so you won’t hold up the queues. 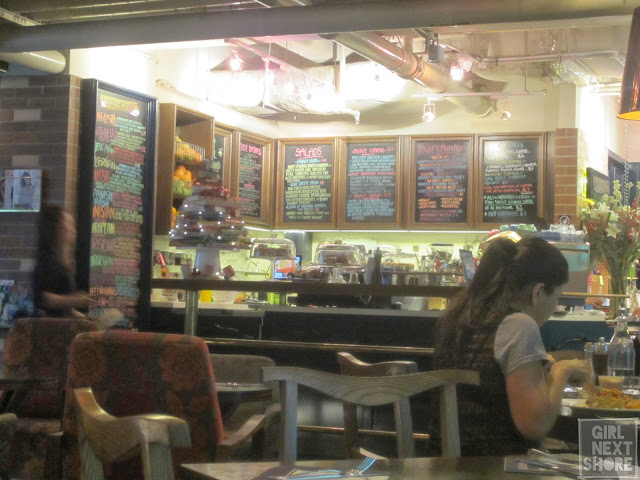 I thought this lamp was tres cool. 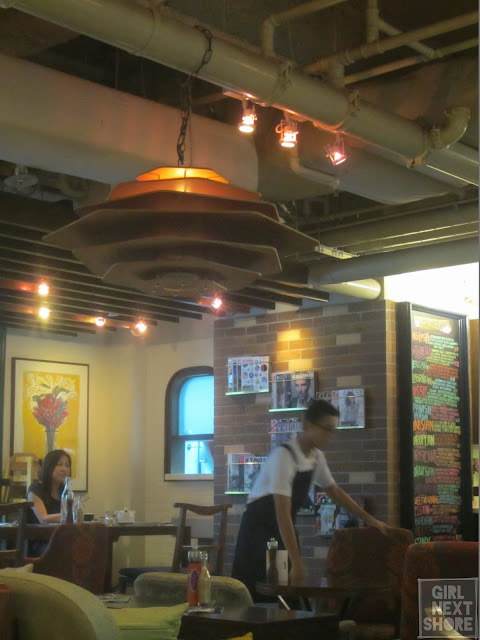 The setting was so relaxed and so chilled out. I seriously didn’t mind being sat close to the other tables because like Lantana (a brunch place I love in London), the punters here are well chilled out. 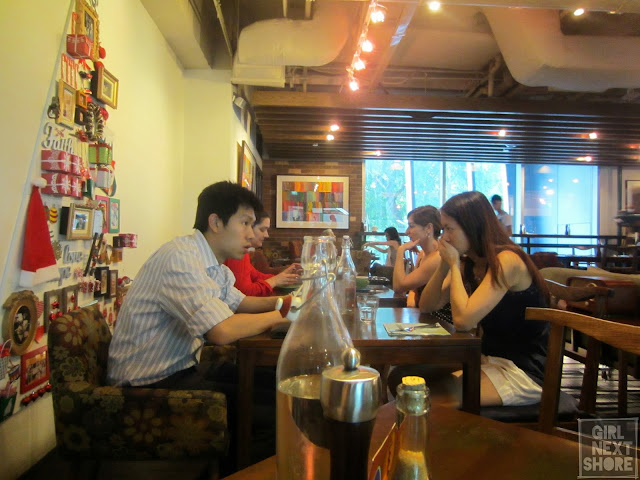 My plaid boy and his cappuccino =) 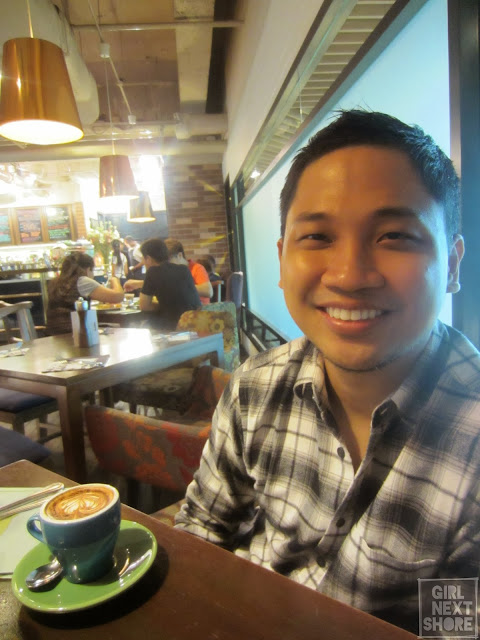 Plaid Boy’s Spanish Hash (SG$ 24) is a beautiful plate of diced chorizo, corned beef & potatoes, topped with two perfectly poached eggs, hollandaise sauce with grilled ciabatta. I tried it sans egg and the creamy, silken sauce just bound the salty meat together. This dish apparently started off as a special which became a permanent fixture on the menu as it was such a hit. I can taste why. 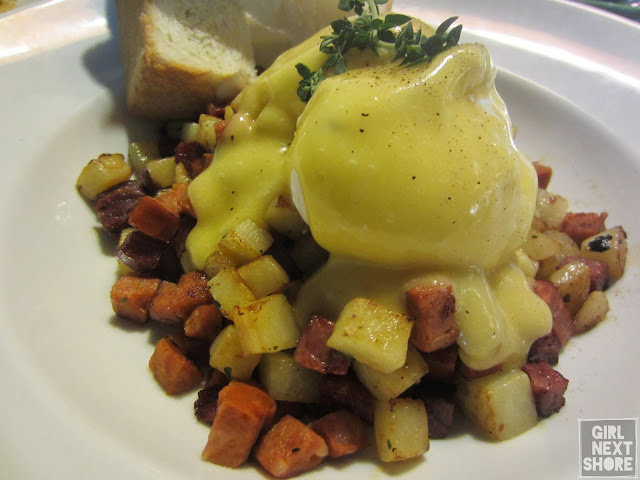 I got the Aussie ($30) which, at first, looked like a little unassuming plate of steak and egg… 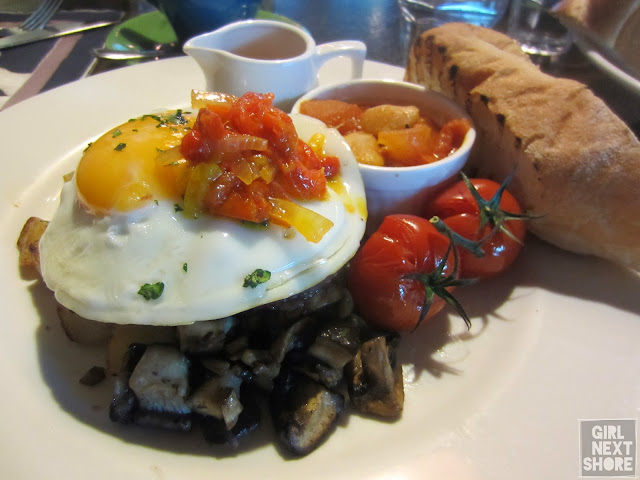 I gave my egg to Plaid Boy and there it was… 120g of medium rare Australian rib-eye goodness. It came with hefty sides of breakfast potatoes, sauteed mushrooms, a pot of Dad’s baked beans, confit peppers and roasted vine tomatoes plus a slice of grilled ciabatta *whew* 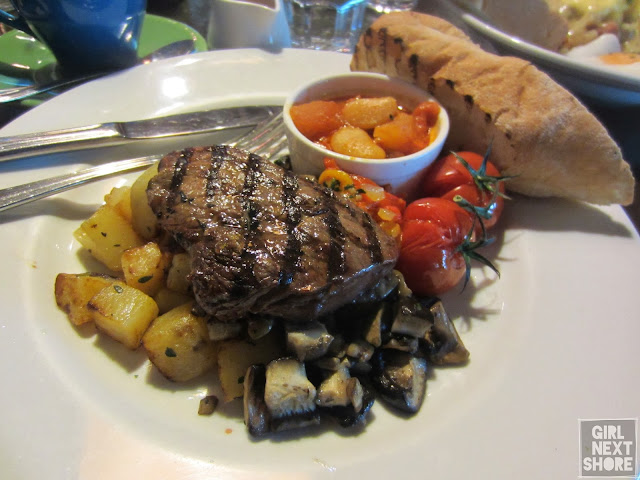 They cooked the steak to a really good medium rare. Seasoning was at par, and all the sides were just delicious. That pot of Dad’s baked beans was the winner – it’s not the usual thing you put on your beans on toast fare. It had a little bit of a kick to it and had actual, proper depth. 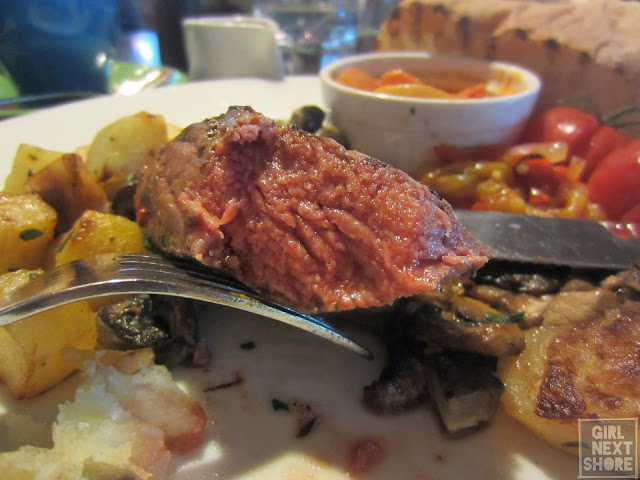 We enjoyed our meals so much we visited again during my second Singapore leg a few weeks later – for dinner! It was table service this time around, which was handy as you get more time to scan the menu without the pressure of holding up queues.

It was still Christmassy in the new year… 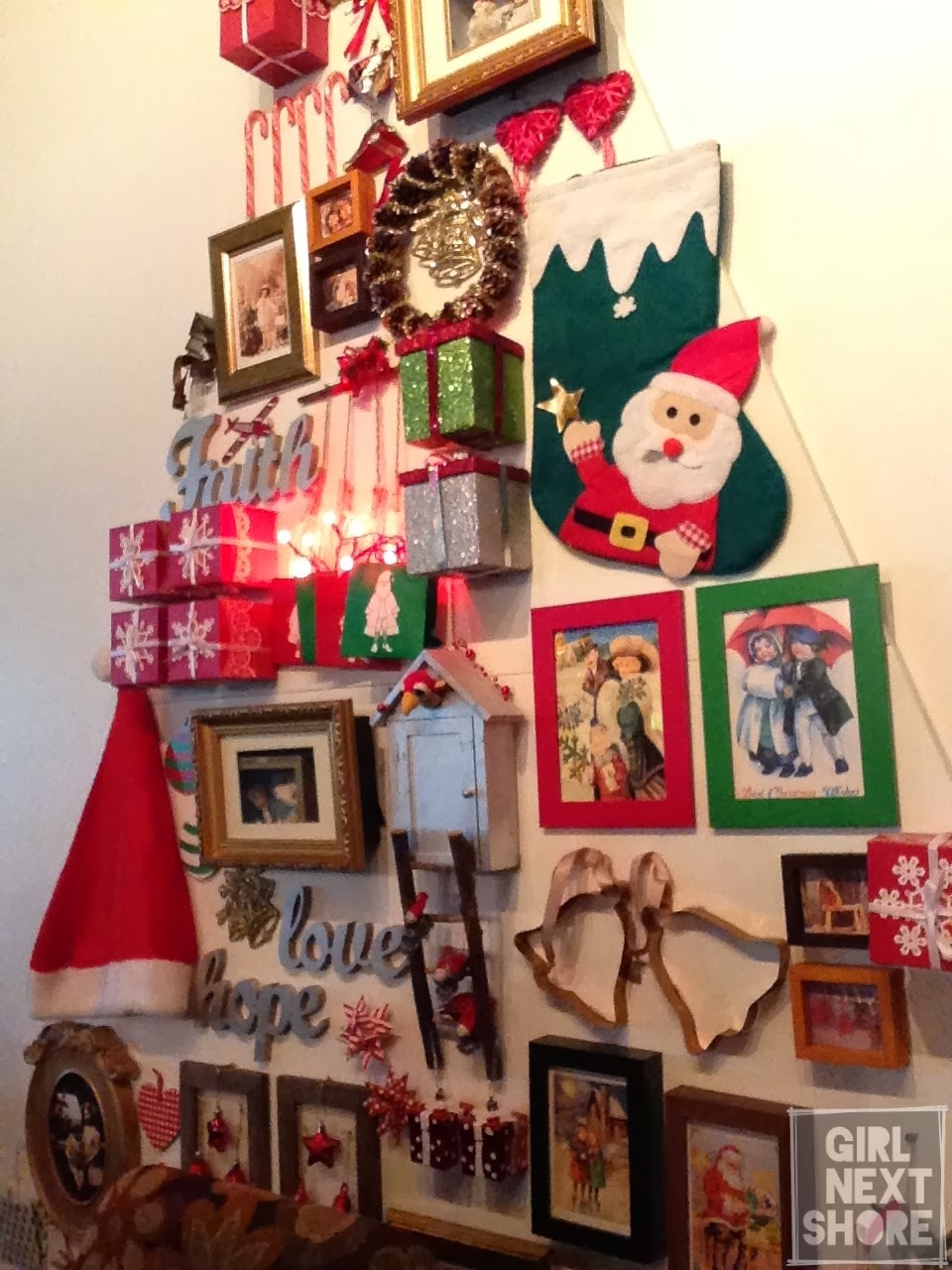 We ordered some sides, which were done in massive servings. Gotta have some asparagus ($6)… 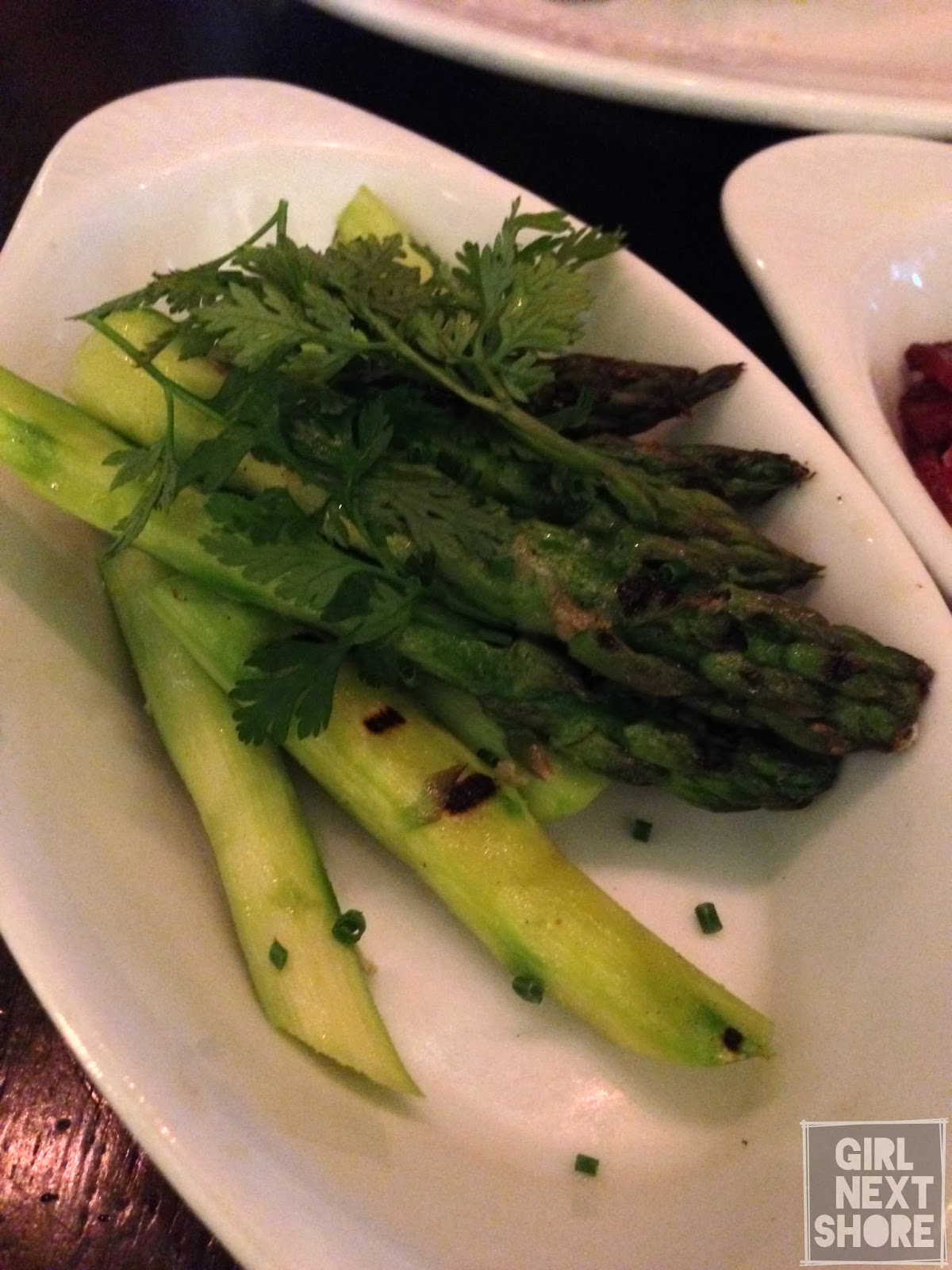 And of course some back bacon rashers ($8). I was so surprised about how much bacon they served. This seemed like a full packet of bacon you get in shops in England. We managed to finish the whole tray, though… but I only had ONE piece. Haha! We also had more of those delicious breakfast potatoes. I’m not sure how they cooked them (boiled then roasted, perhaps fried?) but they were enjoyably crispy on the outside and fluffy inside. These weren’t oily at all – such a good way to starch up your meal. 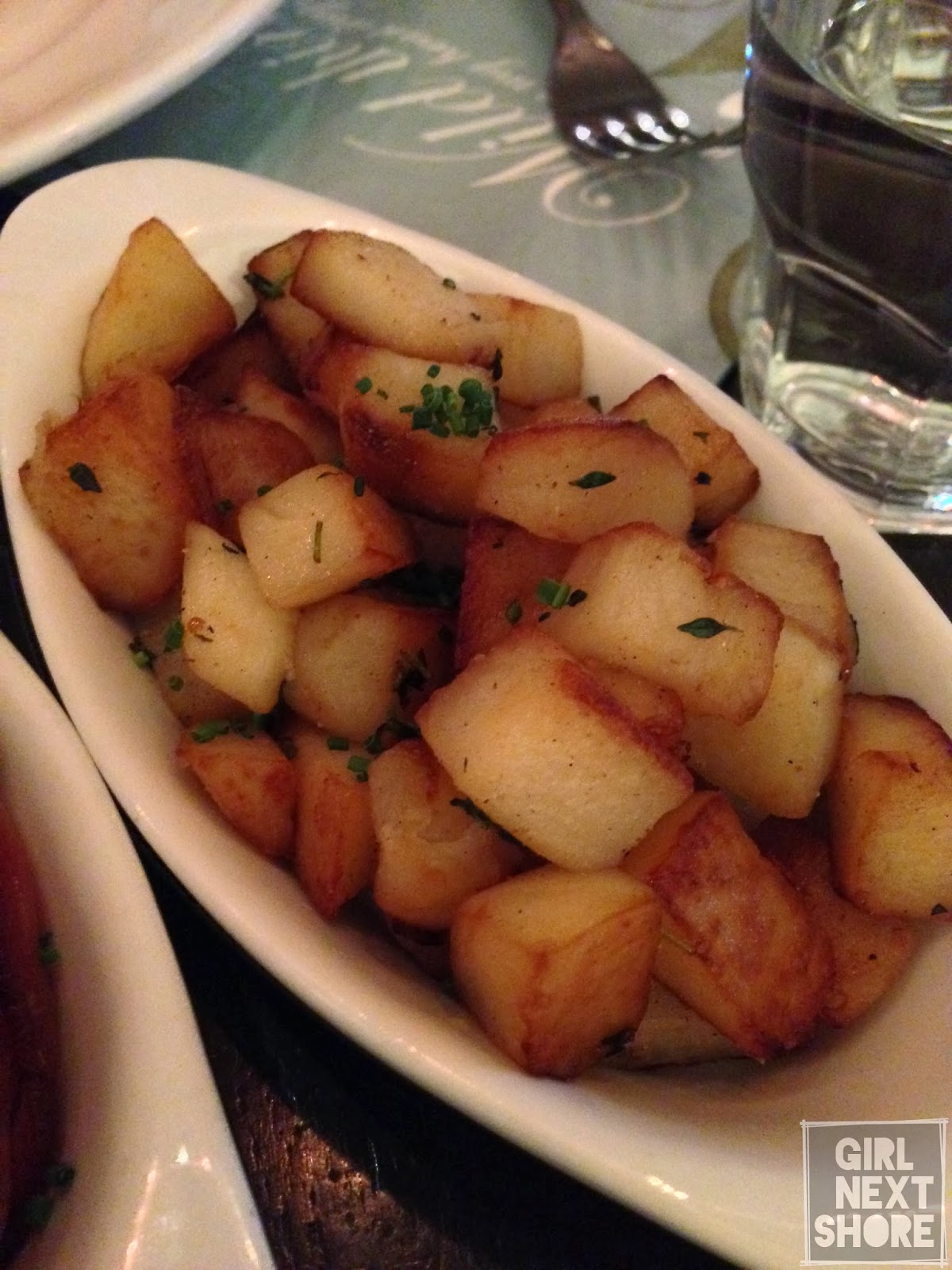 Plaid Boy wanted the same Spanish Hash, which they ran out of so he ordered the Norwegian ($26) instead. Two beautifully poached eggs wrapped in smoked salmon on top of avocado and asparagus and a good slice of brioche. I tried it again sans egg, and though I know this is not the full experience of the dish I can honestly say I loved flavour. The texture was creamy though, but I suppose our side of brekky pots took care of that. 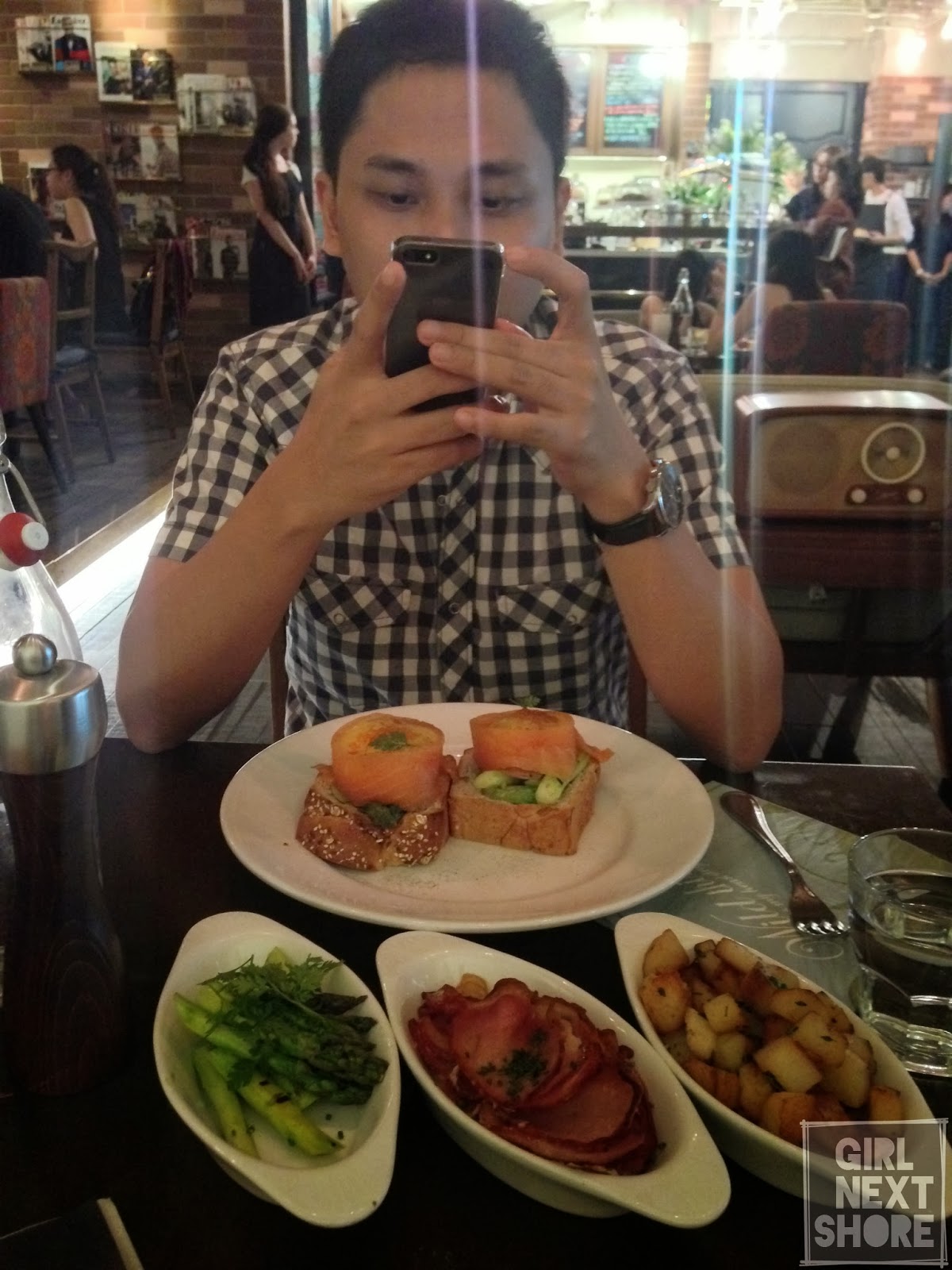 As for me… I had a full run down of the menu. Choices without egg were limited – this is an all-day brekky place after all – so I toyed with the idea of having a steak sandwich or some pancakes or a salad or a light fish meal. But, creature of habit that I am, I decided to stick with the Aussie.

It hurts me how pretty this plate of food is. 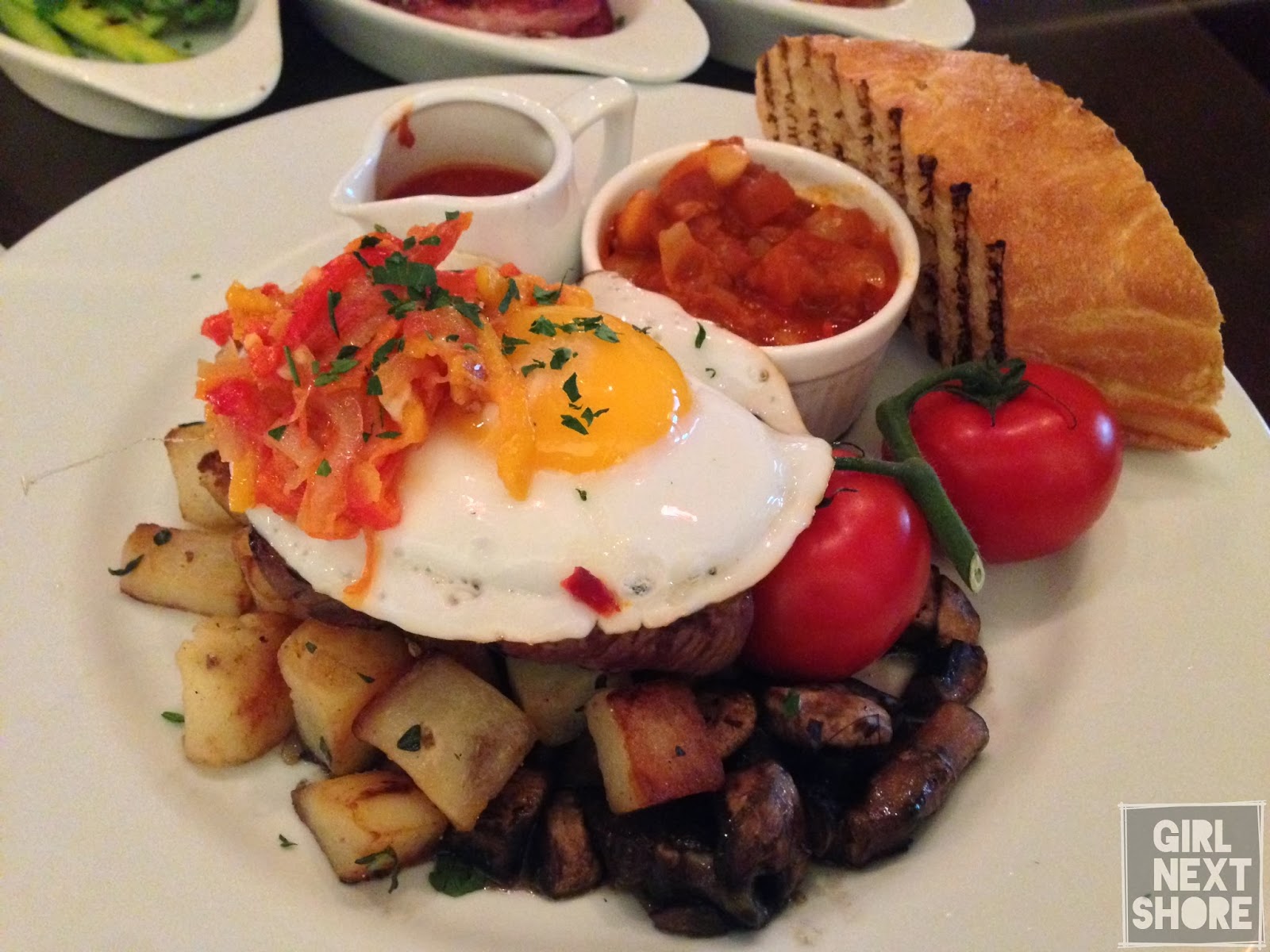 But it seriously made me a happy girl with a happier belly again. 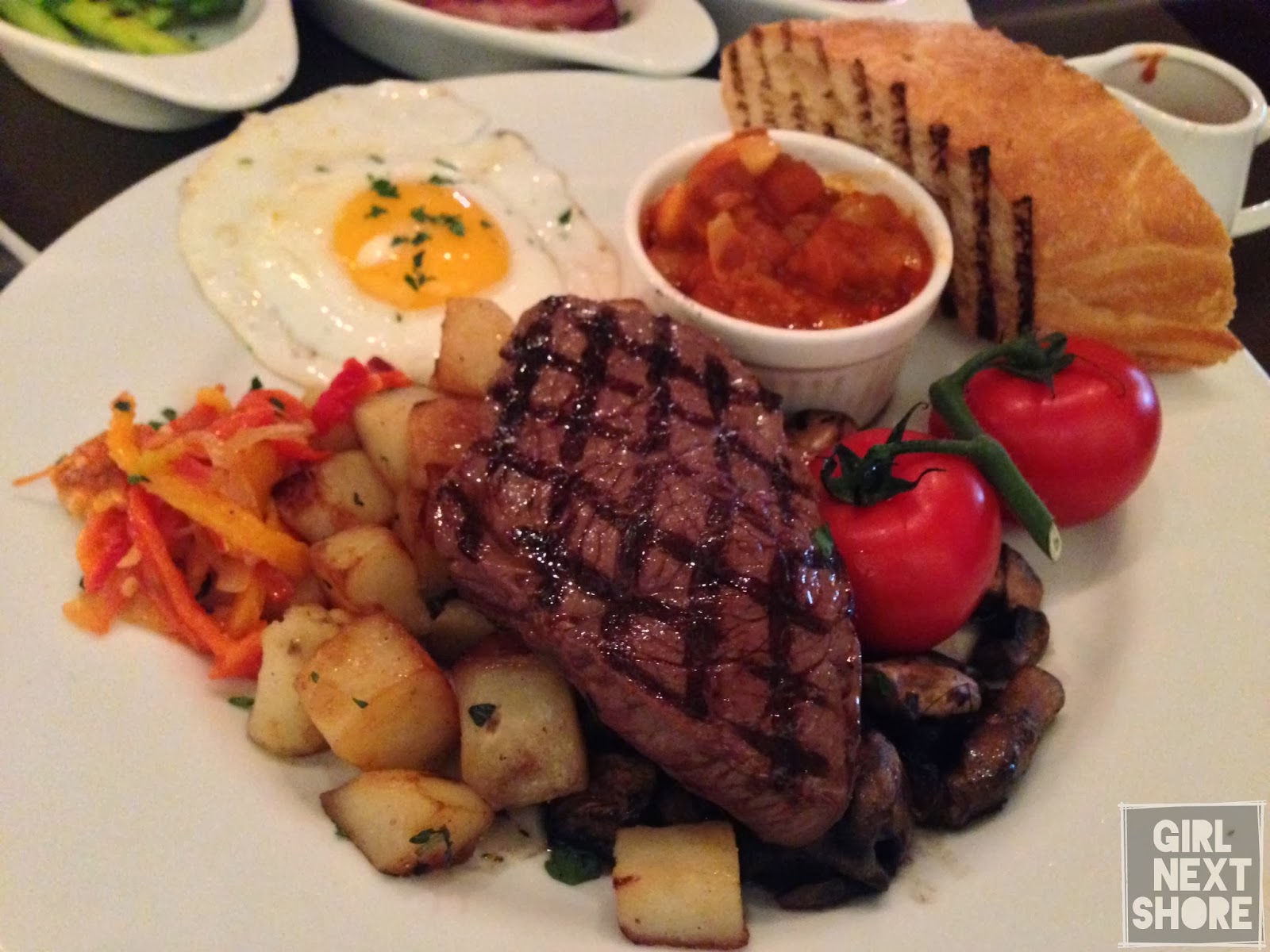