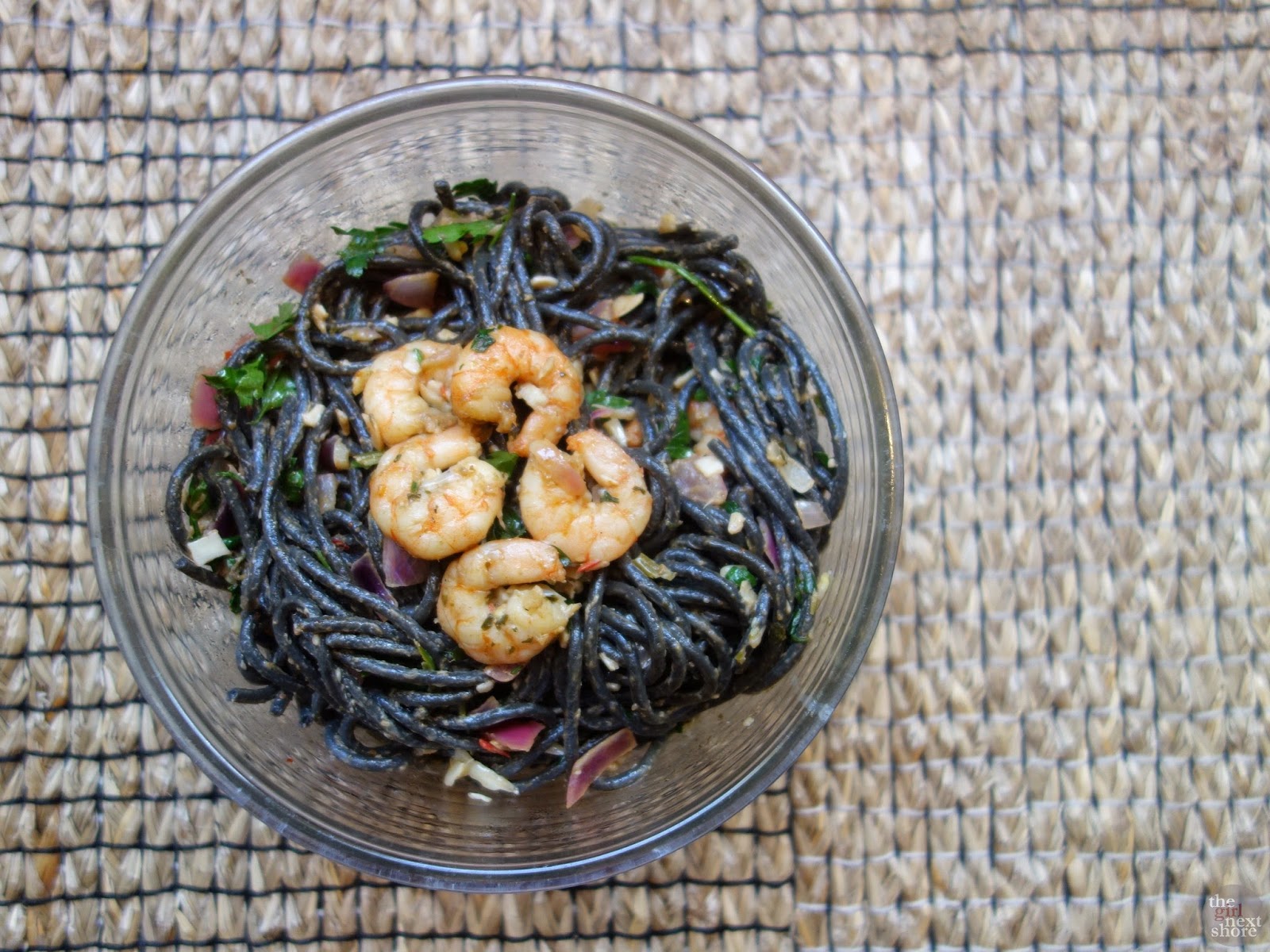 I grew up not knowing how to cook. Women in my family are no chefs; we’ve never bonded in the kitchen in aprons which means we do not have recipes handed down through generations. I’d like to say the men experimented a bit more but really and truly my Kuya J is the only one who ever did (and he can only do tacos – although to be fair his tacos are the best in the world). Cooking was a job beyond my family’s skill-set so we’ve always relied on our house angels for survival.
When I moved to the UK, I survived by living with my cousin’s family in Bournemouth (her dad cooked amazing stuff everyday). I moved to London a year later and my mates sent me off with a care package that included a student cookbook, a chocolate recipe book, and a book on cheesecake. I didn’t really get to use them because the friends I moved in with cooked most of the time. Not that I was completely useless, I think – I’d buy groceries, chop stuff here and there like a sous chef (albeit very slowly) and do the washing up. On random occasions, I’d make “stirred noodles”. Nothing particularly impressive, because I just boil everything and, uh, stir them all together with a bit of oil and seasoning. I didn’t want to touch a pan because I’m scared of oil talsik and burns.
But then I had to live with new, random housemates who cooked separately. I had to fend for myself by eating out and grabbing takeaway. Unfortunately in a city like London, living off fancy dinners, bread and dips and packet crisps is unhealthy for the pocket and the body so one must really learn how to cook.
I finally opened my student cookbook and decided to make the most basic spaghetti bolognese because pasta, apparently, is easy. Unforch, the pasta was overcooked (and stuck to the pan), beef was raw, sauce was too tangy. Needless to say, it was shit and I cried so much that night feeling useless.
But I was undeterred. I tried again (shit). And tried (still shit). And tried again (slightly better). Until I finally got the timings right, the methodology correct, the seasoning perfect. That humble beginning was a massive victory on its own. Since then, I’ve started experimenting with other dishes, other proteins, other flavours (if you follow me on Instagram you’d find me using #girlnextshorecooks every once in a while). I can even cook Filo adobo which never fails to perk me up when I’m missing Manila.
But pasta has always been my go-to dish. It’s quick and easy to make, which is exactly what you want after a long day at work. I prefer using fresh pasta as it cooks quicker and tastes better. Admittedly, I haven’t had the courage to make my own pasta yet (because it involves eggs), but I’ve experimented on heaps of sauces, preferring to make them from scratch instead of getting jarred ones.
A few weeks ago, I’ve been gifted a hamper from Carluccio’s which included a pack of dry squid ink pasta. I was determined to make something fantastic out of it. 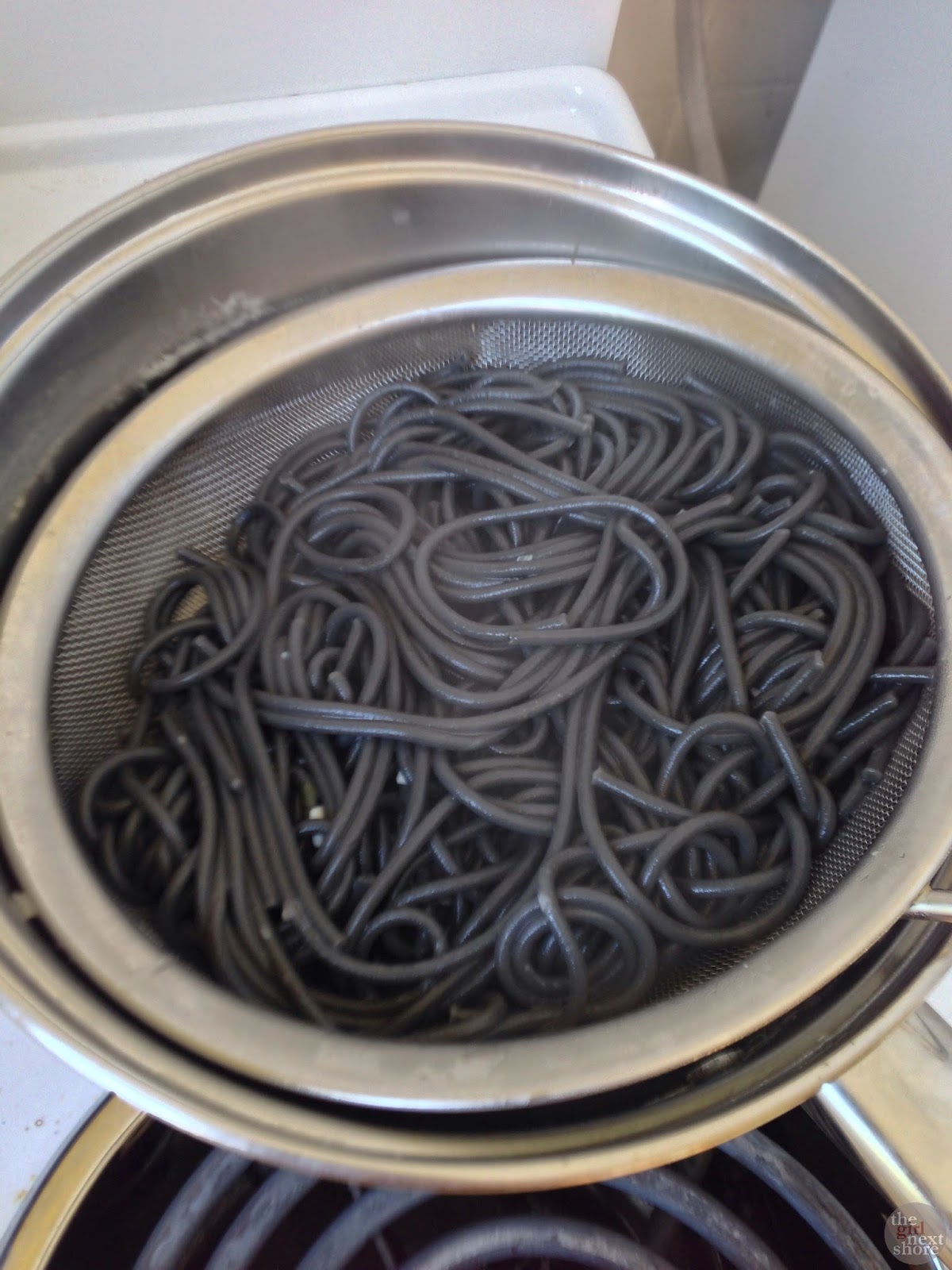 I always cook dry pasta for ten minutes in salted water to get that al dente texture (fresh pasta for two minutes). True enough, the squid ink pasta had enough bite to it. It smelled strongly of cuttlefish ink, but the flavour was quite subtle. When I get over my egg phobia, perhaps I can work on making my own using this recipe.

I wanted a garlicky sauce for the pasta. I used: 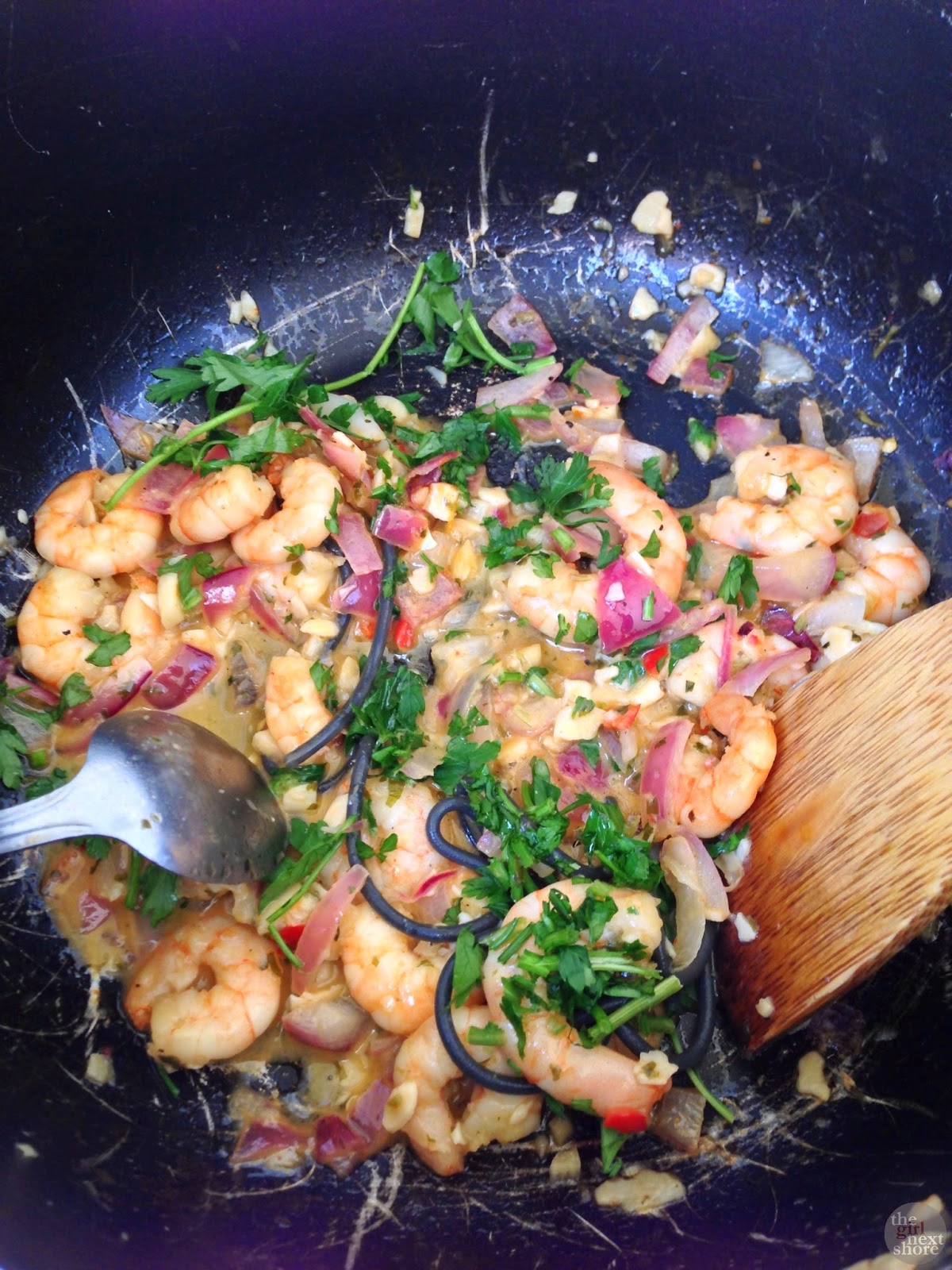 The sauce is easy to make. First, sauté the prawns, garlic, onion and chilli flakes in olive oil. Take the prawns out when they change colour then pour in your wine and seafood stock. Turn the heat up to medium-high and let the sauce reduce in half. When this is done, lower the heat and stir in your butter. When it’s all silky enough, adjust the taste to your liking – squeeze in a bit of lemon juice or go nuts on the pepper. Then pour in your pasta and prawns. 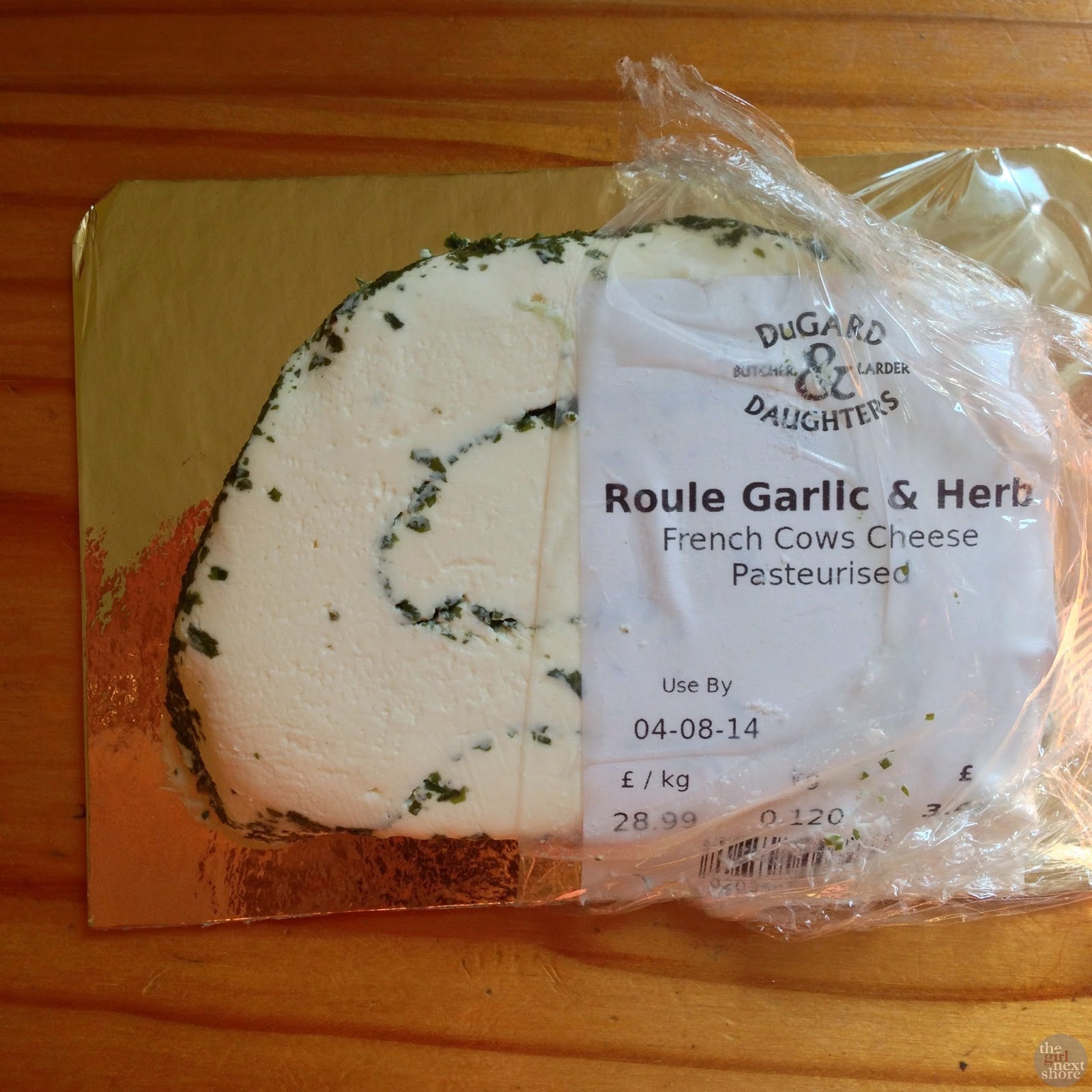 I added some soft cow cheese to make it creamier. This bit is optional, but I tell you it adds a nice texture and flavour to the dish. 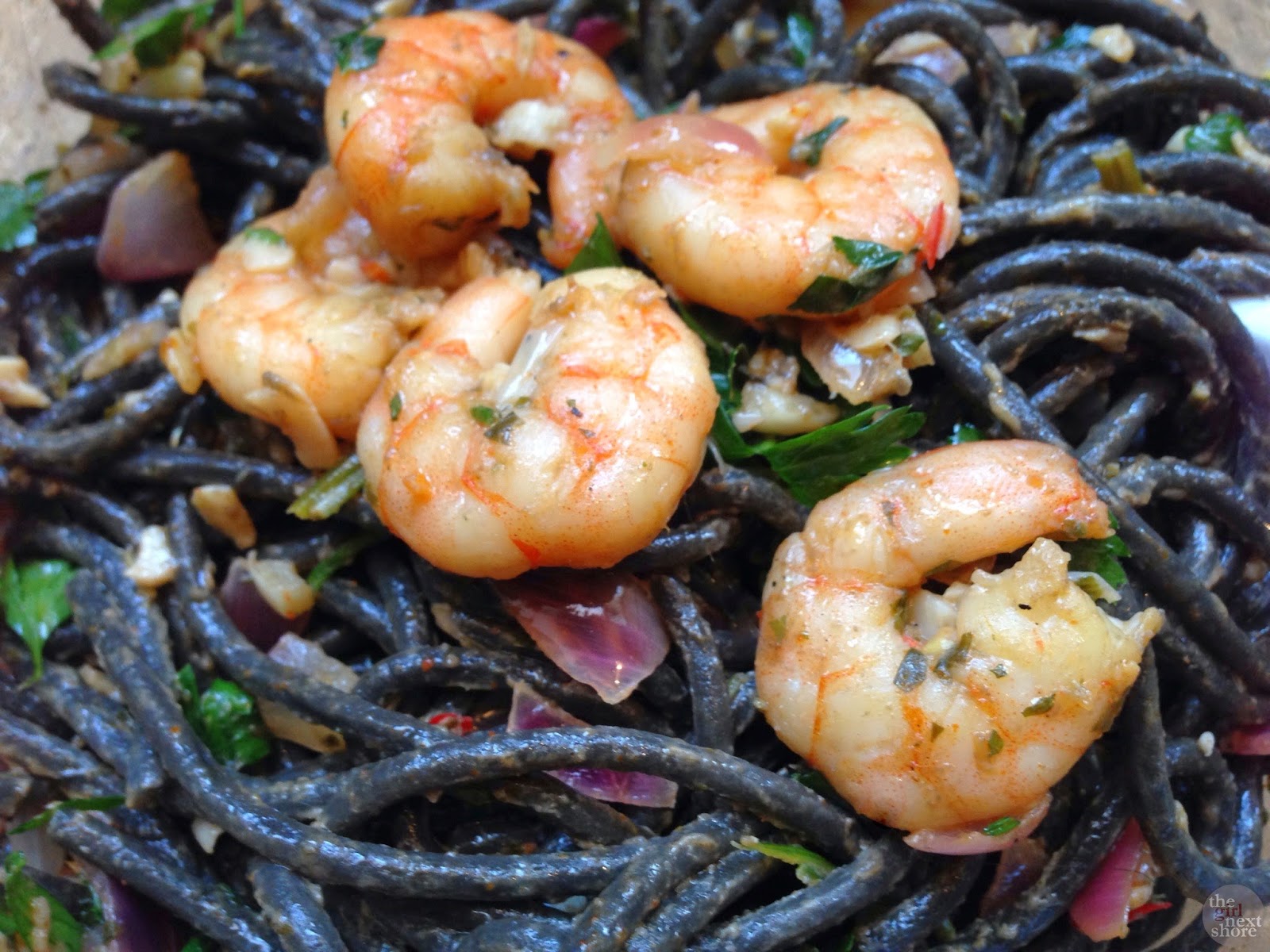 This, by far, is the best pasta I’ve cooked. 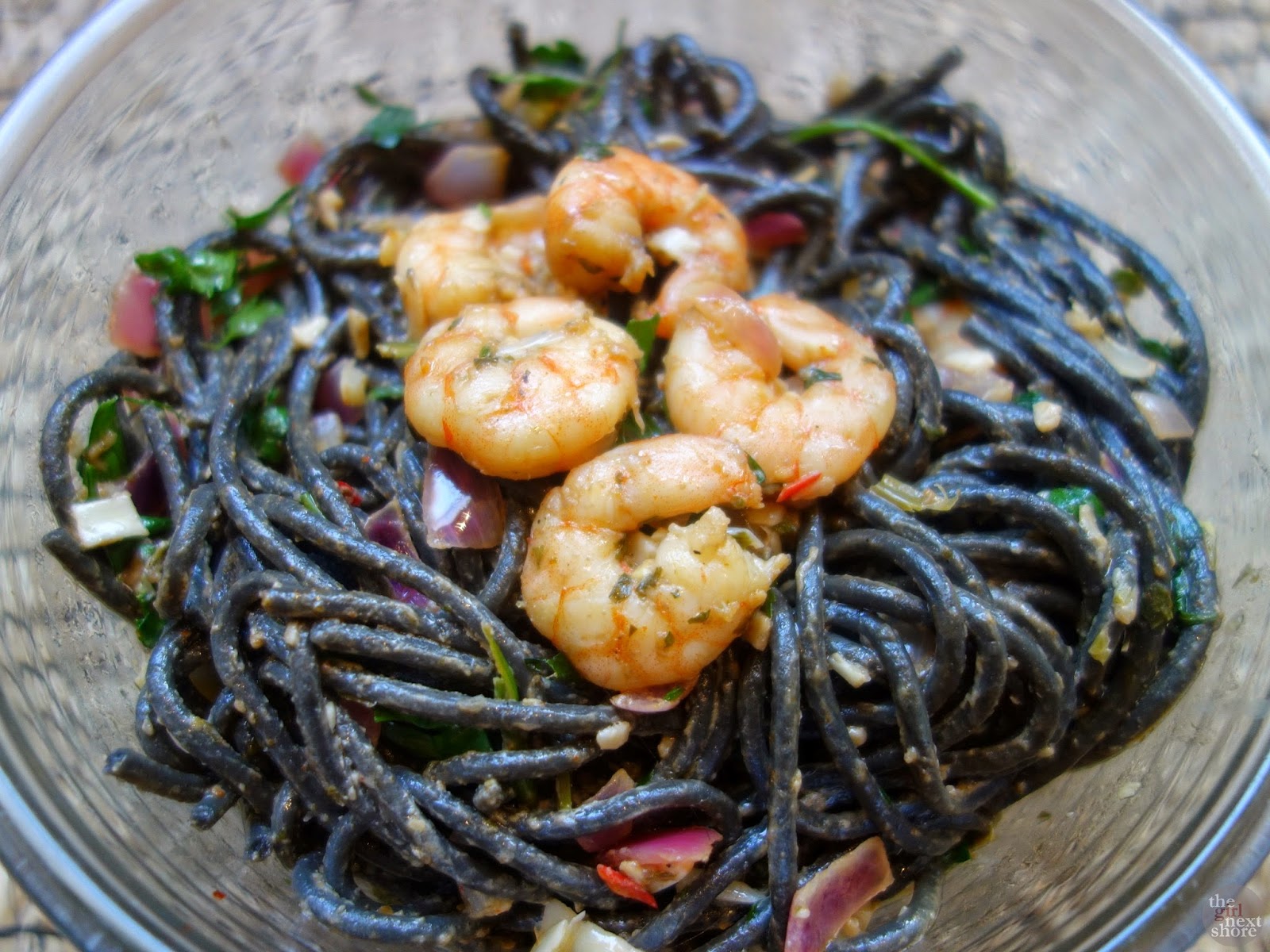 And quite possibly, the best dish I’ve winged. Ever.
I was extremely overjoyed with how it turned out. Every forkful burst with flavour and as I scooped more pasta into my bowl (what carbs?) I realised it was something I was really proud of. Sure, there are plenty more dishes that involve more technical processes but hey, I’m not gearing up for Masterchef. It’s simple but hearty, and was brought about by years of learning.
Now isn’t that something to hand down to the future spawn/s?