Growing up my family and I would visit the UK for three-week holidays to see relatives in Bournemouth. I didn’t know much about the country then so my perception of anything British correlated to what I’ve seen in films and heard in tales. Ya know… posh Eton accents and dapper gents, butlers galore and hats on ladies who look like the queen.
That obviously changed when I moved to the country nine years ago. Goodie Lorde, we’ll never be royaaaaaals. But we can pretend to be on occasion. 😉 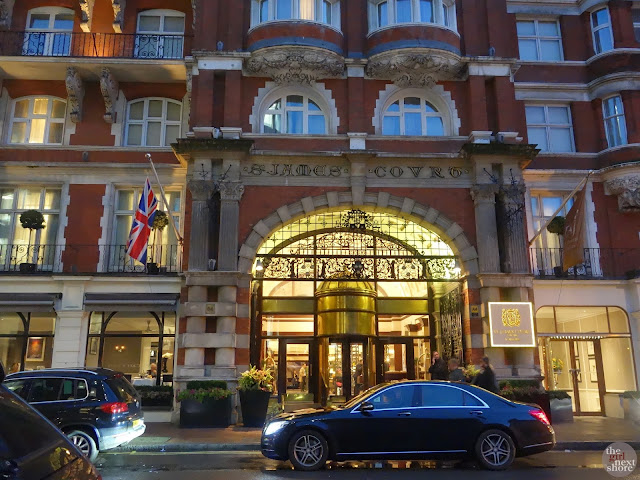 St James’ Court (a Taj Hotel) has long fascinated me for its archetypal British lux. It’s been patronised by elite punters – including guests of royalty – since 1902, after all. Situated near iconic tourist spots such as Buckingham Palace, Houses of Parliament, and Big Ben the hotel has retained its understated charm and its luxurious and posh clientele. 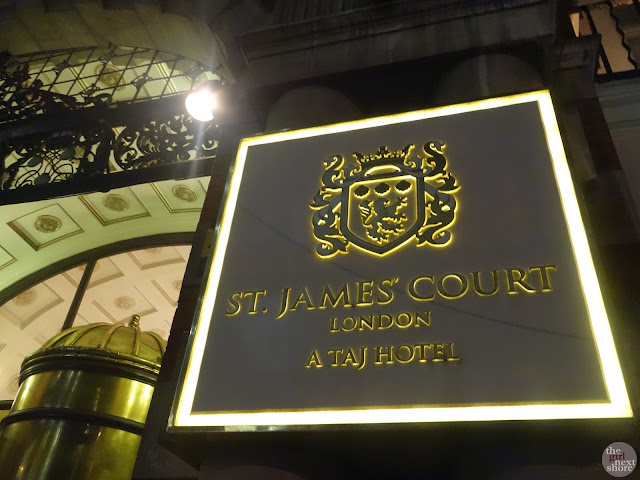 Home to three restaurants (Bistro, Kona, and the Michelin-starred Quilon) and London’s longest bar, the hotel is also a dining hot spot which you shouldn’t miss. 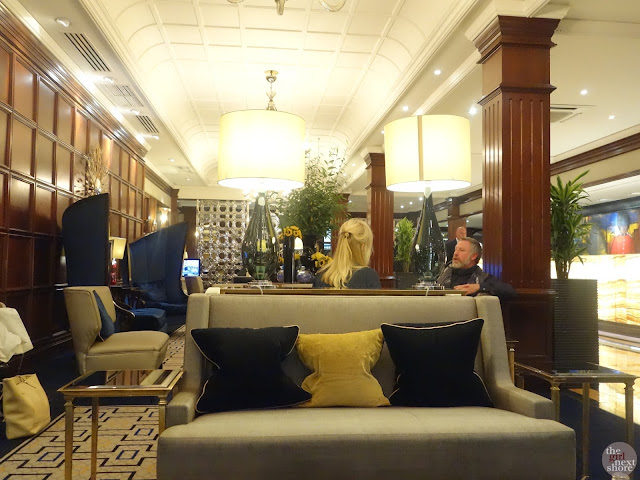 The lovely folks at Zomato invited me to try the Laurent-Perrier Champagne flight at the Cellar Room… and dindin at Bistro. Why not, guys. Why not. 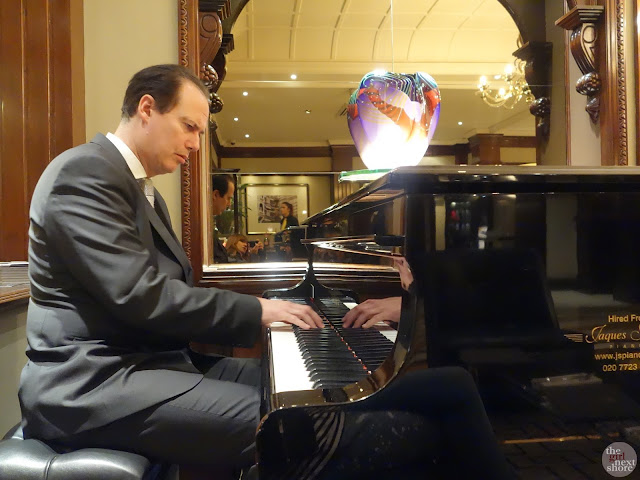 I went with my buddy F who lives close by and adores a good bottle of champagne as much as I do. While waiting for our bubbly experience, we were serenaded by this lovely pianist who was so kind to take on our requests for tunes. 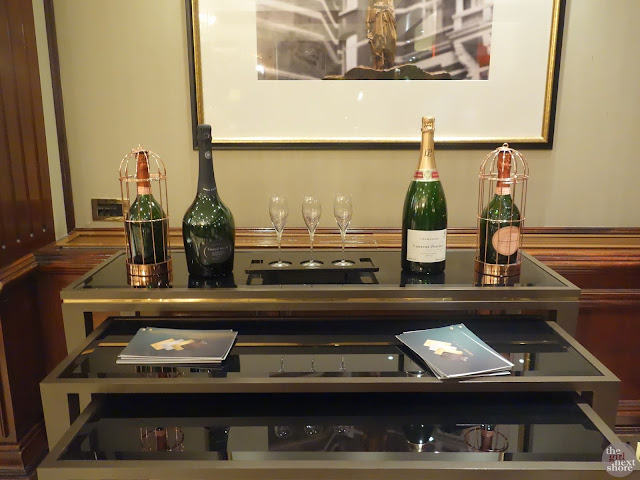 The Champagne Flight at The Cellar Room is an absolute bargain for those who love their bubbles. You get to try three types of Laurent-Perrier champagne (including a vintage) each paired with a canapé for just £20. That’s half a bottle with the munchies per person! 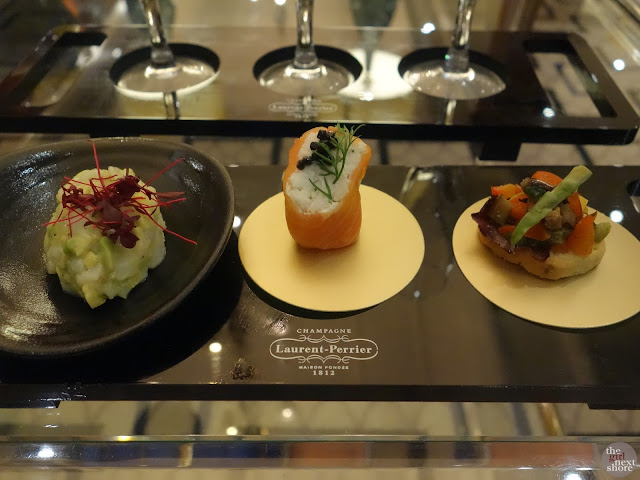 The canapés looked beautiful and has given me ideas for entertaining guests. If only I knew how to cook, eh? 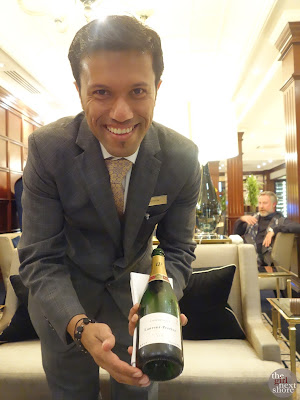 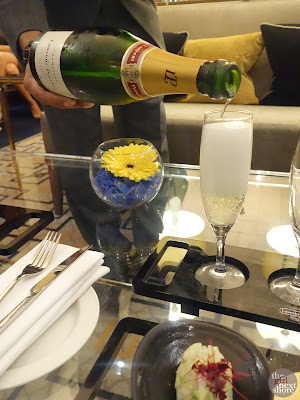 First up, a glass of Laurent-Perrier Brut. I’m not much of a brut fan as I prefer extra dry champagne (I like a teensy bit of sweetness with my bubbles). However, I thoroughly quite liked this as it was fresh and almost citrusy. 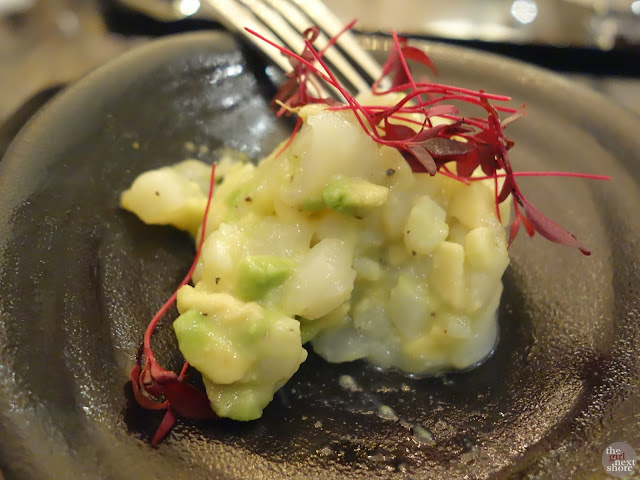 It was served with scallop and avocado tartare which was an ideal pair. It’s the type of brut that would really go well as an aperitif and with fish starters. 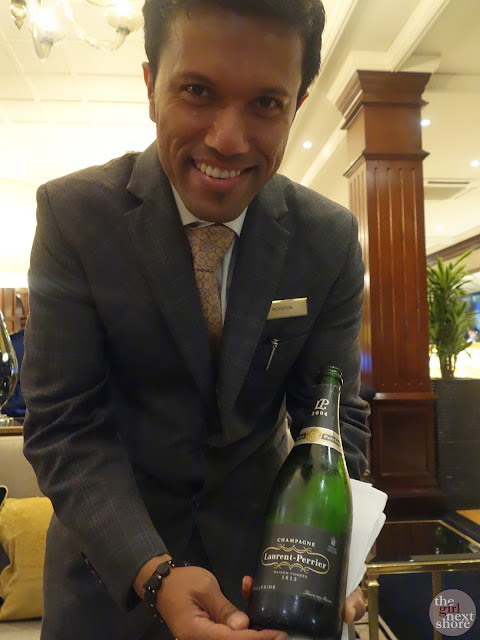 Royston, our super awesome (and photogenic) server, suggested to have the rosé next but I insisted on going for the 2004 LP Brut Millesime. It’s definitely dry, but also more complex and sweeter than the first glass. 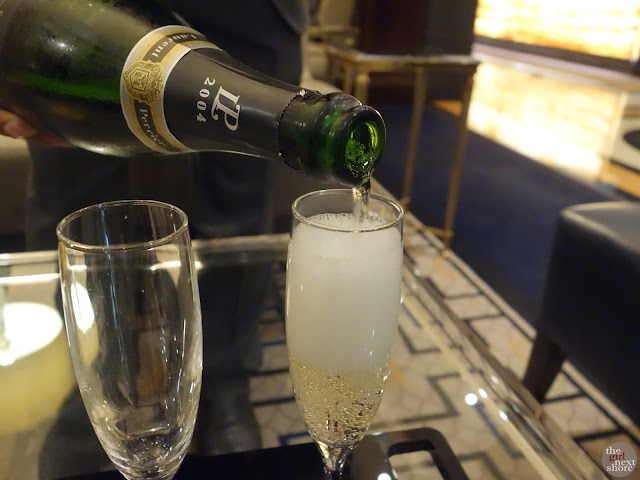 It was paired with a beautiful asparagus ratatouille crostini which I gobbled faster than you can say “bubble” – and I’m kicking myself for not taking a photo of it as it was the best canapé of the three. 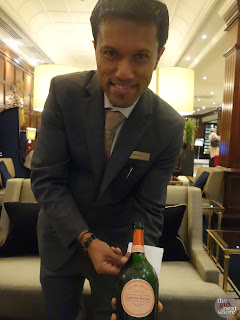 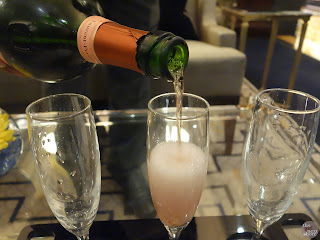 Saving the sweetest of the three for last, LP cuvée rosé. I’ve only started appreciating rosé champagne quite recently but it reminds me of the sea, sunshine and summertime. 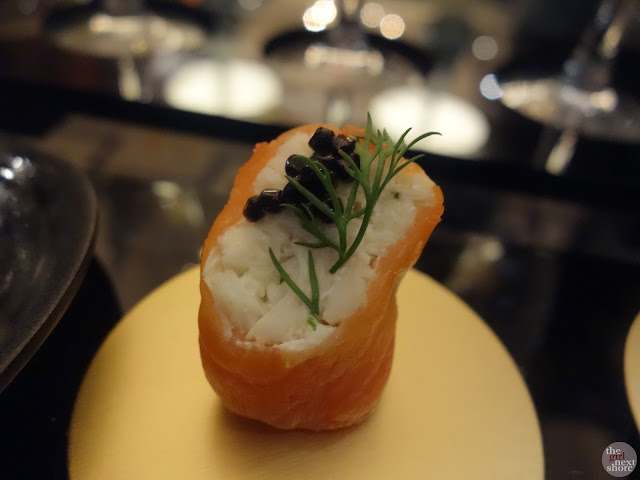 Paired with prawns in tangy marie rose dressing served en paupiette in smoked salmon, I thought this was the best pairing of the flight.

After we finished all three glasses, we were escorted to Bistro for dinner. Bistro is the hotel’s main dining area serving contemporary European dishes with an Asian flair. On the menu that night was a three-course meal with chef’s specials. 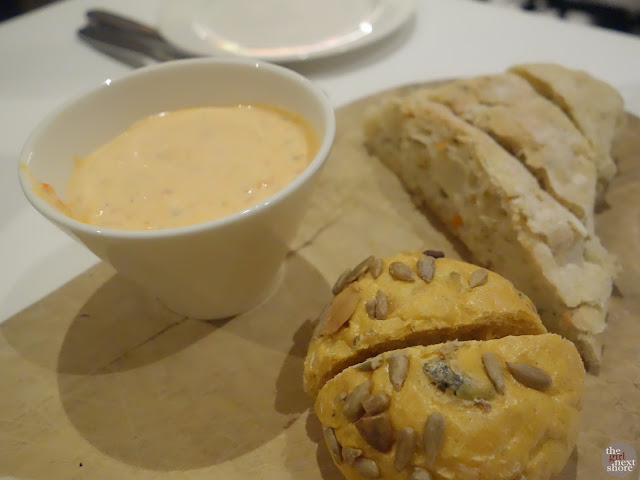 I could’ve easily eaten the whole complimentary bread basket because the red pepper dip complemented each type of bread perfectly. 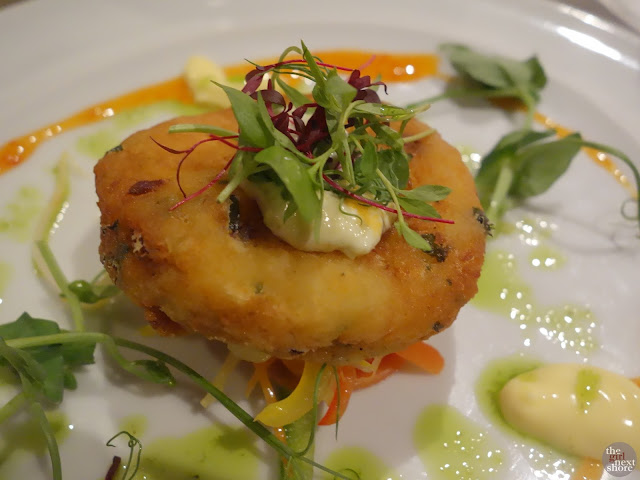 For starters, I opted for the oriental crab cake. Presentation wise, I thought they could’ve shown a bit more restraint as there was a bit too much going on on the plate. Flavour-wise it was quite average. The tartare sauce was good but it was confused by the sweet-chilli sauce which I’m not a fan of. 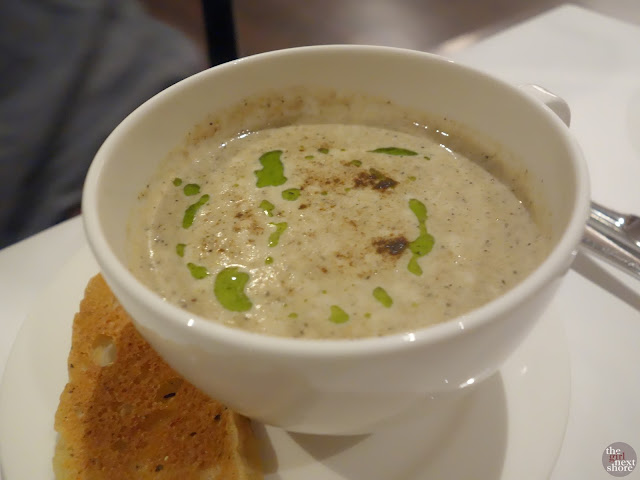 F’s mushroom veloute was the clear winner of starters. Rich, creamy and bold in fantastic earthy flavours, this bowl of soup was so comforting and perfect with the bread they served. 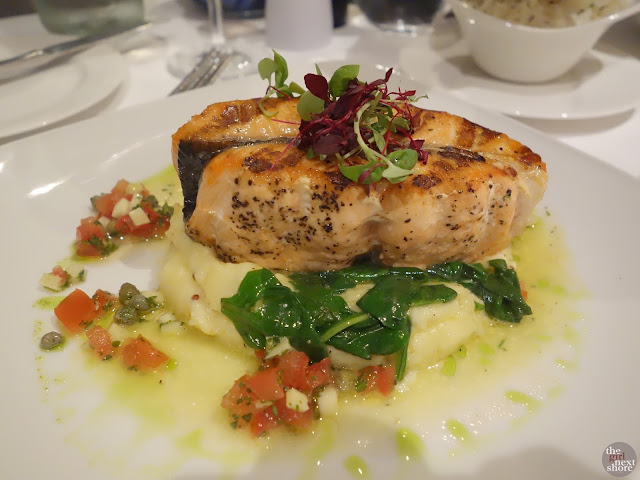 For mains, I ordered the grilled salmon with mustard mash and mango salsa. I was pretty happy with my choice. The salmon was a bit more than expected portion size but man, it’s probably one of the nicest salmon cuts I’ve had in a while.. The mash was creamy and delicious and the salsa didn’t overpower anything. 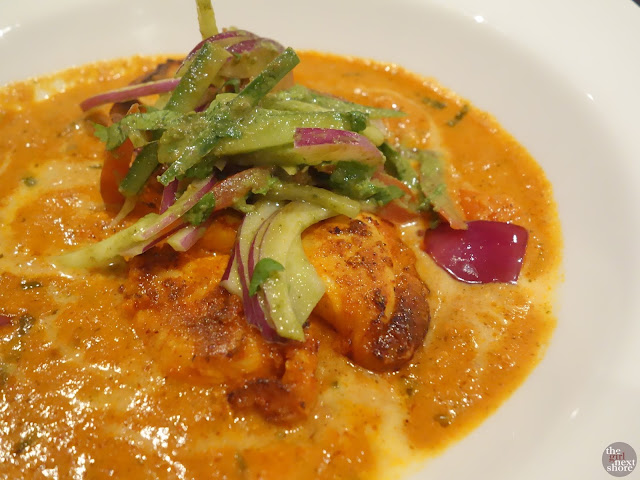 F’s tandoori chicken with tomato cream sauce was interesting. The chicken had a nice tandoori-cooked smoke to it and I thought the sauce was pretty tasty. F didn’t finish the whole thing but I’d’ve happily cleaned the plate – if I weren’t too full from my own. Oh, and how can you make a curry look glamorous and photogenic? 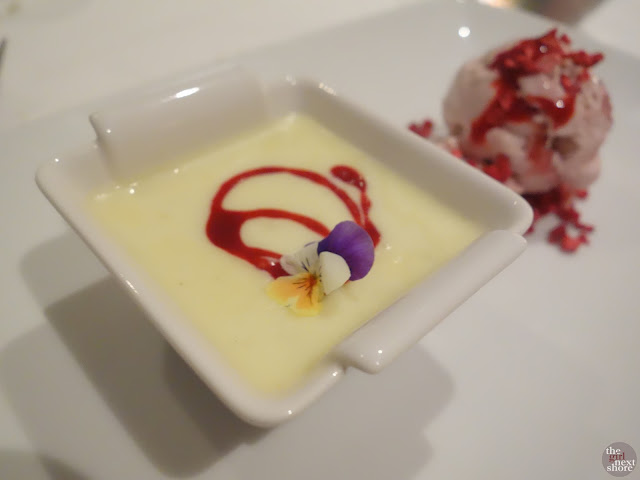 For dessert, I went for the warm vanilla rice pudding served with raspberry swirl ice cream. My pudding was pretty but I wasn’t too keen on the texture which was slightly too watery for my liking. 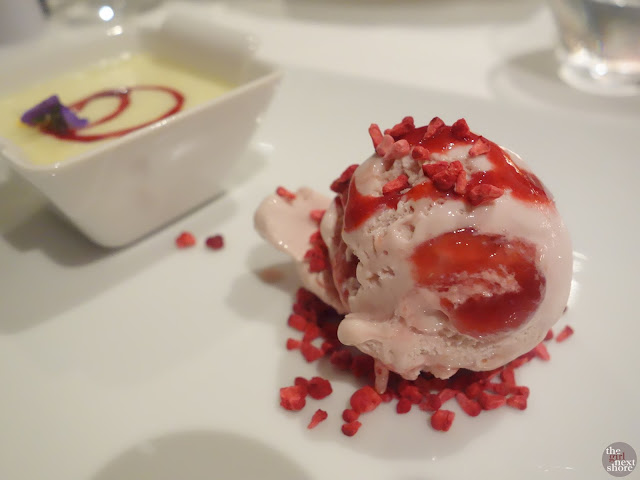 Thankfully, the raspberry ice cream was quite nice and somehow complemented the flavours of the rice pudding. I joked about how it was like a deconstructed and glammed up Muller Corner. #dontjudge 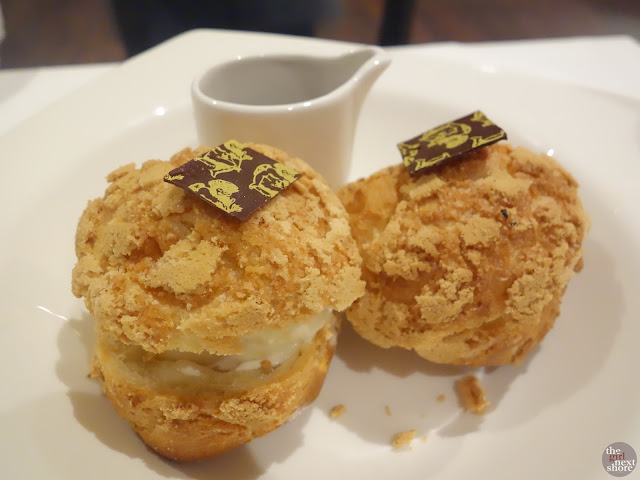 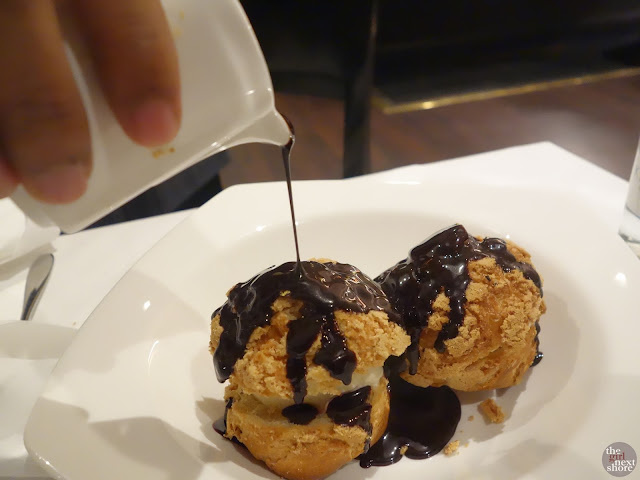 Hello dark chocolat!!! F had a forkful and I devoured the rest. So much for not being a profiterole fan, aye? The choux pastry may not have been perfect but the vanilla bean custard filling and that dark chocolate sauce was pretty delicious. It was delicate in flavour but strong in delivery. Yum!

Paying customers would look into spending £30 for the three-course menu which is such an unbelievable bargain for hotel food, non?

Overall, F & I definitely enjoyed our dining experience at St James Court Hotel. Staff were ever so friendly and helpful and service was just impeccable. Admittedly, I enjoyed the champagne flight more than dinner. Because BUBBLES. ’nuff said. I definitely would come back but perhaps I’d try the other restaurants at the hotel.