I love me a good barbie. Not only does it signify al fresco dining and an excuse for daytime drinking, it’s also such a social thing. Unless the weather is cold and grey and dreary and drizzly. Like London 70% of the year.
I kid. I love you, London.
But seriously whenever Summer fades into a cool Autumnal crisp I get that crazy-eyes type of craving for a good barbie. This year was no different, so when I got an invite from the Bibimbap and Asadal group to try their newest Korean indoor barbecue venture, I graciously accepted. 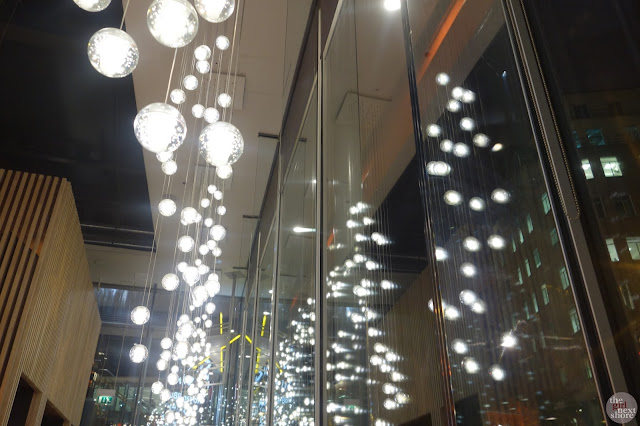 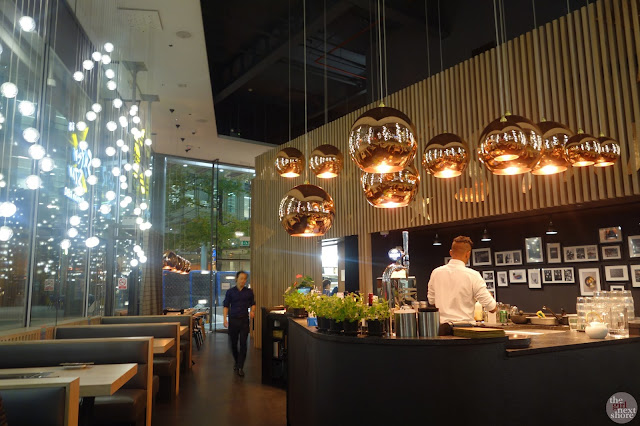 Superstar BBQ is located in Central St Giles, next to Ippudo and across Kanada-Ya. Despite the K-Pop referential logo and branding the decor is rather sophisticated, with light bulbs and rose-coloured lamps cascading from the ceiling and an island bar at the centre. Glass walls mimic an airy space and tables are big enough to indicate a huge welcome for group dining. 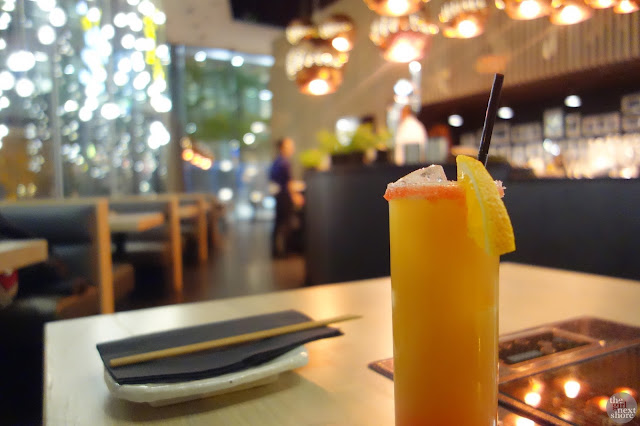 Of course, we started our meal with cocktails. I found the drinks lacking that “Whoooohooooo!” type of kick and rather too sweet but this wasn’t an issue. There are decent cocktail bars around the area (ie LAB and London Cocktail Club) to satisfy the thirst anyway.

We had a choice to pick one of the three set menus so we opted for Set 3 (£35) plus a side of Korean fried chicken. 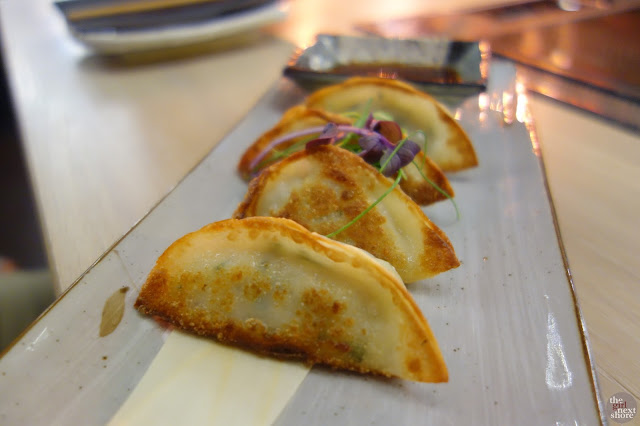 The mandoo (Korean dumplings) came first and these were rather good. The wrap is thin and crispy and the filling was nicely seasoned. 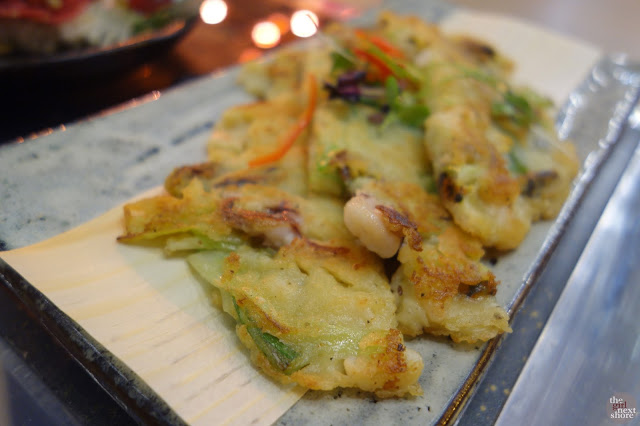 The pa jeon (Seafood pancake) was a generous portion. Though there was an abundance of seafood in the pancake, I thought the batter was a little tad on the oily side. 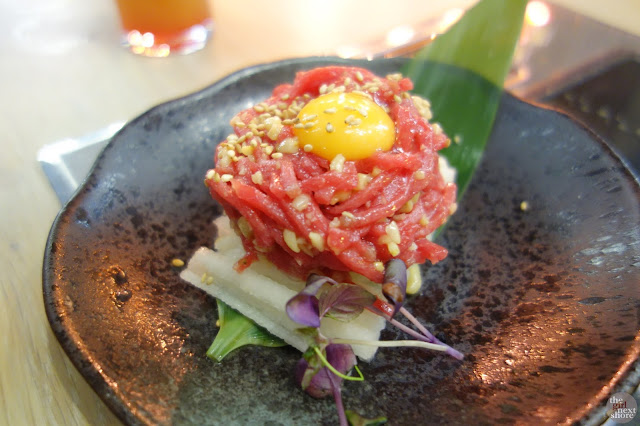 The yuk hwae (beef tartare) was very pretty and a sure shot Instagram winner. I had a bit of it without the egg and it was decent enough, but I’ve had better. 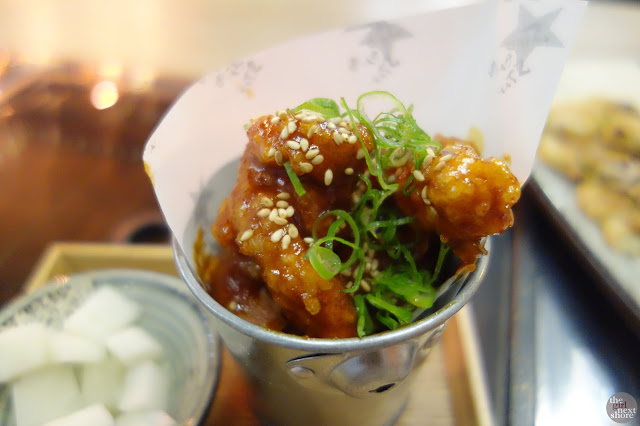 We asked for Korean fried chicken in sweet chilli sauce and it was very tasty. So tasty that I reckon I could finish an entire serving of 10 pieces by myself. 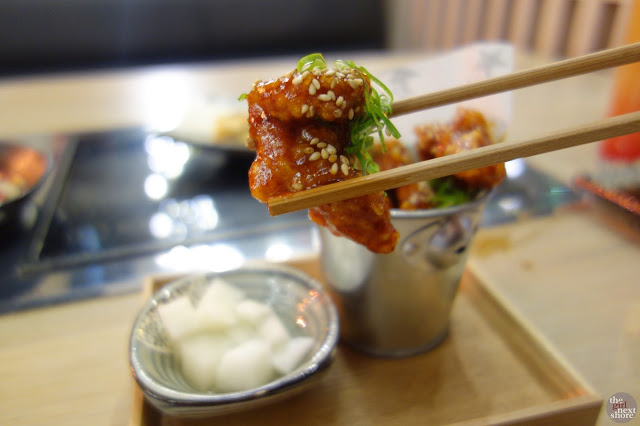 The coating was crispy and the chicken was juicy. I wish it had a bit more of a chilli kick to it, though.

Once finished with starters, a server asked if we were ready for the barbecue. With a resounding yes, we set him off to get to the main event of the night. This was were it got a bit tricky. About 20 minutes later, we were still waiting for our food. We had to ask two other servers to follow up before the dishes finally arrived. 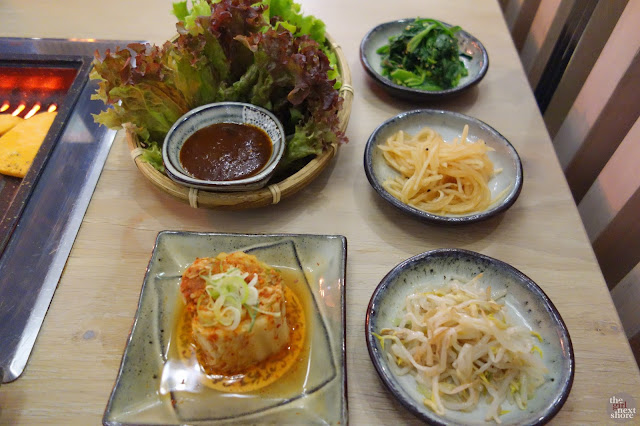 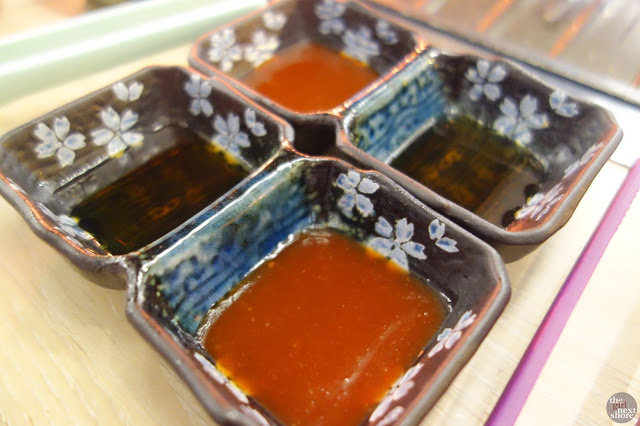 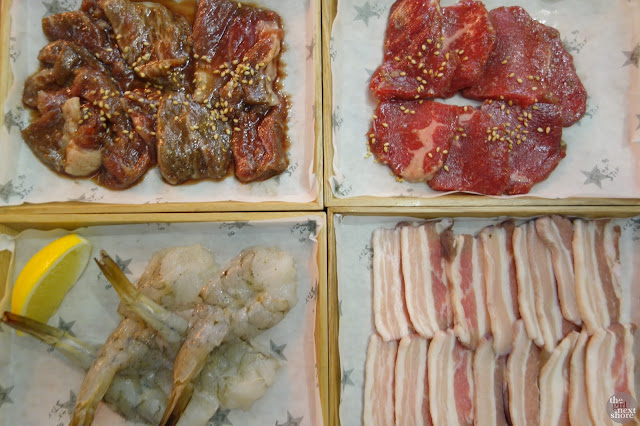 Assorted vegetables, sauces and meat finally arrived while another server helped set up the grill on the table. The veggies could’ve been handled with a little bit more care I thought, as they came a wee bit limp, but the kimchi was okay. 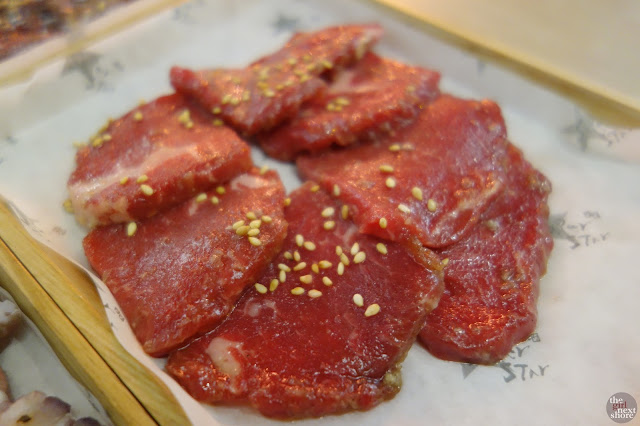 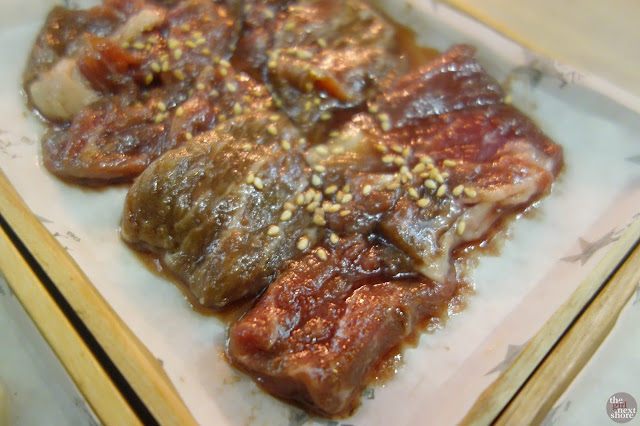 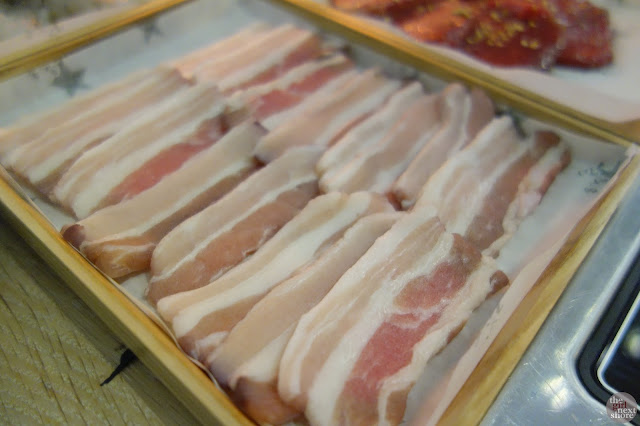 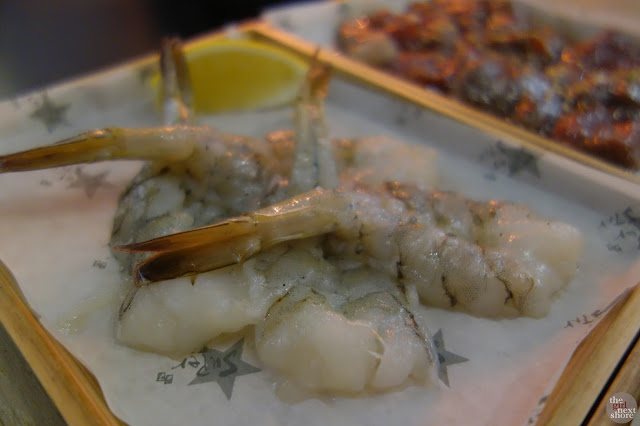 Frankly, we were rather underwhelmed by the protein. The prawn and wine pork belly were a little on the bland side whilst the sesame and garlic sirloin was a bit underseasoned in my opinion. The galbi rib, thankfully, had a nice flavour and was quite succulent. 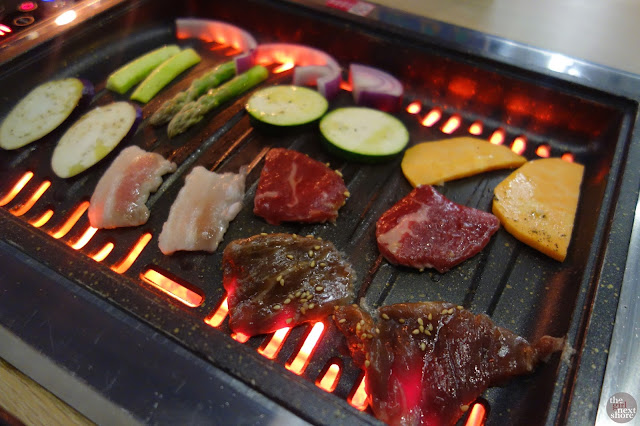 Using the table grill was rather interactive and it made us feel like pro chefs for a while.
After we finished our mains, there was another bit of a wait before we had a look at the dessert menu (after calling the attention of two different servers, too!) 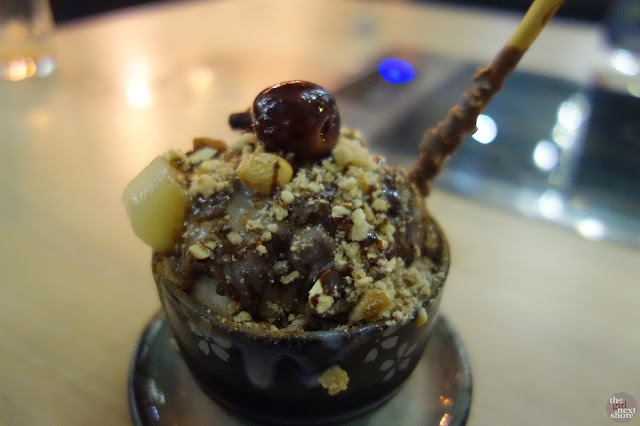 This, my friends, is “The Snowball”. Essentially shaved ice topped with a mixture of fruit, chocolate, nuts, beans, and syrup. It reminded me of a Philippine dessert called halo-halo (similar to the Malaysian ice kacang) which I love. Unfortunately, this dessert snowballed downhill for me. 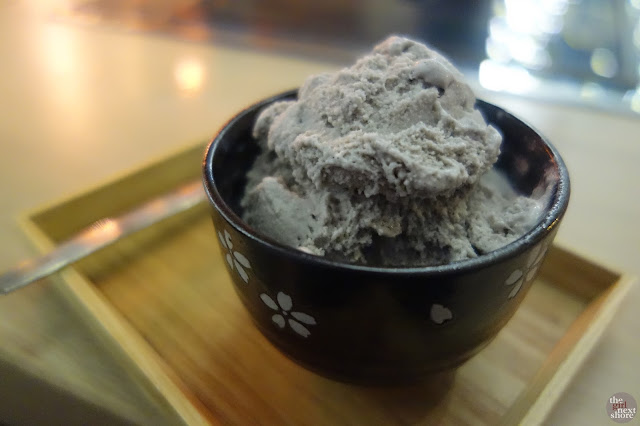 The highlight of the night, however, came last. My bowl of black sesame ice cream was the best I’ve had in ages. It reminded me of ube/purple yam ice cream which is one of my top three favourite ice cream flavours of all time.

After we left the restaurant we realised we didn’t get our miso soup which came with the set menu. Not that it mattered then anyway. We had plenty enough to eat. #amomentonthelips

I can’t say I’ve had a similar experience at Superstar BBQ like my other blogger buddies who totally raved about it. Perhaps the place had an off night when I went? My issue is down to the essence of hospitality: product and service. Food was okay but could do with a bit of tweaking here and there; service was a bit lacklustre and some waiters didn’t show knowledge of the menu (although admittedly there was one server who stood out in terms of enthusiasm).

I do see the marketability of this place especially with its strategic location and concept of an interactive dining experience, so I hope they sort some of their teething issues because I don’t know anyone who doesn’t love a damn good barbecue.