I have to be honest. Indian food doesn’t appeal much to me. Dishoom was okay but I don’t particularly understand the hype and why people queue so long to eat. So when I got invited to try Lotus, a “fine dining Indian restaurant” in Covent Garden/Trafalgar Square I wasn’t in a rush to go over and feast.You’d pass Lotus en route to the National Gallery, the National Portrait Gallery, or Leicester Square. However, I doubt you’d give it much notice as it’s sandwiched between random shops and if you are looking for some fine dining restaurants, I doubt you’d particularly go to that area, non? 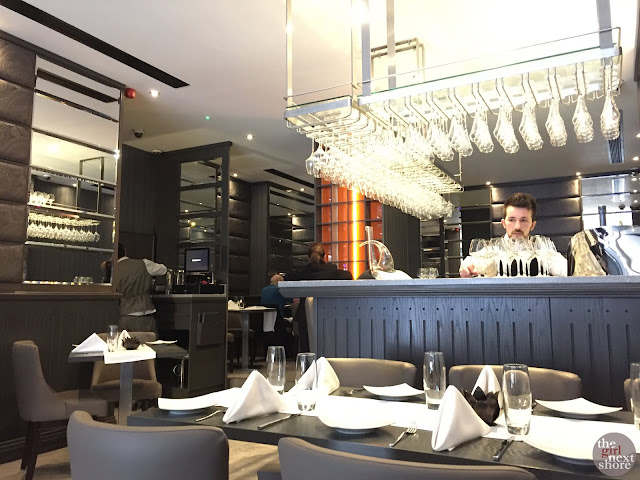 Our party of four (three of which aren’t fans of the cuisine) went on a Sunday for lunch and considering it was a relatively touristy area, the place only started filling up at around 1.30pm. The place actually looked contemporary with faux leather upholstered walls in shades of grey. Plus the toilets were automatic fantastic. 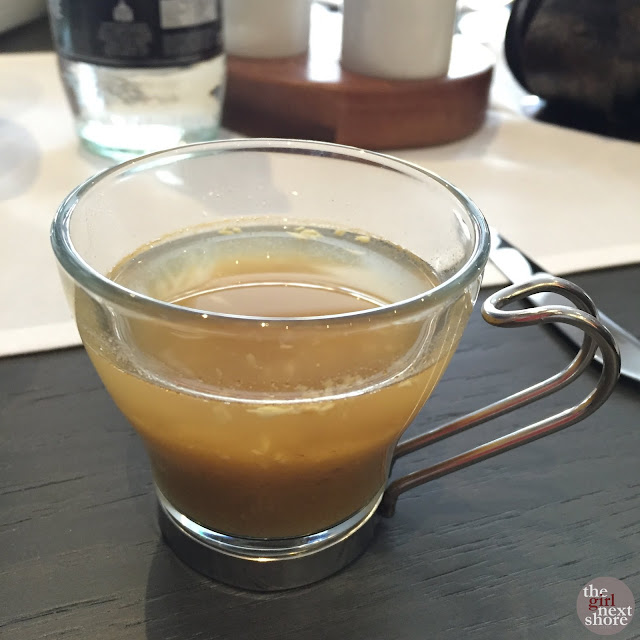 We started with an amuse bouche of mulligatawny made with lentils, coconut milk, and water. The name translates to “pepper water” and that’s exactly how it tasted. I didn’t like it much. 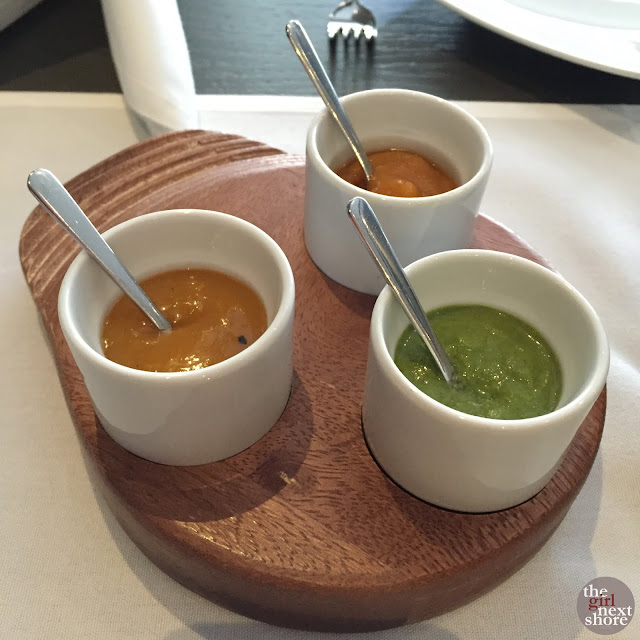 We were also given some chutney (red pepper, coriander, mango) to dip some papadums in. At this point, I wasn’t too moved.
It took us a while to decide what we wanted because they gave us not one, not two, but three menus! One had for the standard a la carte menu, another for the lunch menu (three courses plus a glass of wine for £20), and a classic 5-course taster at £60 (or £110 for wine pairing). This was rather confusing and I wish they just kept everything in one big menu. Eventually, half of us opted for the lunch menu and half of us went a la carte. 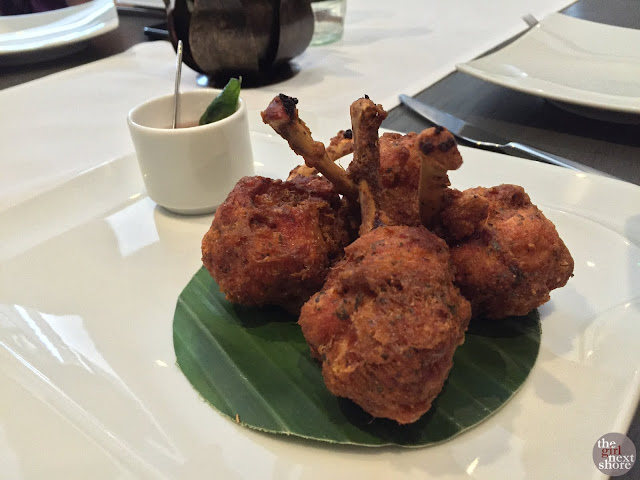 S and I went for the fried chicken wing tulips (£6.95) and at first bite, I knew the meal had finally kicked-off. The chicken was lip-smackingly succulent and the coating was crispy-crunchy perfect. Spice well-balanced and seasoning on point, this was a starter with a bang. 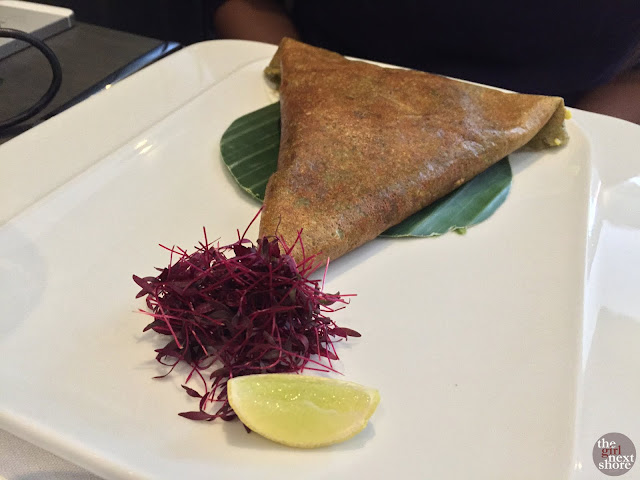 D opted for the masala prawn, duck eggs and lentil wrap (£8.75). She thought it was delicious but it became a bit too eggy for her liking. 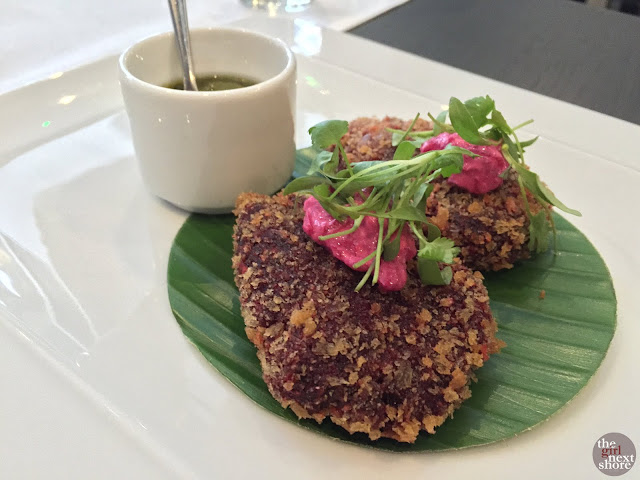 F’s beetroot and sweet potato chop (£6.75) was my favourite of the starters. A rather inventive way to serve beetroot, this one had taste and texture down to a t! The chop itself had a nice balance of sweet and tang and I loved how it had a full flavour eruption on my palate. Bravo indeed.
Servings were rather generous and at this point, we were pretty comfy.
But obvs ready for more. 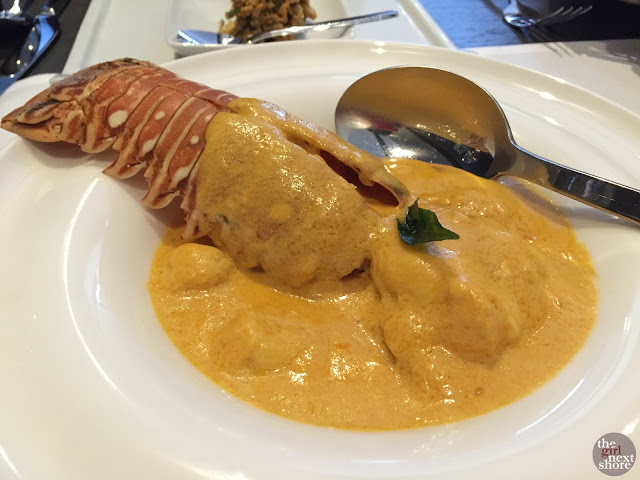 For mains, I didn’t really want anything covered in much sauce but as I was ordering under pressure (and indecision) I ended up getting the lobster tail and queenie (£23.75) with ginger, coconut, and curry leaf curry. Holy hallelujah the sauce was fantastic! Creamy and delicately spiced, this was perfect with the lobster and the scallops which were cooked to perfection. We all agreed that the sauce was a winner. 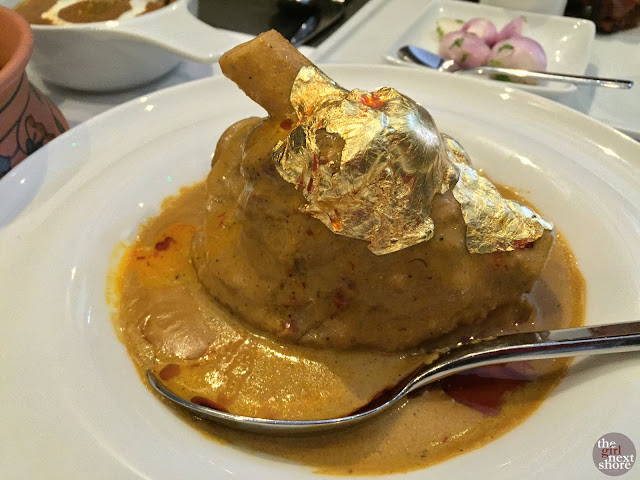 F’s lamb shank khorma (£21.75) came topped with 23 karat gold leaf and it was just too pretty. The lamb was really tender and the sauce had good depth. It was creamy, earthy and complemented the meat well. 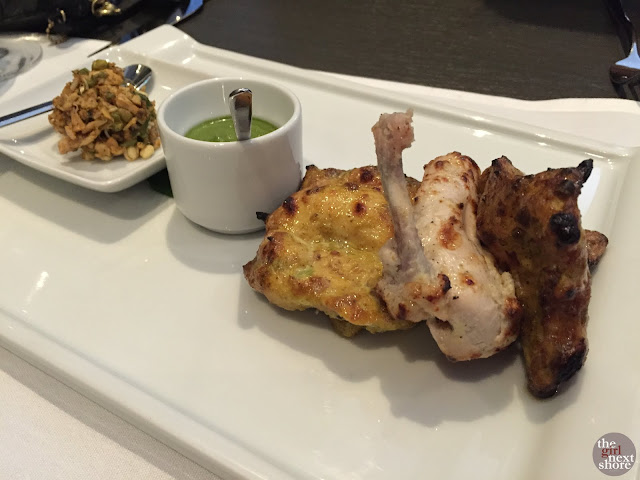 D had the chicken tikka and poussin as part of her lunch deal. The grilled chicken came out moist and the seasoning was balanced. It came with chicken chaat, raw mango and sprouted lentil kachumber, and basil yogurt chutney. 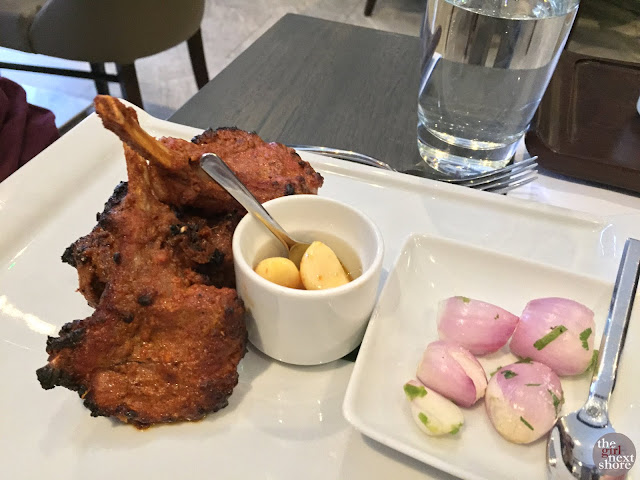 S’s main was a plate of lamb chops and rump served with pickled garlic and onions. I’ve never had grilled lamb like this. It was tender juicy and the spice ignited a lot of raving in my mouth.
Now, no Indian meal would come without the usual sundries. By the time all of the accompaniments arrived our table was looking like a glutton’s paradise. F and I ordered a la carte so we had to order the bread basket (£3.75) which consisted of a naan, an herbed roti and a spiced chapati. All of which we consumed with much gusto as we scooped the sauces of our mains. 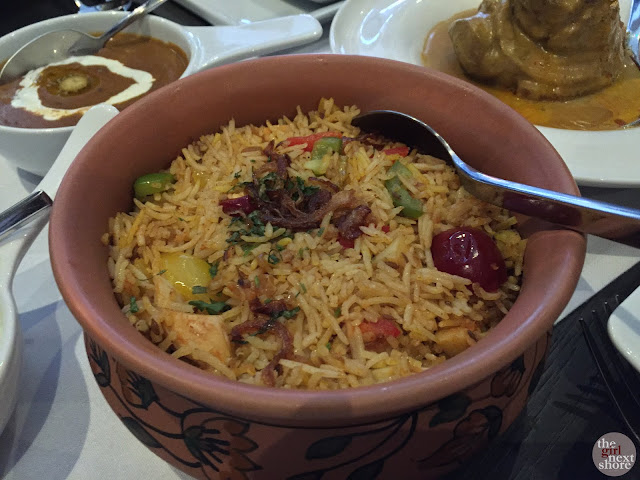 Our lovely server also suggested we go for the jackfruit and pepper pulao (£7.75) because everyone needs extra carbs, non? Jackfruit is one of the few fruits I actually enjoy eating with savoury stuff so it wasn’t a surprise that I loved this dish. For a non-rice eater, I totally inhaled this dish which you can actually have as a vegetarian main because there’s so much stuff in it. 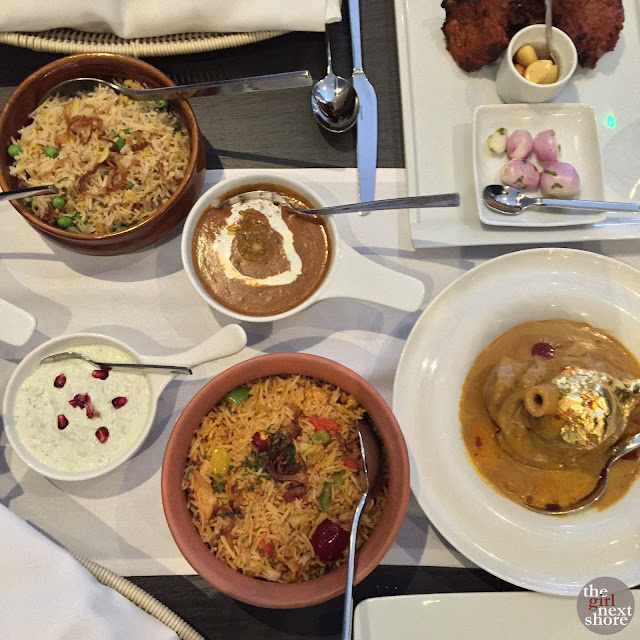 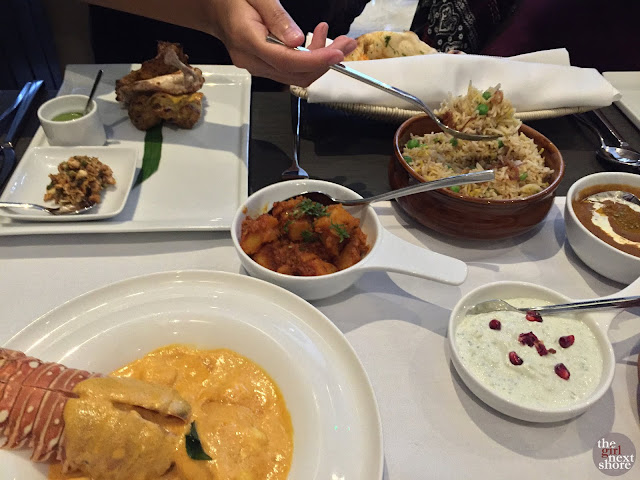 D’s and S’s lunch deals came with a bread basket, saffron and green peas rice, raita, and the most delicious daal I’ve had. Can’t blame them for skipping dessert – for £20 this was seriously a bargain of a meal. 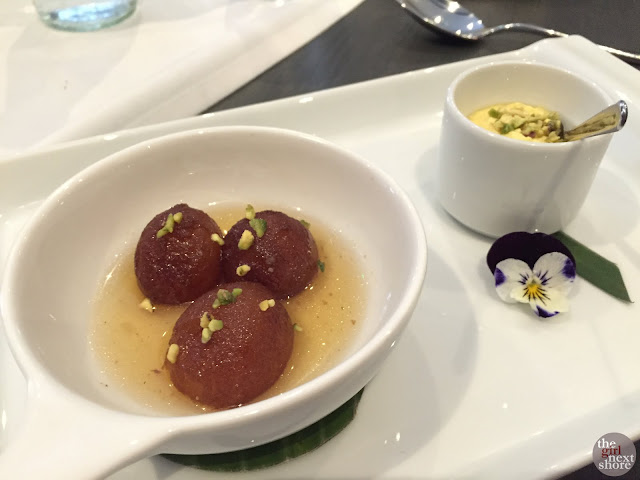 We were all stuffed at this point but in dire need of something sweet. The gulab jamun (£6.75) was light, syrupy and yet another play on texture. It came in a delicately sized portion so was just the perfect afters for the fantastic meal we had. 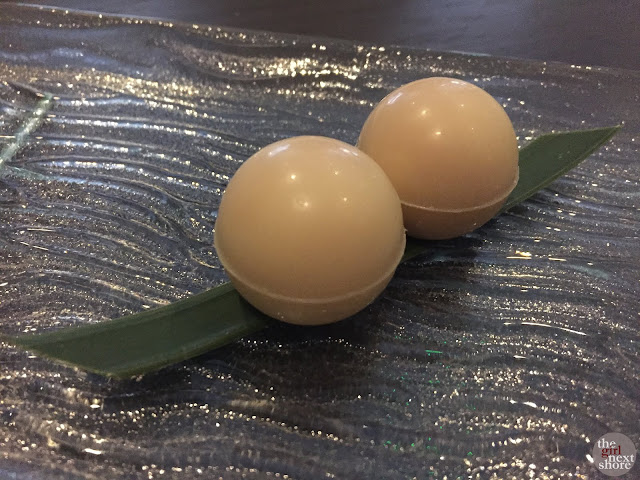 We were also given some petit fours with our coffees and teas: white chocolate truffles with some sort of Indian spiced marzipan. We weren’t too keen on this, but it was a nice touch.
It was such an amazing meal and possibly the most pleasantly surprising one of the year. I am kicking myself for not being overly enthusiastic about it enough to not bring my actual camera (#bloggerproblems) to photograph the wonderful food we had. Service was also very much applauded – it’s the type of service you’d get Michelin stars for.
Seriously Lotus, wow. You have converted us into Indian food fans (although if I were to eat Indian again, I’d probably come back here). 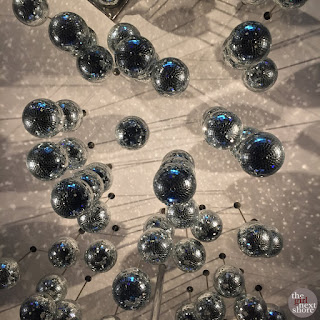 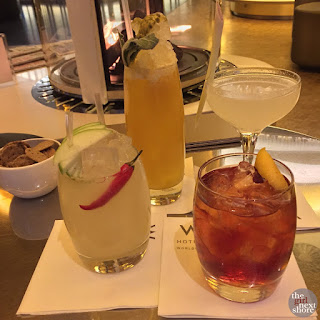 After our meal we decided to walk off the excessive eating schmeeting but as it was rather cold, we ended up at the nearby W Hotel and cosied up near a very energetic DJ with some very potent cocktails. Perfect Sunday.
Lotus
17 Charing Cross, London WC2H
My meal was complimentary but average spend pp is around £45