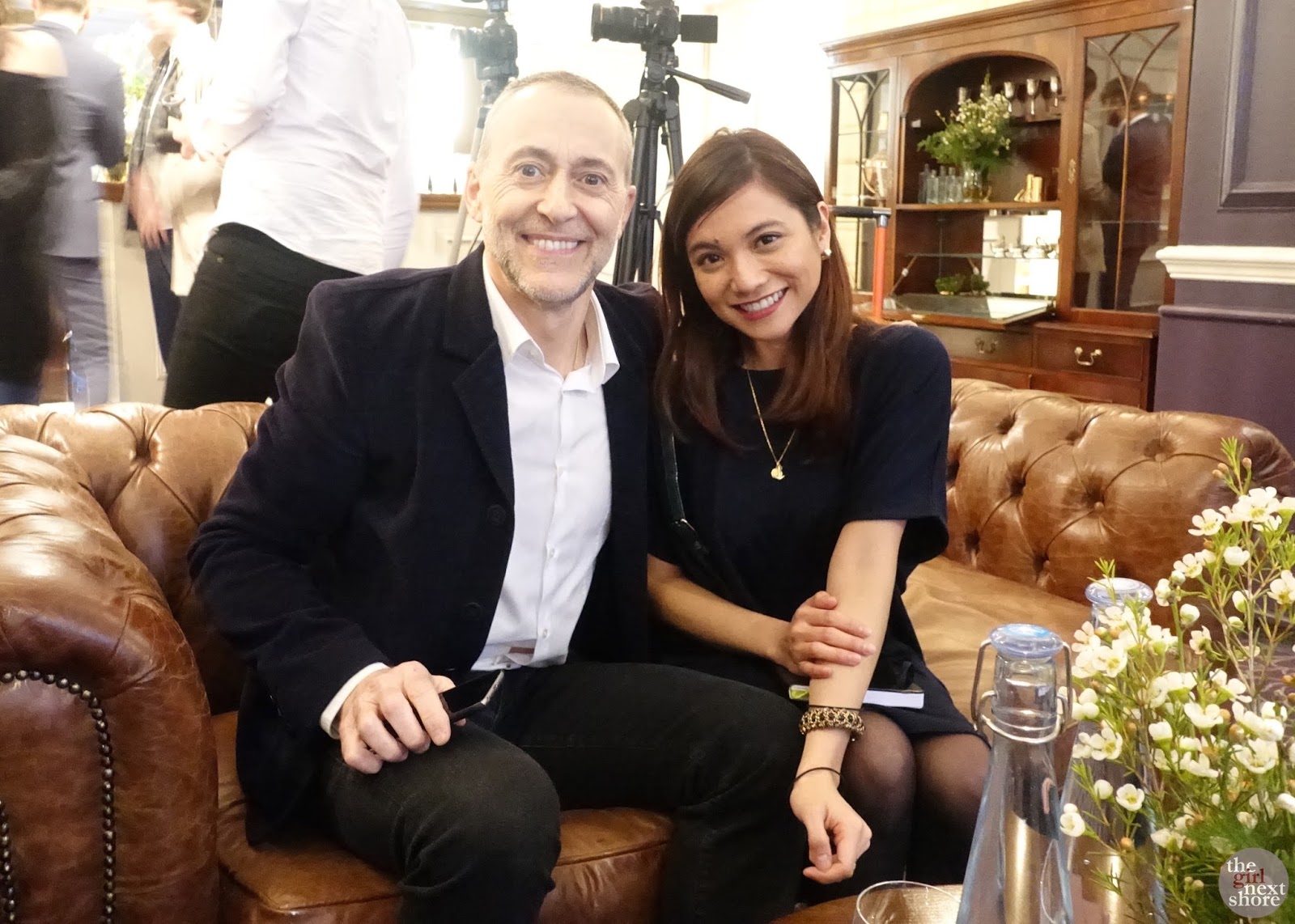 I have great respect for Roux brothers Albert and Michel Snr as they’ve certainly given Britain a great legacy of amazing chefs under their training. Albert’s son Michel Roux Jr is someone I admire not only for his culinary achievements but also for his contribution to society.
So when I received an invitation to spend time with him at the launch of The Balvenie’s “Craftsmen’s Dinner” film series, I immediately signed my holiday forms and took the arvo off.
I mean, whisky and MRJ?! It’s a foodie dream come true and I wouldn’t have missed it for the world.
The Craftsmen’s Dinner is a film series produced by The Balvenie featuring six gifted artisans with the aim of showcasing their talents and exploring the true meaning of craftsmanship. It’s very true to The Balvenie’s brand of mastering crafts, as it’s also the only single malt still handcrafted the traditional way.In the series, Michel meets and trades skills & secrets with the craftsmen and eventually cooks a dinner for these talented people, using elements of their crafts for a seriously enviable experience. 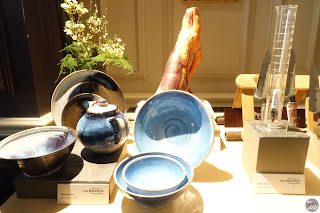 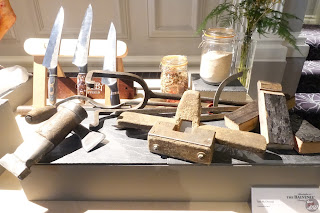 What an absolute honour it was to be there, in celebration of skills – and people – that often do not get the recognition they deserve. 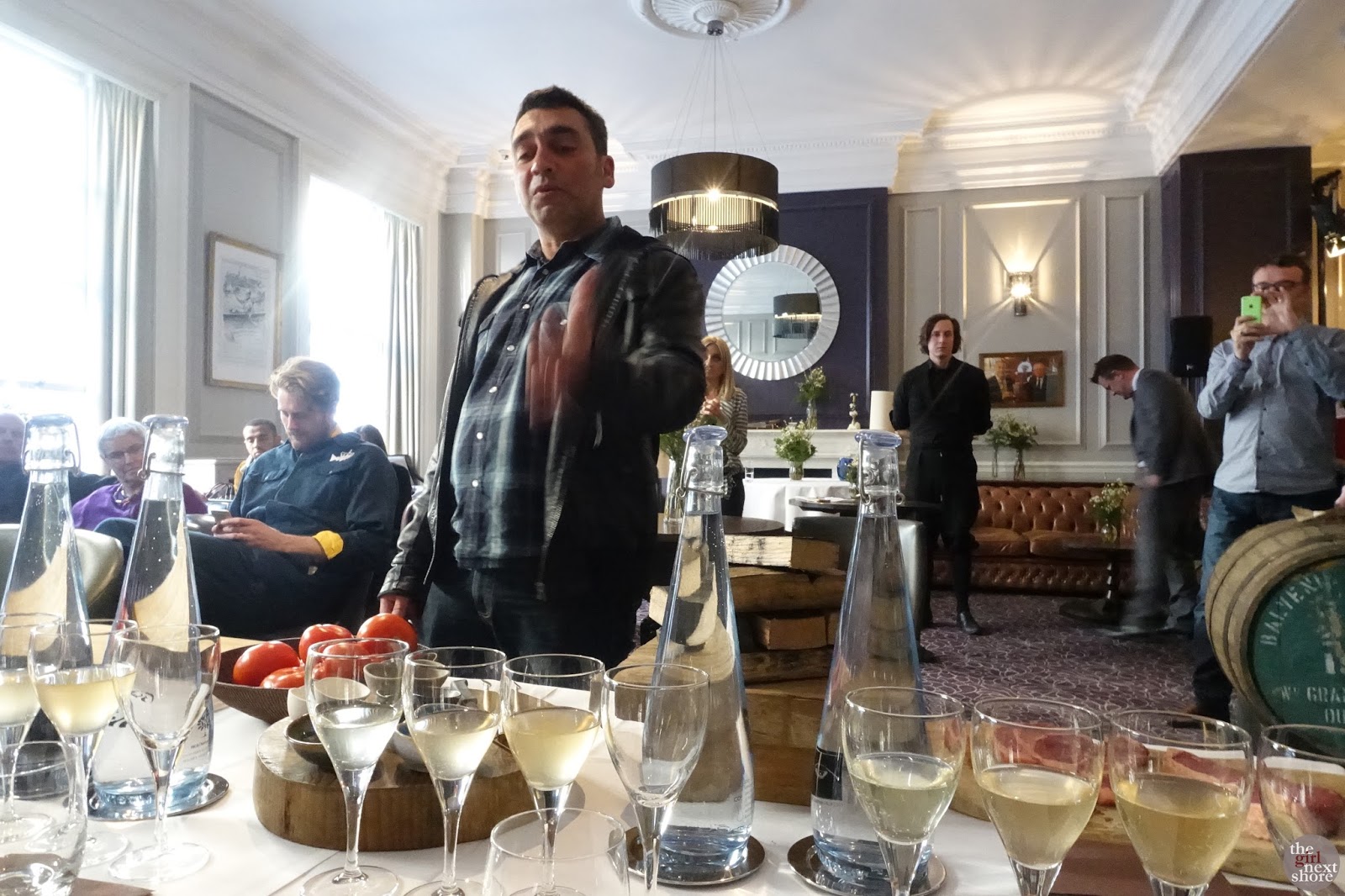 First up was Simon Roberts, a sparkling wine producer from Ridgeview Wines (who reminded me of an uncle in the 80s). 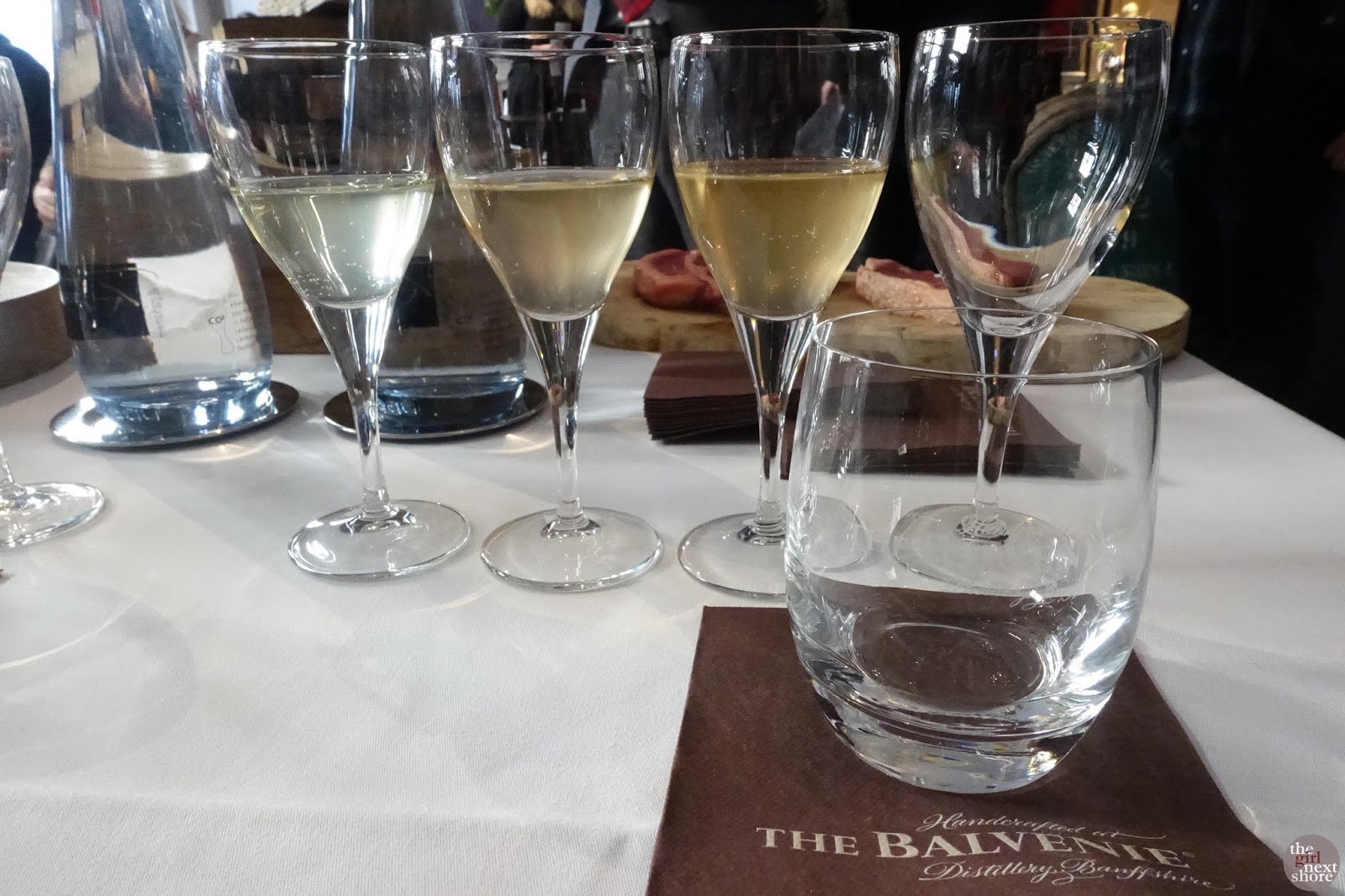 We were served three glasses of wines in their relatively raw forms (a chardonnay, a Pinot Noir and a Pinot Meunier) all waiting for maturity. After tasting, we were instructed to mix all three to produce our own concoction and the blended drink actually tasted decent.

It felt like we made something out of nothing, and for a minute there we were all craftsmen too. 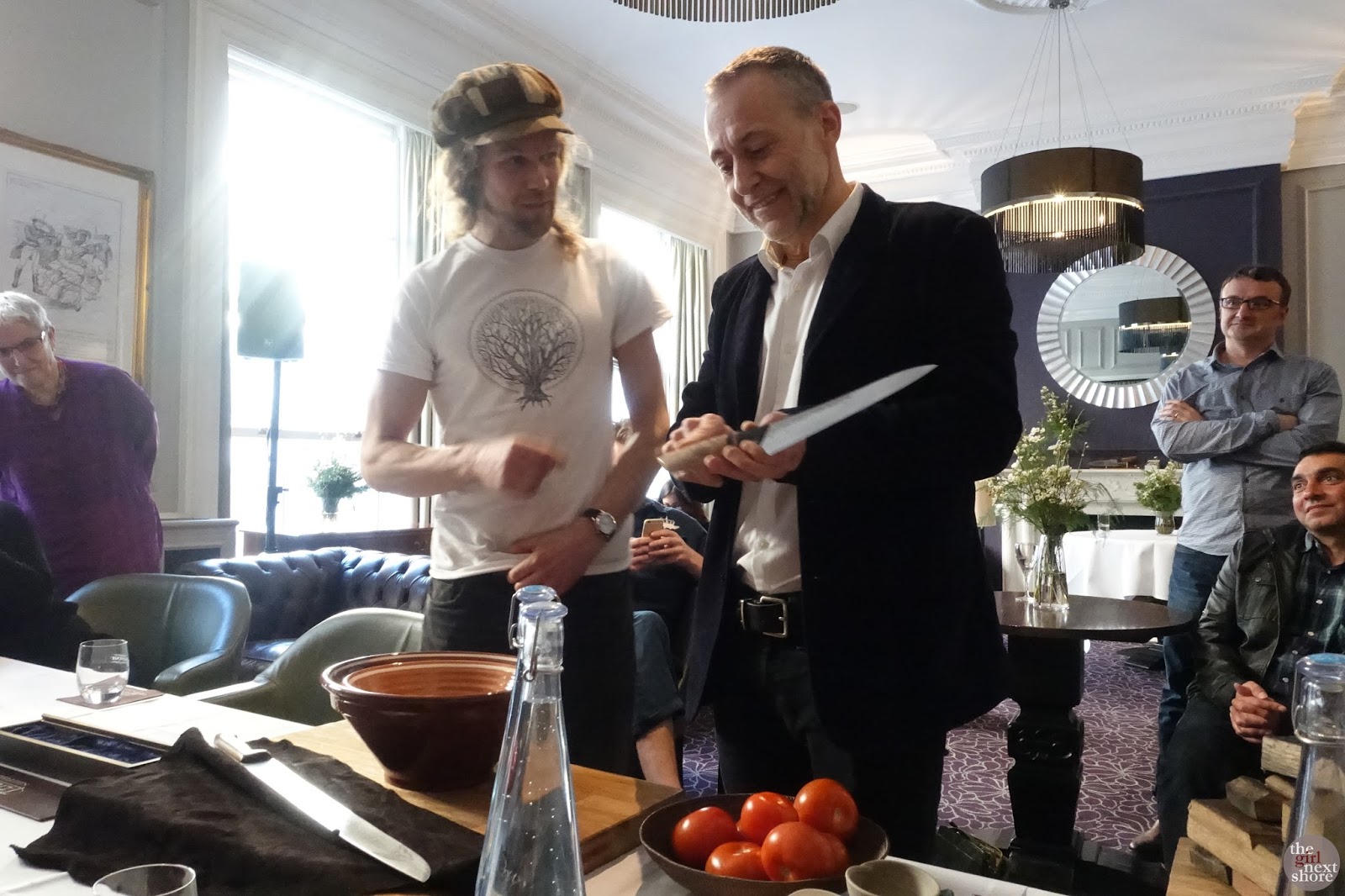 Next up was Will Ferraby who is one of the last of his kind. Ferraby Knives are extremely special, lovingly made with care and legacy. 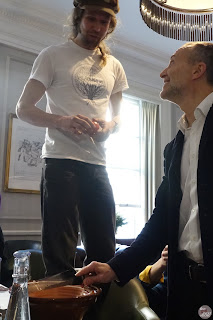 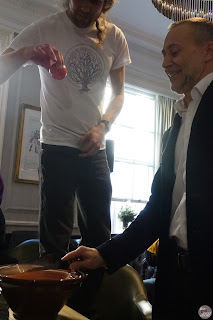 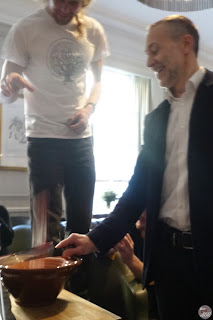 The sharp test: Find a tomato, drop tomato, watch it get chopped. A case of now you see it, now you don’t, it was quite fascinating how the tomato literally bounced on a normal kitchen knife and how it perfectly went through the Ferraby knife. Very cool. 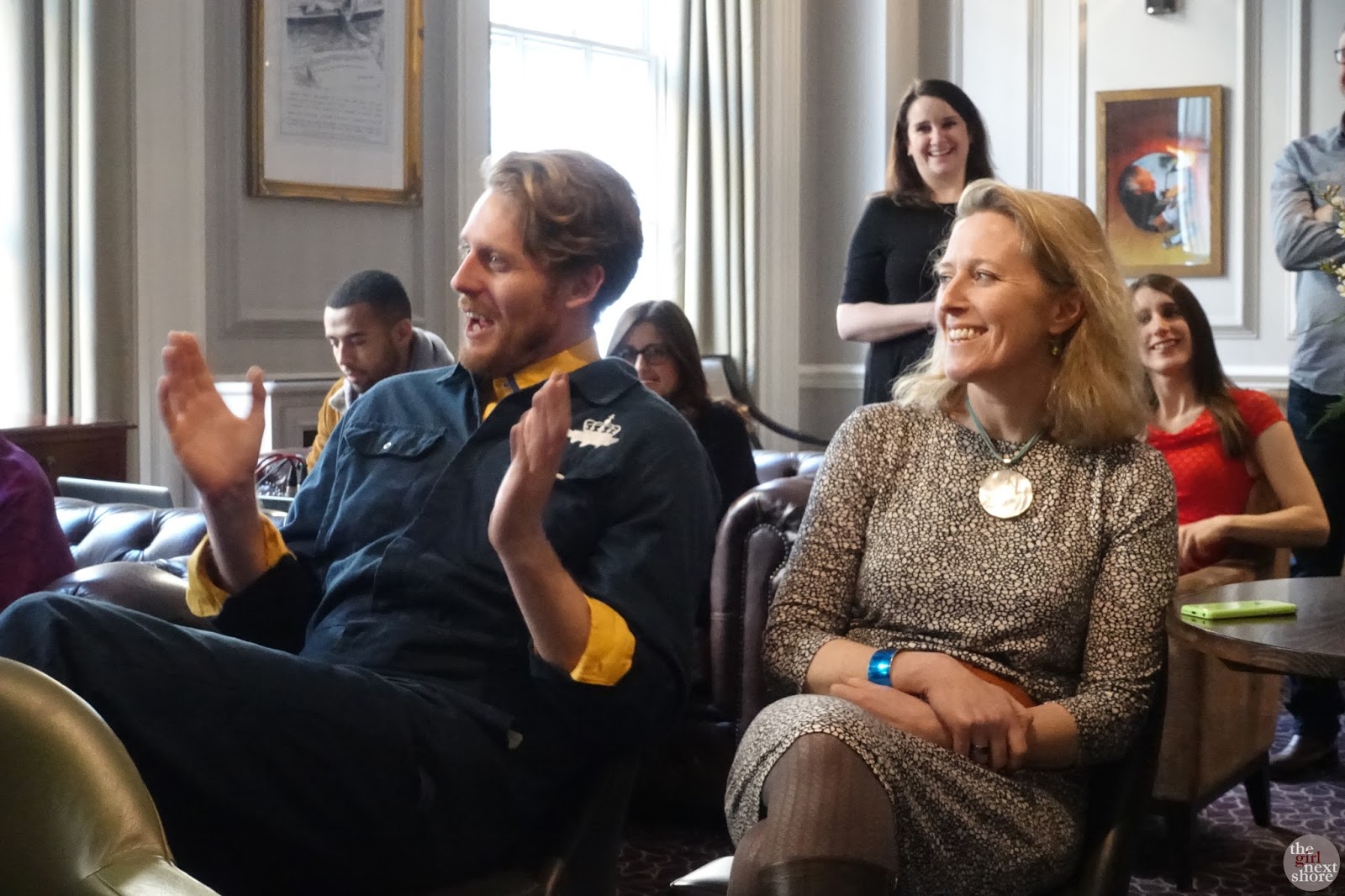 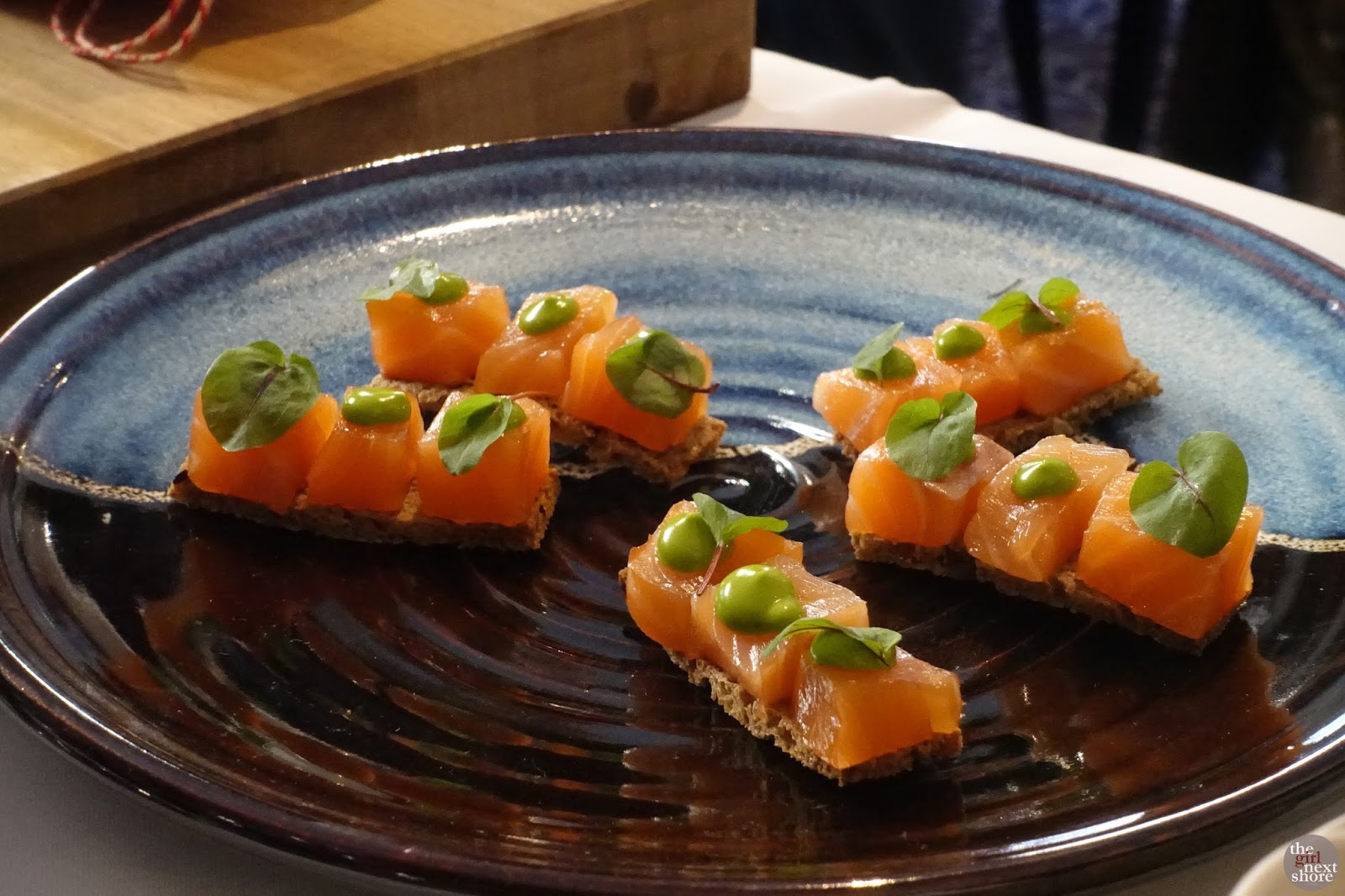 We were then served the first of the canapés: smoked salmon with sorrel. The fish itself was beautifully fresh and the sorrel gives it a balanced acidity. 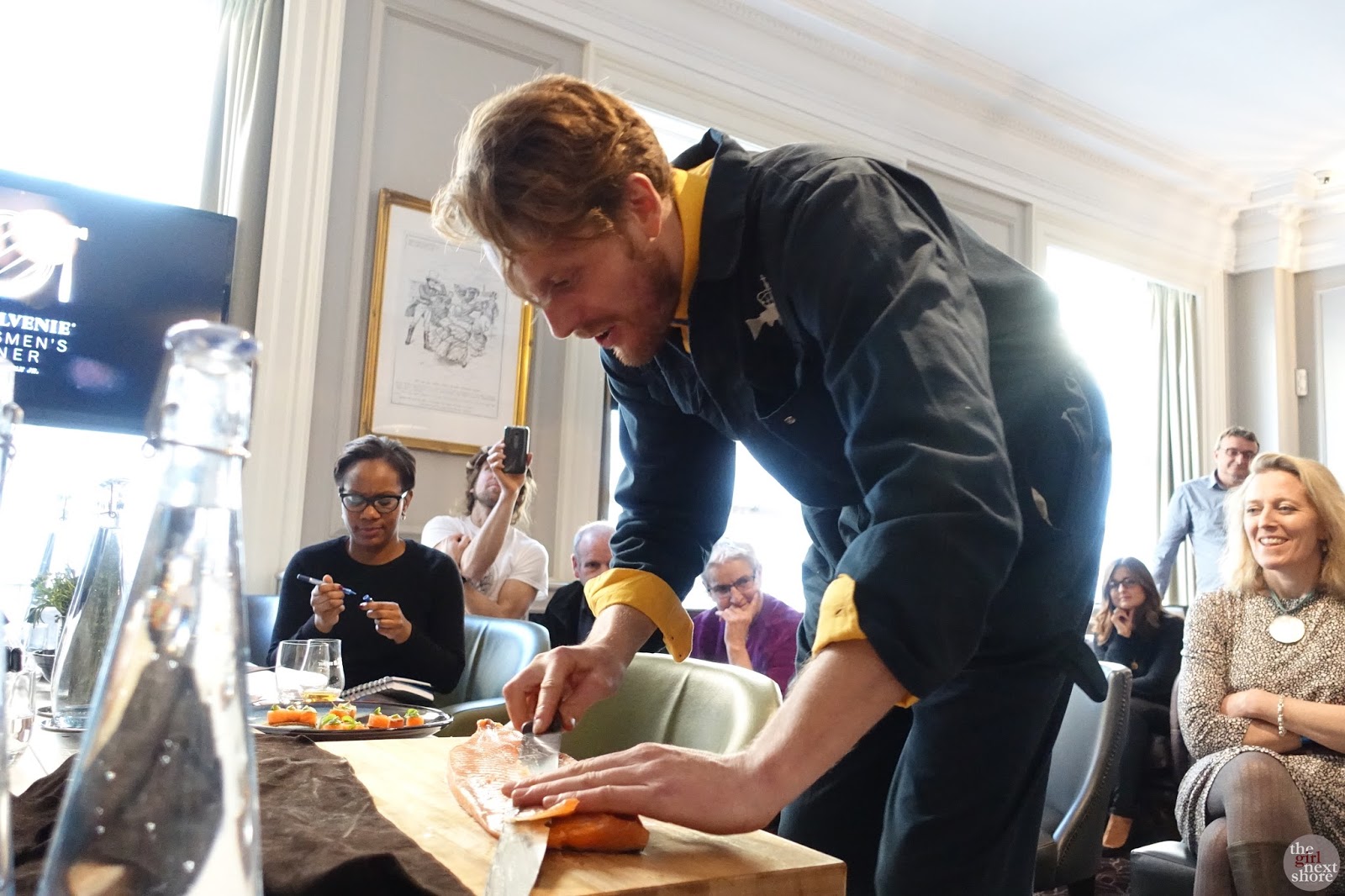 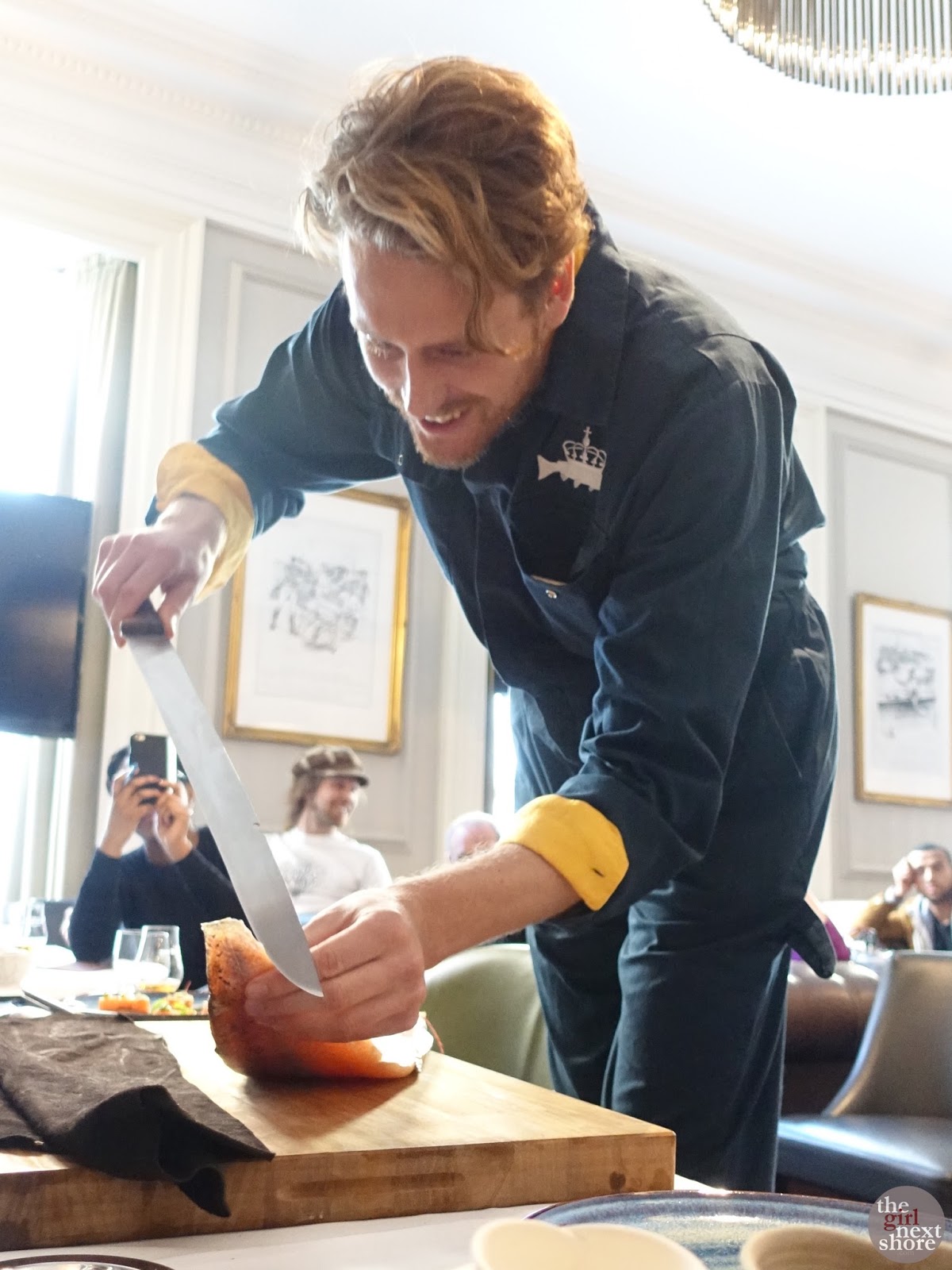 We then met Ole Hansen of Hansen & Lydersen, the smoked salmon producers. Ole had a rather nostalgic story but he’s a funny music-loving chap who often sings to his salmon. If this is what makes the fish taste delicious, then I pray all fishmongers take vocal lessons. 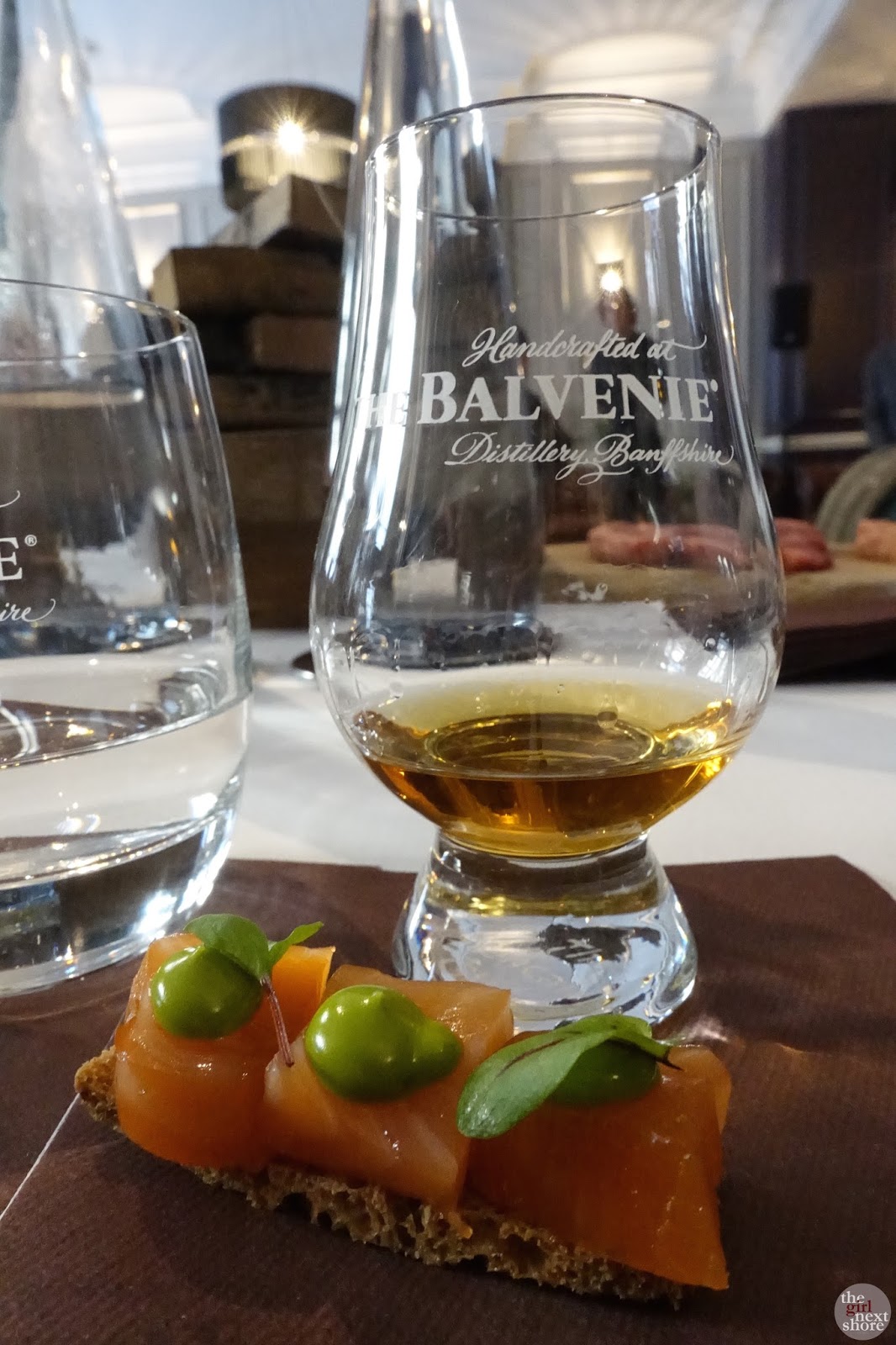 Ole’s salmon was paired with the Balvenie Carribean Cask, a 14-year old whisky matured in American oak and finished in a rum cask. It was quite an easy and pleasurable whisky to drink, with notes of vanilla and honey (Michel likes this a lot, too). 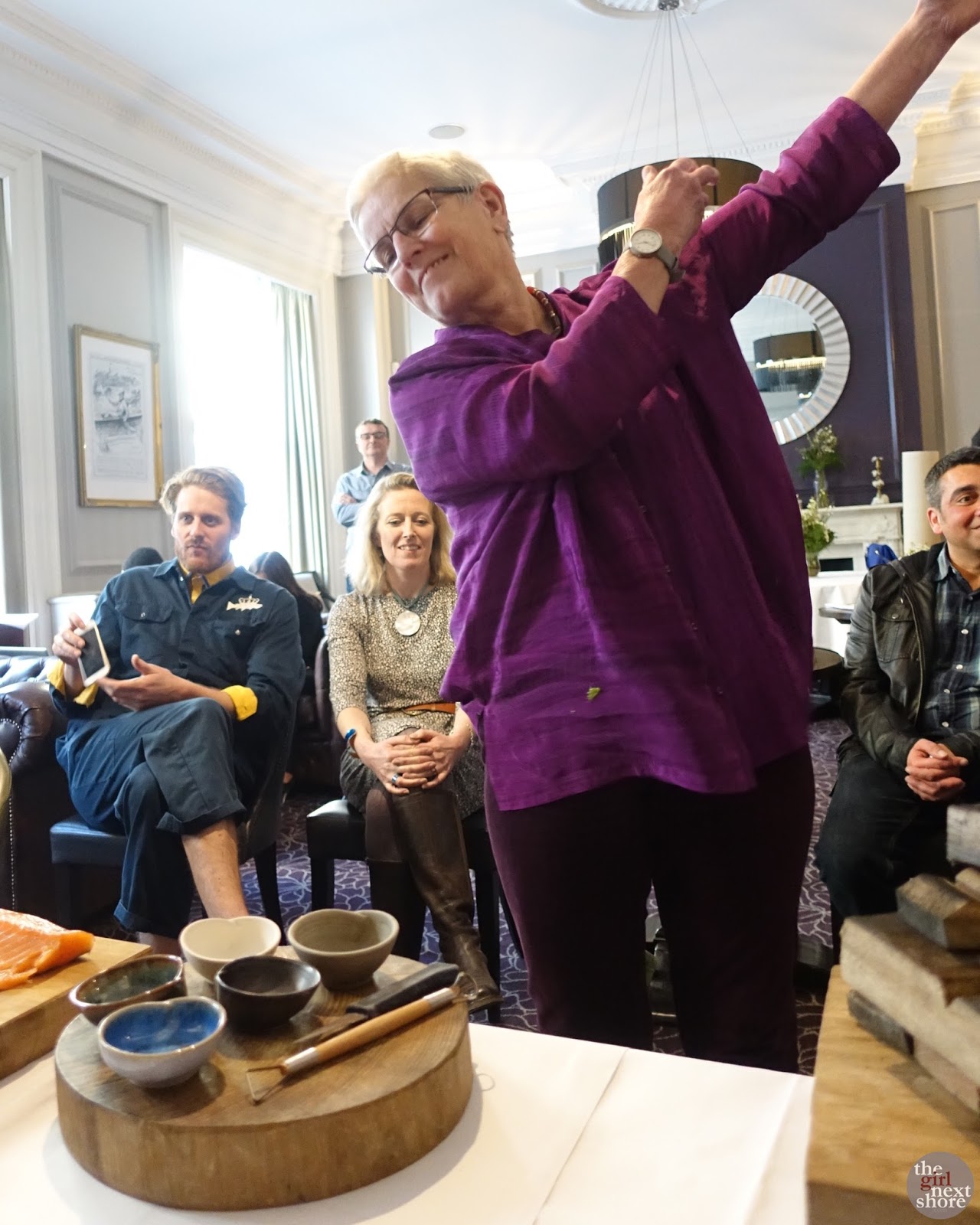 Next up was Naine Woodrow, Master Potter at North Street Potters in Clapham. She talked about her training in Japan and her process in making her beautiful pottery (which seemed like a very, very, very hot feat!) 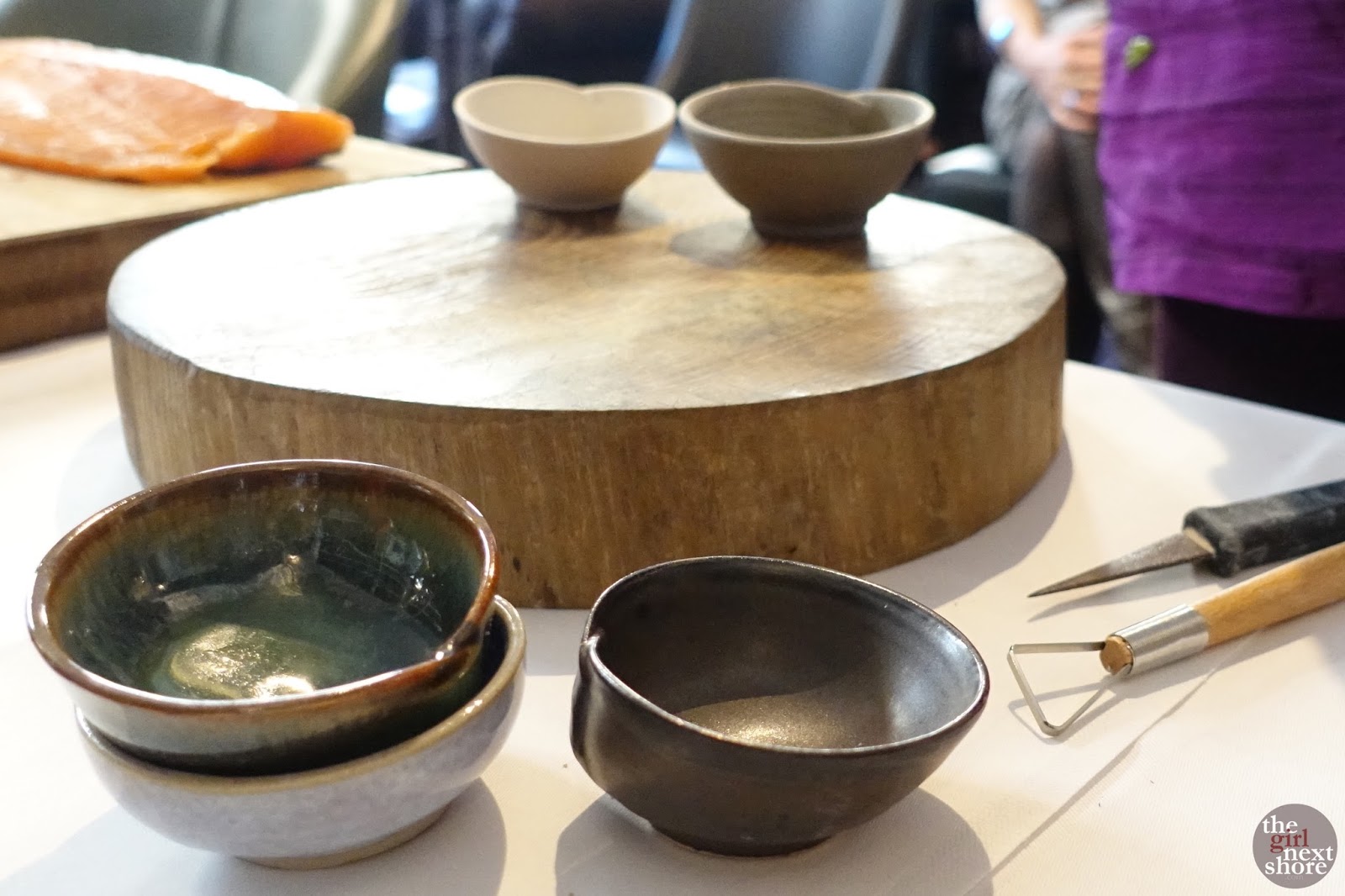 Naine’s ceramics were not just beautiful but functional, too. Michel actually uses them in his restaurants. 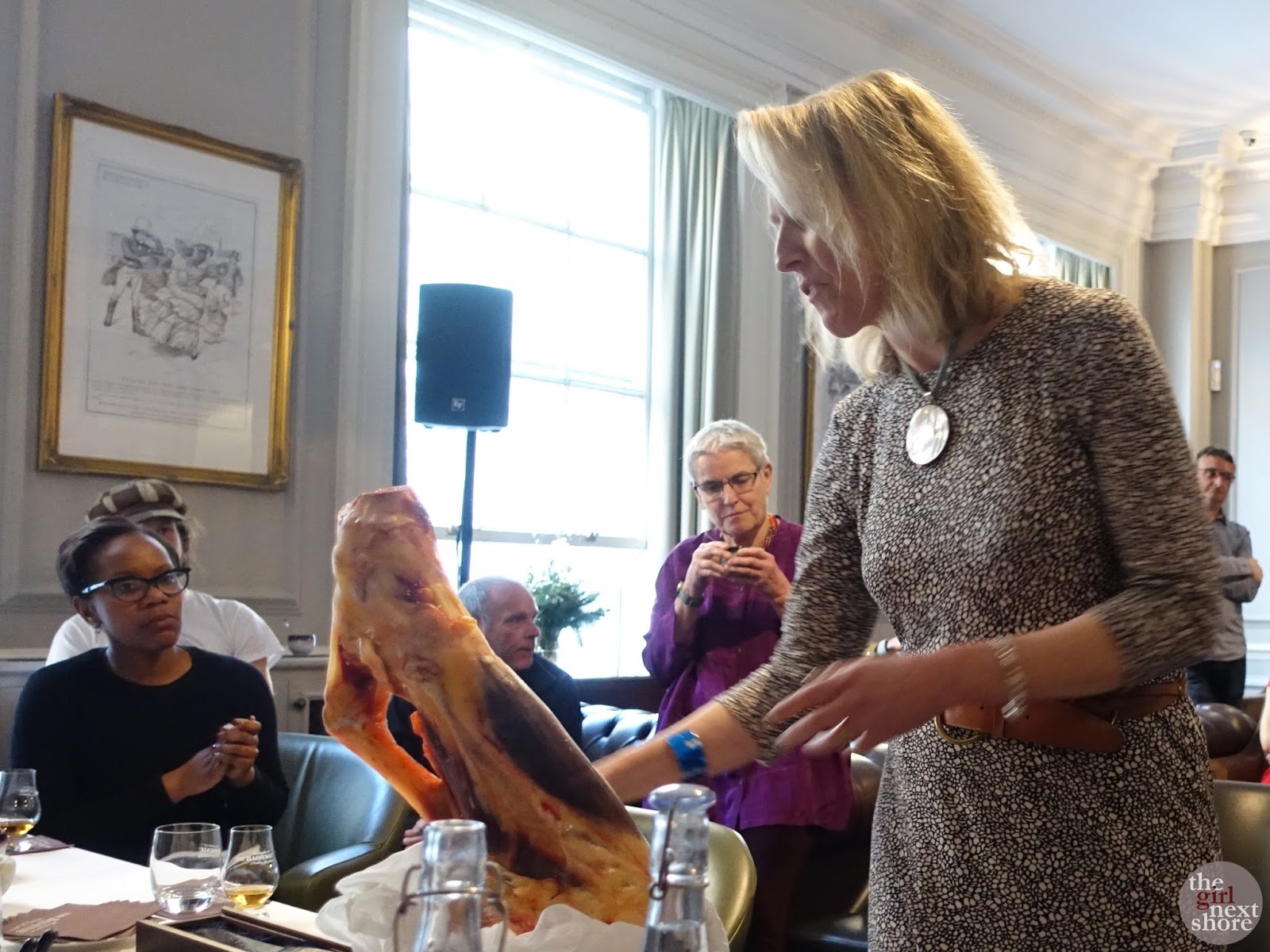 Sascha Grierson of Grierson farms presented us with a beautiful shin of cow. I can’t tell you enough how passionate Sascha was talking about their farm and how important it was for them to produce everything organic. It almost felt like listening to a homage to the beautiful animal which gives us such beautiful dishes. 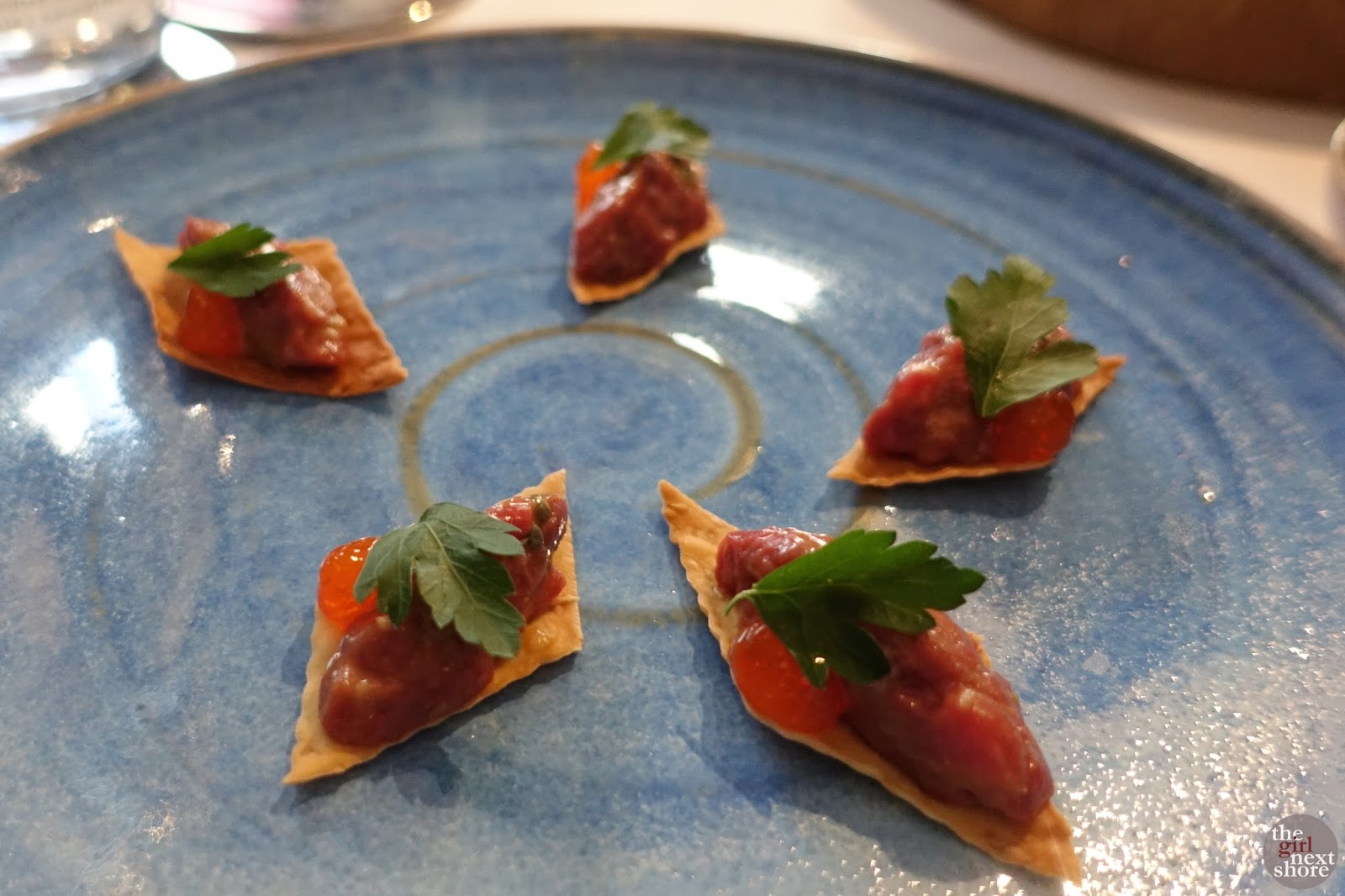 We got to sample the organic Grierson farm fare – in three ways! First in tartare form which was melt-in-your-mouth delicious (and I may as well have eaten someone else’s portion… oops!) Supergrass-fed beef is definitely yummy in its raw state! 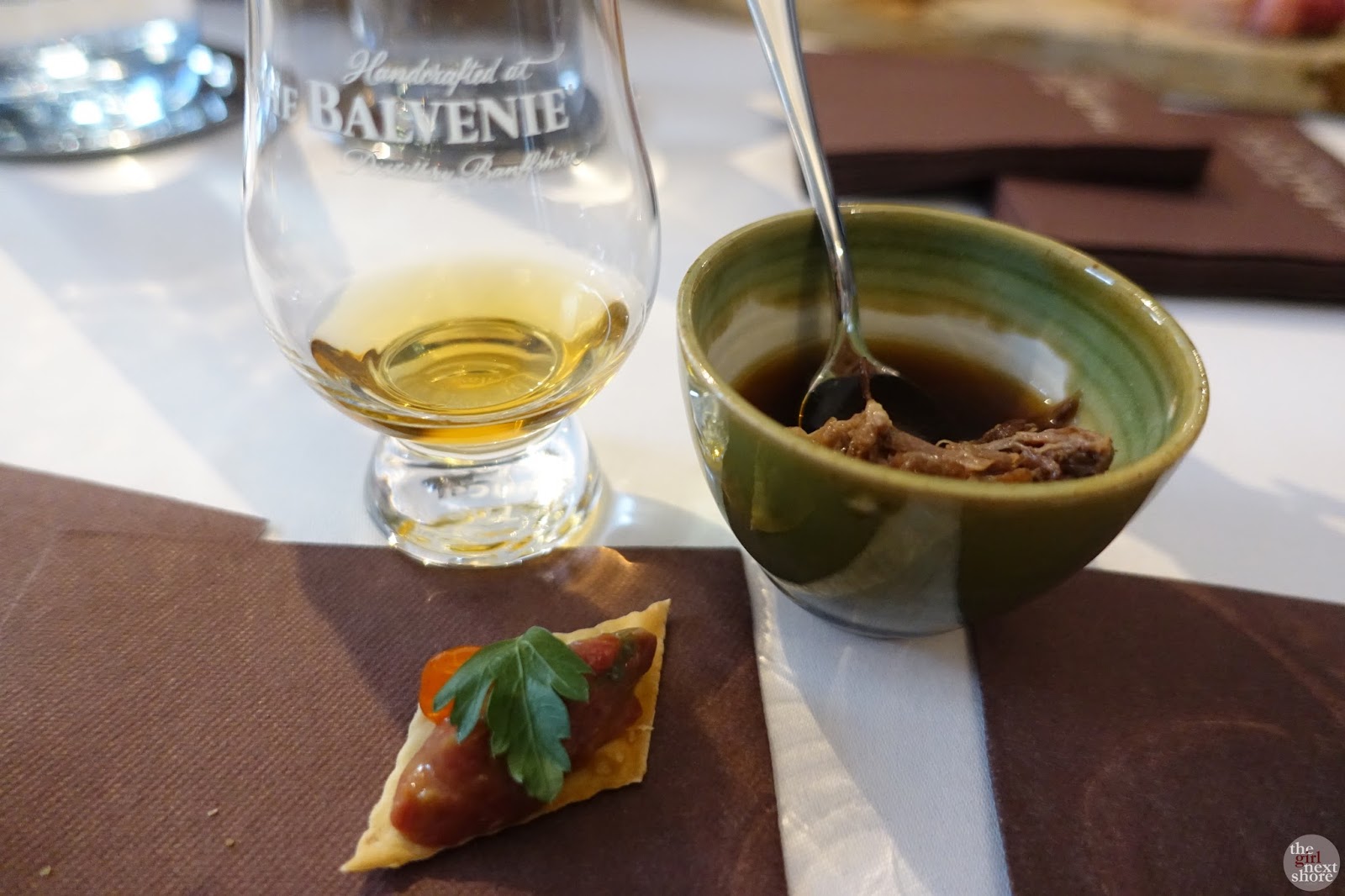 We were also served a consommé made with the beef broth and whisky. The beef was so tender and you can say it was of premium quality. 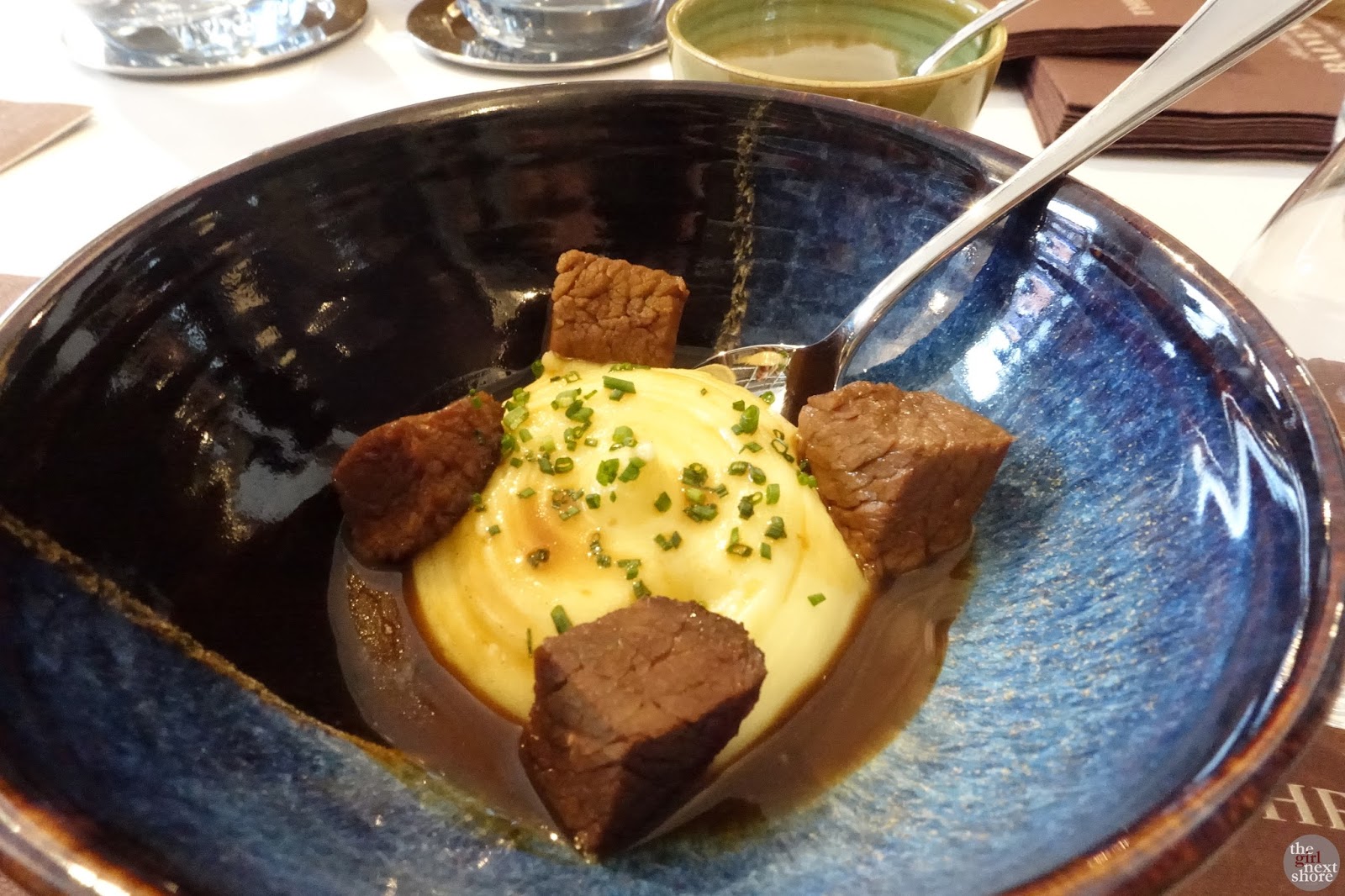 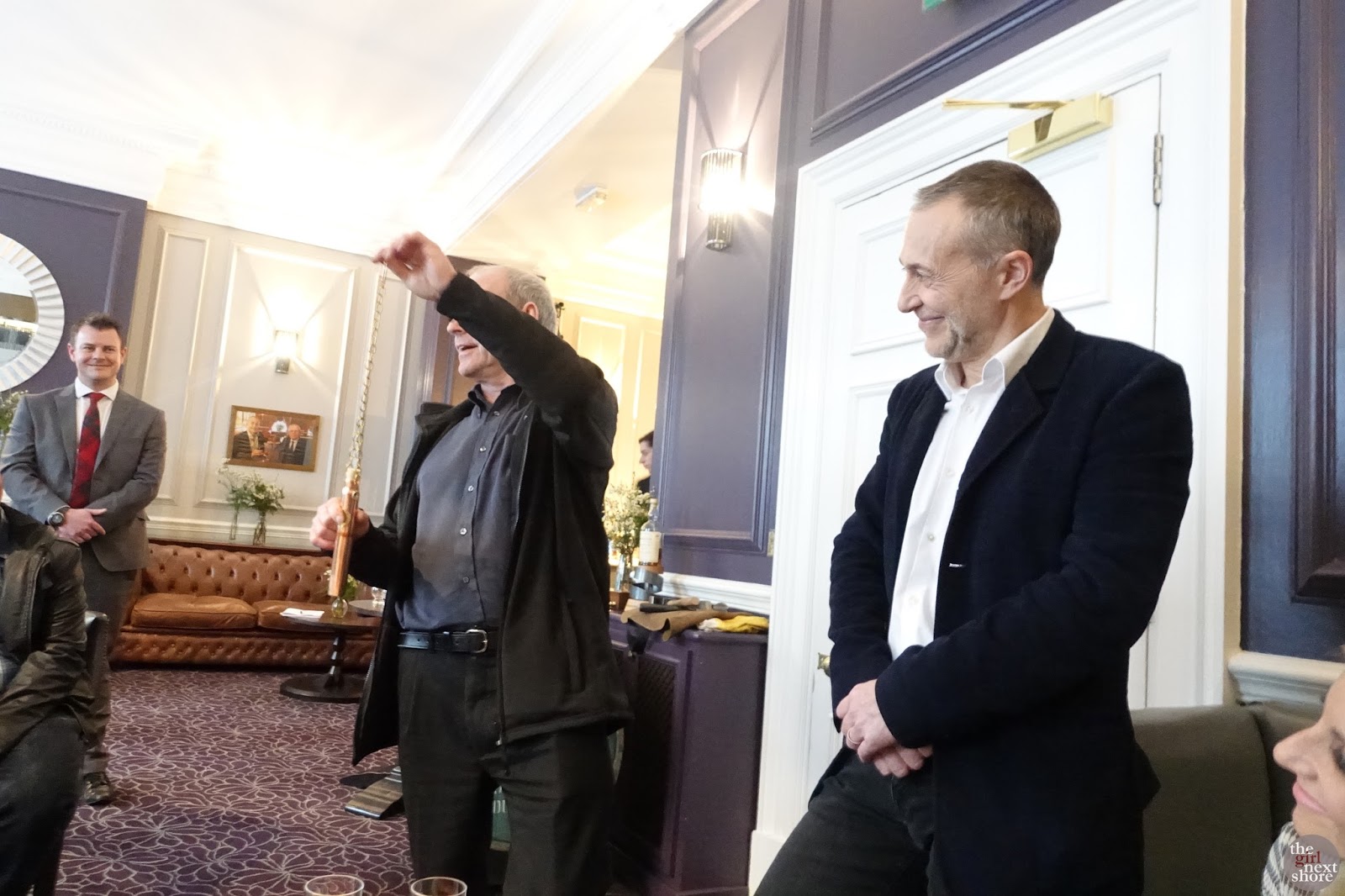 Last but not the least, Michel introduced us to The Balvenie’s Head Cooper. Ian McDonald has been making casks and barrels for a while now and he told us of tales how people used to steal stuff from distilleries. Essentially, they “dip a dog” (copper pipe that holds liquid) inside a barrel attached to their belts then easily slipping it out unnoticed. 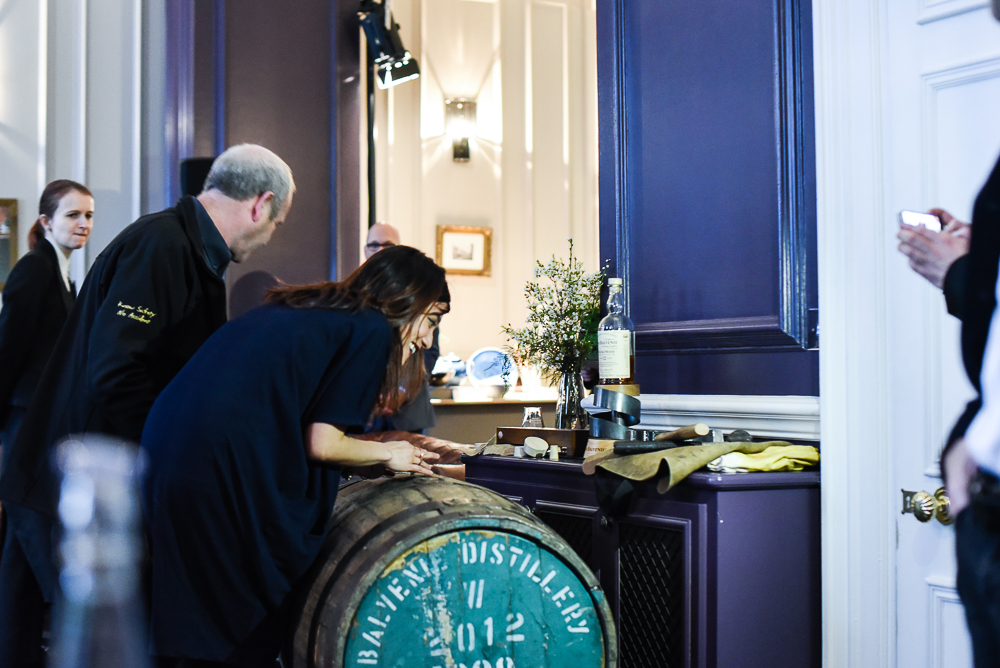 I even got to dip the dog myself! (Thank you Angie for this photo!) 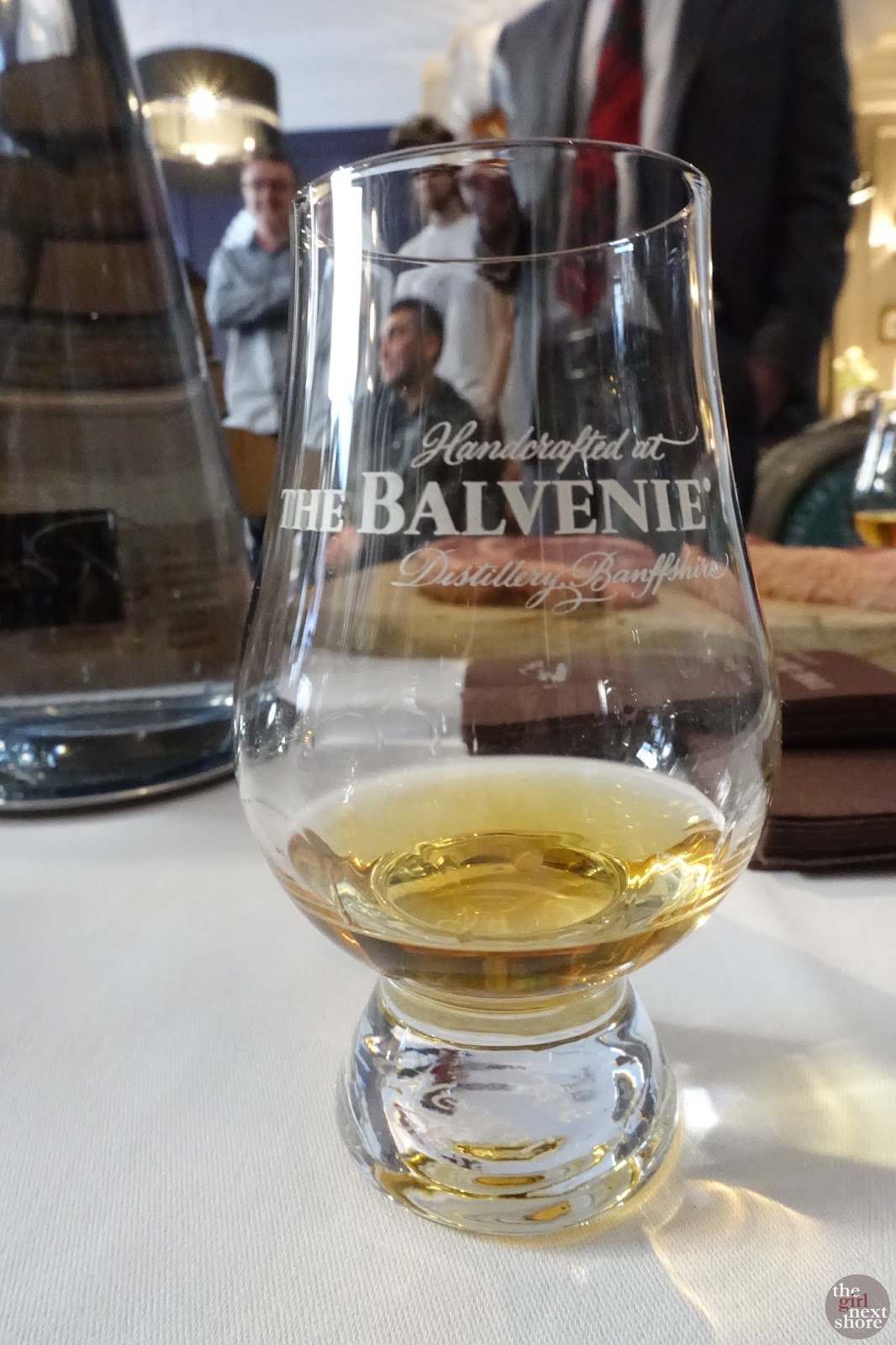 Last of the whiskies was The Balvenie 25-year old single barrel. Now this, I absolutely loved. Released in batches and drawn from a single American oak cask, a bottle is no more than 300 which is why retail price is around the £350-400 mark. There’s a slight hint of sweetness to it, but it’s much bolder and smokier in flavour. 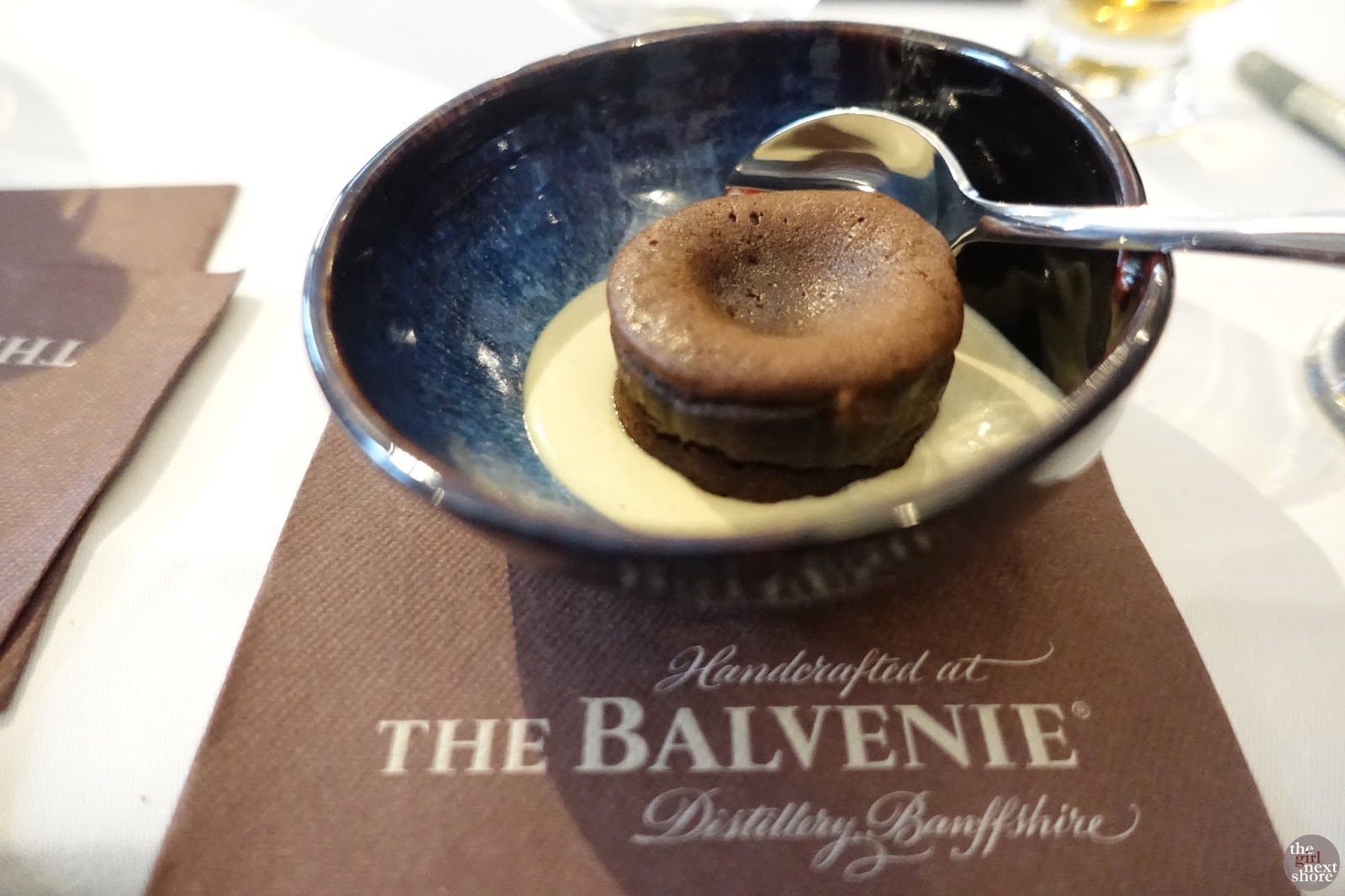 And of course, a sweet ending of chocolate fondant with a gorgeous whisky-infused custard was necessary. 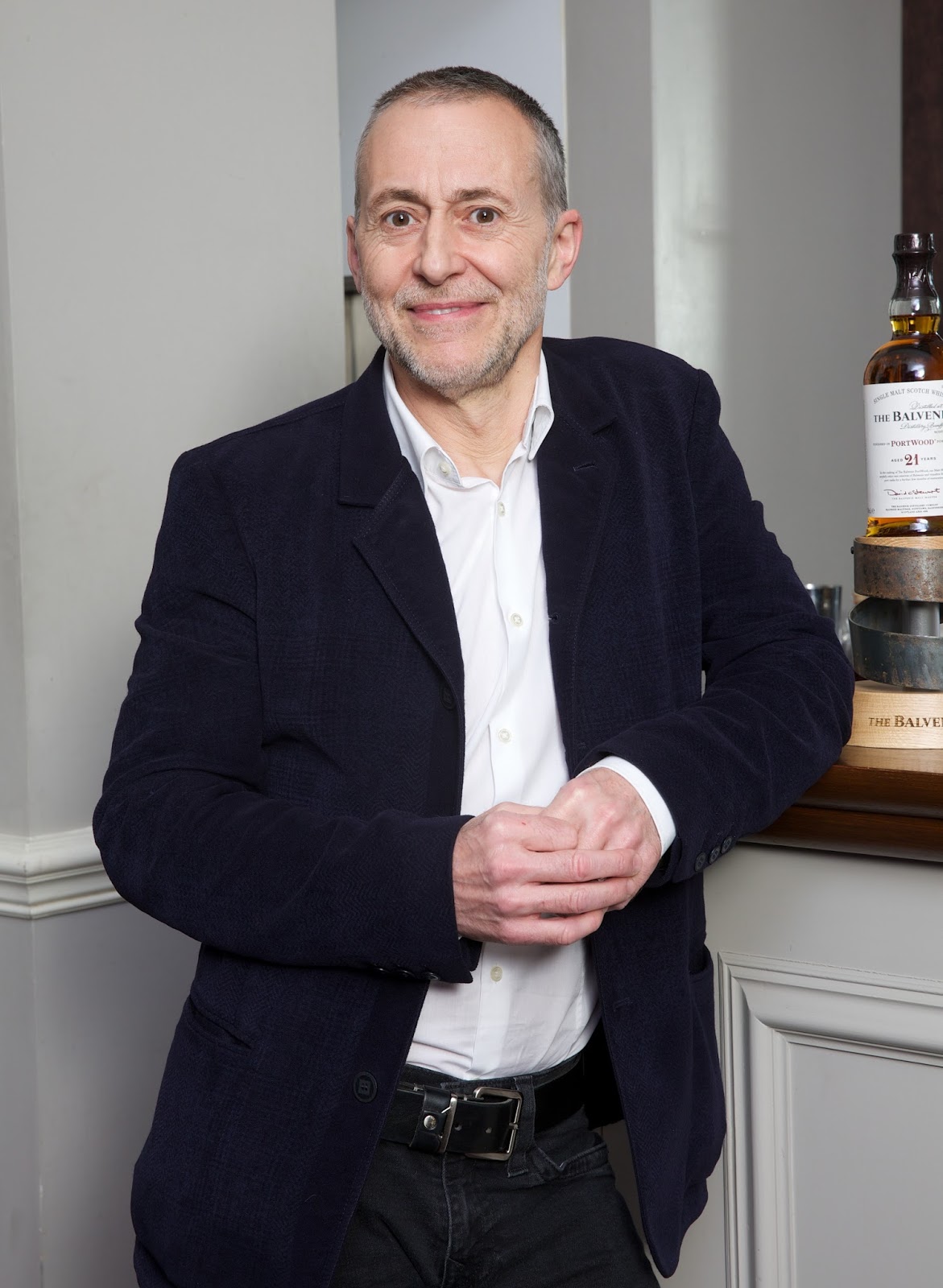 (Photo by Tin Man Comms)
But the sweetest ending was actually spending time with the culinary craftsman himself. I got to chat a bit more with Michel about The Craftsmen’s Dinner and how awesome it was to celebrate people who have dedicated time and effort to master their crafts – just like him, and his family of chefs (his daughter Emily is in the industry now, too).
I also got to commend him for his culinary work and socially relevant projects particularly Kitchen Impossible. I got to talk to him about my sister (who has Down Syndrome). He fondly talked about Annalie, one of the stars of the show and how she’s still working at a sushi chain in Hammersmith. He says we still have a long way to go in terms of helping people with disabilities join the workforce, but every little helps and there ain’t nothing wrong with baby steps.

When I asked him what he thought of food bloggers and the idea of “1000 food snaps before a spoonful” he said he was absolutely okay – as long as people do not use flash – because we are, after all, the same punters they aim to please.
And then the cutest moment happened. He said “Oh, I take photos of food, too!” then pulls out his phone to show me a snap of some prawns he ate earlier in the day. TEEHEE!!! I saw his apps! Hahaha.
Lastly, I couldn’t resist asking him to recommend three of his favourite places to grab a bite in London – other than Le Gavroche. His answer? The Dairy, Trinity, and Gymkhana. 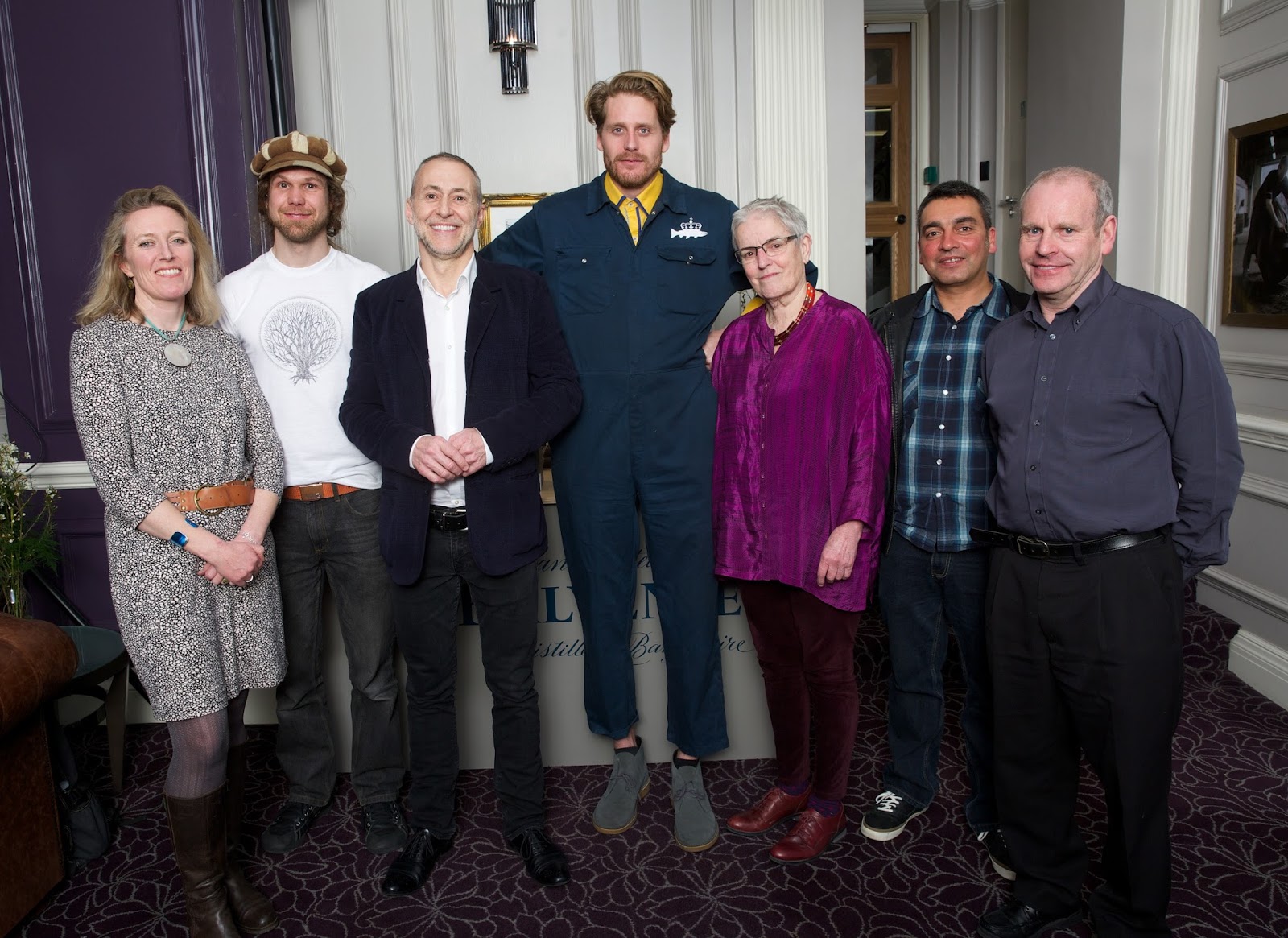 What an incredible experience meeting these craftsmen in the flesh. They were all equally as good as their skills and products and their stories are just fantastic.

The shorts go live on a fortnightly basis, so mark your diaries and discover the beauty of craftsmanship. It’s emotional and absolutely fascinating.