MOments is run by the world’s first female chef to hold seven Michelin stars across her portfolio of restaurants, Carme Ruscalleda. Known for her inventive themed menus (check out her space-inspired menu at her three-starred joint, Sant Pau), chef Ruscalleda’s strength lies in an inspired flair for Catalan cuisine.

We went for the 13-course tasting menu (171€) which apparently had just changed when we visited. Whilst the previous offering was inspired by cities that host Mandarin Oriental hotels, the new menu was prompted by the love of the seventh art – cinema. Being a film junkie (come on, Netflix and chill), I was really excited to see some of my favourite classics on the list. “Cinema tickets”, popcorn and wine ordered, we pressed play to see whether it’s yay or yawn.

BREAKFAST AT TIFFANY’S – I was so so excited to see this translated onto a plate because I LOVE AUDREY HEPBURN and I LOVE THIS BOOK/FILM.

We were served a paper bag and a coffee cup, which much to my delight contained a savoury donut and ham soup. The brioche, filled with sobrasada, was insanely good. Chased with the ham soup, the flavours of pork were celebrated in small bites. I wish there were more of the brioche because it was really beautiful. Holly Golightly would’ve been proud.

PA NEGRE – Also known as Black Bread, this critically acclaimed Catalan film was the first ever Catalan-language film to enter the Oscars.

In comes a beautiful bread soup with mackerel and pumpkin chunks. I usually dislike bread soup but MOment’s offering was smooth and light to the palate. I loved how the flavour changed when eaten with the mackerel as compared to when you have it with the pumpkin.

COMO AGUA PARA CHOCOLATE – Laura Esquivel’s novel was one of my favourites growing up. I have long envisioned and salivated over the character Tita’s quail mole stew. When the film version came I wanted to lick my screen as all the recipes came to life!

True enough, MOments served pulled quail in mole sauce atop a coriander tortilla, soft taco style. There was so much meat in it and it was tender, smoky, and strong. I loved that this was a refined version of the street food, and that we are expected to eat with our hands. It was every bite delicious and was one of the highlights for me.

TITANIC – I mean if you’ve not seen this epic film then I don’t even know what to say to you. Haha. The fate of the ship may have been tragic, but when our plate came I knew it was gonna be fantastic.

Described as “marine elements” and chantilly, MOments’ “Titanic” was a chowder with pieces of seafood: mussel, clams, squid, scallop… and a boat-shaped squid ink crisp. It was comical, but the taste was actually fab. The chowder was light and well balanced with flavours of the individual seafood coming into light.

MUJERES AL BORDE DE UN ATTAQUE DE NERVIOS – aka Women on the Verge of a Nervous Breakdown. I’ve actually not seen this film, but it’s a classic Spanish black comedy that’s won a number of awards. Plus – young Antonio Banderas.

In the film, one of the characters finds a pot of gazpacho spiked with sleeping pills. Luckily, there was nothing sleepy about MOments’ offering. In fact, I hate gazpacho but I loved this. Complemented by hints of black and white garlic and chunks of manchego, it’s thick, hearty and rather refreshing. 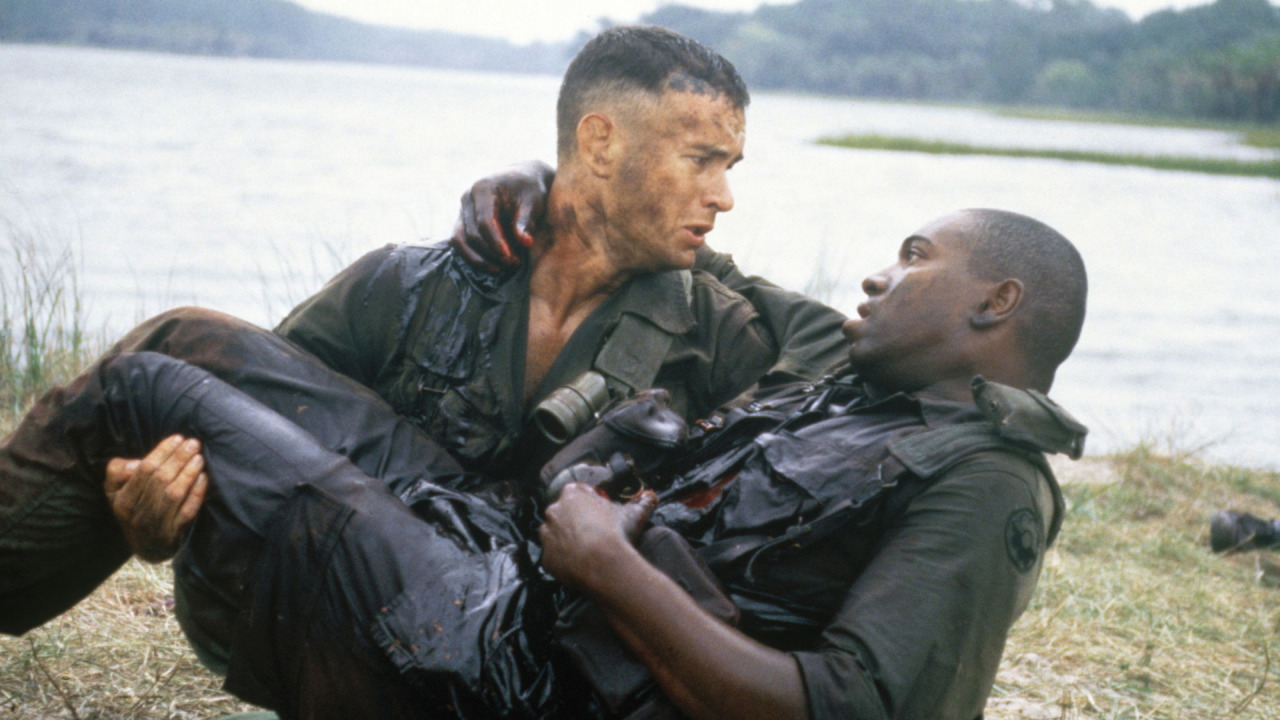 FORREST GUMP – Life is like a box of chocolates, but that seen with Forrest carrying Bubba was really heartbreaking. So in celebration of Bubba’s crawfish/shrimp/prawn dreams, MOments came up with two fantastic dishes with Mediterranean red prawns.

The first is a lone shrimp lying on a bit of tomato chutney and pea puree. Guys, I kid you not when I say this single prawn bite was the best I’ve ever had. PERFECTLY cooked, the flavour just popped and I had to suppress myself from asking for another one of those.

The next prawn dish was a beautiful, modern Spanish take on ceviche. The prawn, sweet in its rawness,is chopped into pieces and mixed with a creamy mango salsa. The legs are tempura-ed to add an extra crisp and it’s all served in a squid ink doily. A fantastic bite of food and could make up as a really sophisticated canapé.

007 IN OCTOPUSSY – James Bond is one of the reasons why I wanted to be a detective/spy when I was growing up, with my Dad constantly watching the films. Admittedly, Octopussy wasn’t my fave 007 movie.

The dish, however, was quite a standout and a technical triumph. The rock octopus is sous vide and turned into a cannelloni, housing a filling made of potatoes and paprika. It’s quite an inventive way to showcase the classic flavour triumvirate. And the textures are so well thought-about – there’s crunch and chew and crisp and bite – absolutely right up my alley.

THE WIZARD OF OZ – Another one of my favourites growing up (I also liked Frank Maguire’s spin-off novels and have seen Wicked three times), this dish was definitely one I was excited about.

A cloched dish appeared before each diner. Before the reveal, we were told to wear our 3D-esque glasses. As soon as we’d all settled in our choice eyewear of the night, the servers picked up the cloches…

And there we were, right bang in the middle of Emerald City! Just like Dorothy and her friends!

The dish itself was a work of art. Fillets of red mullet lay atop Mediterranean-spiced couscous and served with white and green asparagus and carrots.

It was a beautiful plate of food in all sense of the word. The fish was so tasty on its own and the dressing, made with a silky light Hollandaise sat around the plate, like a winding yellow brick road. It was clever, and cleverly delicious.

THE SILENCE OF THE LAMBS – Hannibal Lecter may be one of the weirdest serial killers of all time but we do share one thing : we’re both almost always hungry.

It was no surprise that this carnivorous dish came with the jus and pomegranate sauce splattered on the plate Dexter-style. But what surprised me was how much I loved it considering lamb is one of my least favourite things to eat. The meat was pretty in pink and tender to the bone. The sauce had great depth and a hint of zing. There was a lot of it but it didn’t steer much from the great flavour of lamb.

OBVIOUSLY, it wasn’t gonna end there. We were served… lambs brain! It looked rather icky but truth be told, it wasn’t as bad as I thought it would taste. The texture is fairly similar to sweetbreads and the flavour is a bit stronger, but there’s no massively shattering aftertaste. Would I eat it again? Er, if I really have to.

RATATOUILLE – I know as a foodie I’m meant to love Pixar’s Ratatouille but I just really found the concept of rats prepping food a bit disturbing. *shudders*

There was, however, nothing disturbing about the cheese plate it represented on the tasting menu. OMG. From the sheep milk, to the goat’s milk, to the manchego and the comte; From the apple jelly, tomato puree, quince and artichoke chutney… this was such a delicious cheese plate and they were so generous with the slices, too! 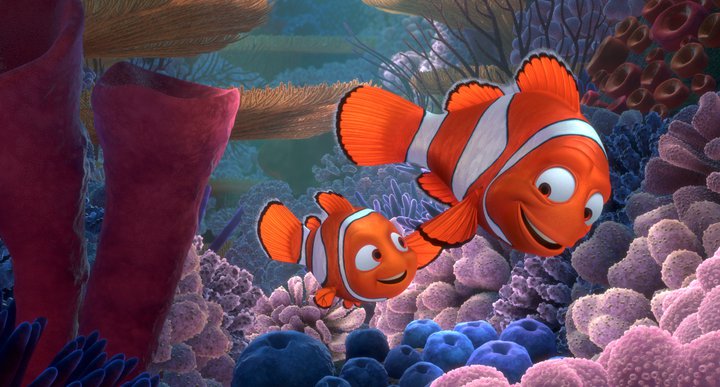 FINDING NEMO – Now this Pixar film made me all fuzzy and comforting. I wondered whether MOment’s translation was just as good.

The presentation itself was as cute as a button and actually got us giggling like kids.

Once “Nemo” swam off, we were left with a salted almond panacotta with white chocolate corals. Admittedly, the panacotta was set nicely and the saltiness was quite a surprise.

PULP FICTION – I mean if Mia Wallace’s $5 milkshake was the reason she got fuelled enough to create one of the most iconic dance scenes in film history, MOments was sure to recreate it for punters.

It was, however, not a milkshake but a parfait disguised as one. Cream, banana ice cream, a little bit of soda, white chocolate layers and lots and lots more cream. I was a bit underwhelmed by this dessert, to be honest. But I didn’t mind because the final dessert is inspired by one of my ultimate favourite films of all time…

CHARLIE AND THE CHOCOLATE FACTORY – I mean how can you not fall in love with this film (I’m talking about the Gene Wilder version, mind you). I know I’m a chocoholic through and through but this film really ignited my wildest imagination and love of food.

MOments created a plate of chocolate with chocolate and chocolate to commemorate the film. It was rich, fun, and indulgent. There was a smooth ganache, crumbled cake, choccy pebbles, matcha chocolate, mushroom candy buttons with hints of passionfruit and berries. It’s every chocoholic’s dream.

I’m not going to lie. I loved the concept of the new tasting menu at MOments. I feared it was going to be very gimmicky but it really wasn’t. The dining experience was absolutely interactive and fun. Compared to say, our meal at Lasarte, it was slightly more relaxed due to the themed menu. As a film buff, I loved the apparent movie references but I also loved that even if you’re not a film buff, you’d still enjoy the experience.

Our servers were ever so helpful particularly the maitre’d who was very funny. There were bits and bobs that I found odd though – ie the only amuse bouche we really got was a teeny bag of popcorn, and we didn’t get bread until much later along the meal. But hey, little things you know?

The vibe had that Barcelona coolness about it. Most punters seemed like they were there for special occasions, creating moments as families, lovers, friends. It was a nice place to be at and the look on everyone’s face as the dishes arrived was really fun to see.

All that said, my MOments experience was really incredible. The food was pretty delicious, modern and adventurous. Chef Ruscalleda and her team are seriously to be applauded because that menu was worthy of its own Walk of Fame.

GO and have an amazing gastronomic red carpet walk.